From the producers of The Night Manager, a new le Carré series storms onto the BBC: The Little Drummer Girl

6 CW readers are interested
The Little Drummer Girl episode one review 5 The Little Drummer Girl episode one review Dan Einav
John le Carré adaptations have had their ups and downs, but they always possess something of an old-school fascination. Even 2016’s Our Kind of Traitor is absorbing in its own underwhelming way. But much of big- and small-screen le Carré is successful, The Night Manager being a famous example. Now comes the next series from the same producers: The Little Drummer Girl, directed by legendary Korean filmmaker Park Chan-wook. And, judging by its first of six chapters, it looks to be the most enthralling adaptation yet.

Florence Pugh (Outlaw King) is Charlie, a bluntly spoken actor who’s part of a group who perform plays in cheap theatres. They go to Greece and a mysterious, well built ‘action man’ (Alexander Skarsgård) circles around them, repelling and enticing Charlie’s attention. Meanwhile, the Israeli counter-terrorist official Kurtz (Michael Shannon) is investigating a Palestinian family of terrorists and their Europe-scattered plots.

Charlie is free-thinking and fiercely blunt, almost unable to stop speaking her mind, and ‘action man’ Peter is the opposite in his wordlessness. Writer Michael Lesslie builds their relationship carefully, slowly – and as they connect, it’s easy to forget where you are. 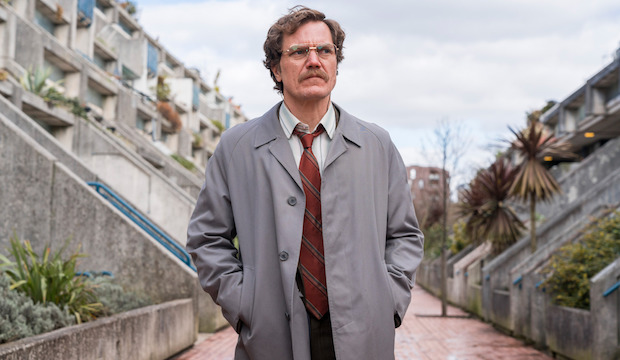 Counteracting the romance is the espionage operation led by Kurtz, a man with a rock hard shell and something soft buried deep – a part that seems specially made for Shannon. Unlike his boss or colleagues, Kurtz doesn’t want to kill or capture the terrorists as soon as they’re seen, despite all the horror they’ve inflicted on the world. He prefers the long game, staking out until they fully comprehend the plight of the said terrorists.

Although the historical context isn’t entirely clear for those not knowledgeable about Europe at the end of the 1970s, there’s no confusion about Kurtz’s aims and what he’s trying to stop. It’s a balance rarely achieved to such gripping results.

Television needs more film directors, and The Little Drummer Girl proves it. Straight away, we’re plunged into Chan-wook’s thrilling and colourful style. The opening follows a bomb that’s about to go off, and a ubiquitous tick-tocking from various clocks and watches fills the soundtrack – an introduction worthy of Hitchcock.

More than this, Kim Woo-hyung’s elated camera feels alive. As well as a flood of vibrant colours, deep blue being the most common, his visuals love to jump, pan, and excite with every cut – each shot holding another surprise. Good images – composed beautifully, edited with excitement – are like perfectly crafted sentences, and The Little Drummer Girl attacks with full paragraphs.

Episode one of The Little Drummer Girl is one of this year’s best pilots broadcast on any format, live or streaming. If this standard is held, this Night Manager follow up could be the best show of 2018. Episode two arrives next Sunday, so we’ll be biting our nails until then.