The premise is an assumption layered with pebbles of truth. On the one hand, it’s a biopic about the now-respected palaeontologist Mary Anning, who gathered and sold seashells from the seashore of Lyme Regis. On the other, Lee reads between the lines of an intimate friendship between her and the married gentlewoman Charlotte Murchison.

Lee’s speculation is the subject of some controversy, as one of Anning’s descendants contests the fossil-hunter's lesbianism. But as far as the film's concerned, it hardly matters whether the story's real or not. Lee is more focused on showing the class divisions, the hushed female sexualities, and the patriarchal suppressions of the time. 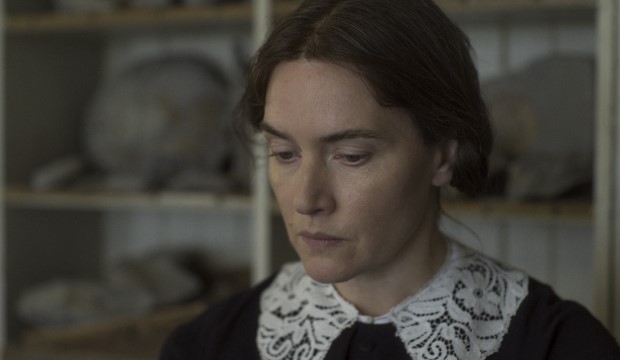 Anning is portrayed by Kate Winslet who, despite fossicking around in mud and rocks and shells, can’t escape those innate Hollywood looks. But her performance is still utterly convincing, wearing a frown like a face mask. Anning is unsociable, avoiding all the poised aristocrats in the cobbled street leading to her shop. She treats everybody, no matter what gender, with an enjoyably stern and impolite manner. She’s a bleak beacon for introverts everywhere.

Cue Saoirse Ronan as Charlotte. Ronan’s been typecast as a lead in period dramas, literary adaptations, or both together. Her casting here is obvious and probably inevitable. Despite barely speaking and wearing mostly black, Charlotte is an extrovert imprisoned by her husband’s preferences. In a restaurant, he picks the quiet spot when she’d clearly prefer the more musical section. She wants sex but he doesn’t want a baby, as if that’s the only reason for her desires.

Charlotte's been diagnosed with ‘melancholia’, the pre-20th century equivalent of depression, which her husband attempts to assuage by going away for five or six weeks. He thinks Mary can nurse Charlotte back to health, working as a kind of assistant on the beach. He turns out to be right. 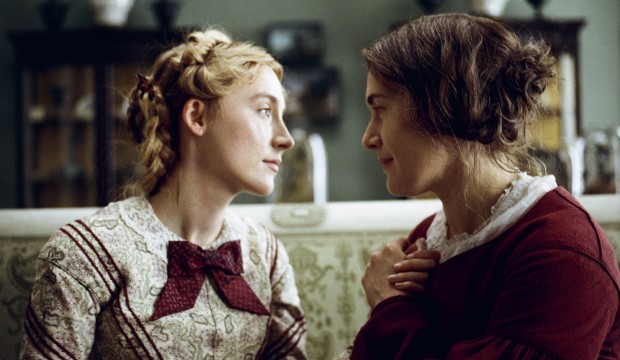 After the initial seduction and first kiss, preceded by firm hand-holding and amorous staring, the romance never rises beyond the sex. In their times alone, their conversations haven't much depth or emotional strength – Lee turning to wordlessly visual expressions instead. It’s nice to watch Charlotte praise Mary’s work, since her fossils were sold off to men who stamped their names in place of hers. But there’s no substantial heart-to-heart, and barely a word about Charlotte’s history.

Ammonite is a mundanely beautiful film to look at. Grey skies and stiff winds overwhelm the sound and colour. The strangely overcast atmosphere ripples through the characters' moods. But this feels less like a love story, and more like a fond memory in Lyme Regis.

Reviewed at the London Film Festival 2020. Ammonite is now in cinemas and available to watch on digital platforms.