2 CW readers are interested
The Mauritanian, Amazon Prime review 4 The Mauritanian, Amazon Prime review Euan Franklin
Bravery in movies is underrated, particularly when it occurs in harrowing and politically motivated stories. Kevin Macdonald’s legal-political drama The Mauritanian examines the barbarous, post-9/11 practices signed off by the US government. Considering the existing scepticism around the film's subject-matter – a tortured prisoner in Guantanamo Bay – there's bravery just in showing how amorally brutal that paranoid, overarching system can be.

The story’s based on the bestselling memoir by Mohamedou Slahi, who spent 14 years in Gitmo, enduring several means of torture, without ever being charged for a crime. Slahi was initially accused of being a key recruiter in the 11 September attacks, connected to Osama bin Laden via a distant cousin. He was taken from his native Mauritania in 2002 and shipped to Cuba.

On the prosecutorial side is a miscast Benedict Cumberbatch as the very American Lt Colonel Stuart Couch, who's determined that Slahi receive the death penalty. Although Stuart has the intelligence and moral meticulousness of a role Cumberbatch usually plays, it’s a strangely submissive choice for him. Nevertheless, he crafts an interesting and attractive performance.

The Mauritanian grows into a classic Us vs Them situation, but with a curious ambiguity for those unaware of Slahi’s story: is he guilty or not? 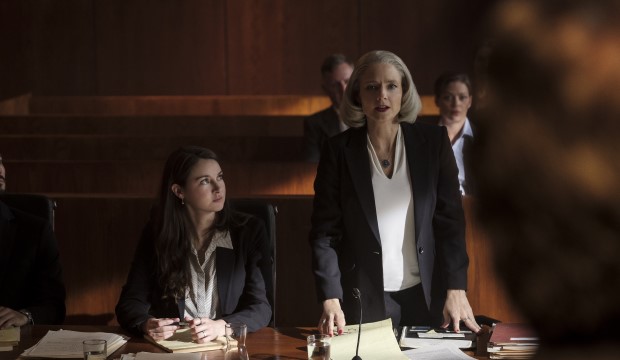 It’s jarring, after The Serpent, to see Tahar Rahim out of the big glasses and 70s hairstyle that made him so vivid as Charles Sobhraj. But despite sharing Sobhraj’s multilingualism, Mohamedou is completely different. He has a laugh and jokes around, despite the sordid circumstances to which he’s hand- and foot-cuffed.

Once Nancy and Teri visit Mohamedou in Cuba and receive his diary, the visuals narrow to a tight frame for his traumatic flashbacks. Like Scott Z Burns' equally critical film The Report, Macdonald steps away from the office-based investigations – stacked with boxes and papers – and dives into more abhorrent territory.

You creep into Mohamedou’s restricted yet optimistic mindset, before being thrown into an upsetting sequence revealing the true horrors waiting inside Guantanamo. You experience his pain and delirium and fractured perceptions. These are difficult scenes to sit through, but necessary to gain at least some comprehension of his suffering.

There are a few unanswered questions and missing parts. For instance, the film only grazes Slahi’s unlikely friendship with the young guard Steve Rose, covered in the brilliant documentary short My Brother’s Keeper. But The Mauritanian is still a harshly illuminating indictment of these violent systemic practices. Although the compensation for Slahi can never be enough, the film at least draws attention to his struggle.