In BBC Two's The Name of the Rose, John Turturro stars as Guglielmo da Baskerville, a 14th-century Franciscan friar who investigates a series of murders in an isolated monastery

The Name of the Rose, BBC Two review 3 The Name of the Rose, BBC Two review Euan Franklin
In the months leading to the conclusion of Game of Thrones, many networks and streaming services have made their own mediaeval attempts to capitalise on its absence – while never really succeeding. Netflix introduced two big-budget films with royal titles over the last 12 months: Outlaw King and (simply) The King. Both delve into real events in mediaeval history, and both exist as tedious copycats of the famous fantasy series.

The start of the new TV adaptation of Umberto Eco's The Name of the Rose threatens the same fate, but wields an intriguing twist. In this case, the battles and swords and armour weave around a murder-mystery tale in a 14th-century Italian monastery. A whodunnit involving monks with quite distinguished bald spots? Why not? 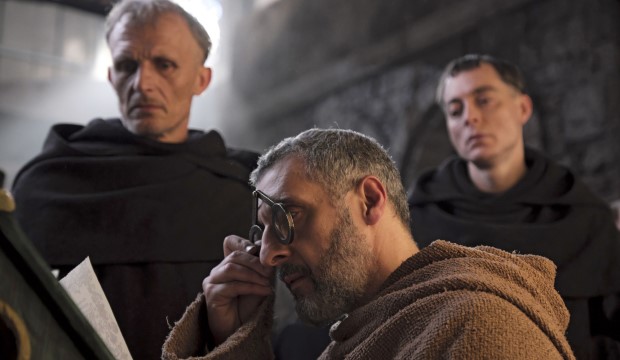 Set in 1327, when Ludwig of Bavaria – the future Holy Roman Emperor – has declared that religion and politics should be separated. But the French Pope John XXII (Baptiste's Tchéky Karyo) doesn’t agree, excommunicating Ludwig and igniting a war between them. In Italy, their armies fight.

The imposing dread of a badly sketched version of Game of Thrones settles quickly. The opening battle is small and strained: resembling more of a historical re-enactment, a play in the mud, than a visually convincing conflict. The series drops into these boring moments a lot, as if to herd in a mainstream crowd.

But as the focus changes to the Franciscan friar Guglielmo da Baskerville (John Turturro) and his young novice Adso (Damian Hardung), the interest levels rise. The two travel to an isolated abbey in northern Italy, which is about to host a debate between Baskerville and John XXII about the current crisis – but they arrive to the discovery of a murdered monk.

Luckily, Baskerville is something of a super-sleuth; he even has his own version of a magnifying glass (a pair of strong lenses). The writing really comes through during these abbey investigations: Baskerville’s enjoyable skills of deductive reasoning and John Turturro’s Holmesian performance combine to form a very watchable hero. Scenes of literal book-making and secret monastery passageways only add to the historical fun.

It’s not long before the drama inevitably returns to the drearily violent context of the time. Rupert Everett plays the Dominican Inquisitor Bernard Gui (loyal to John XXII), who burns apostates and drags naked women behind his horses. Why couldn't the writers stay inside the seclusion, paranoia, and claustrophobia of the abbey? The Name of the Rose has its moments, but it’s a pious struggle to reach them.

The Name of the Rose