Benjamin Britten's opera, with Shakespeare's text adroitly filleted by Britten himself with his partner, the tenor Peter Pears, not only keeps the humour of the original, but heightens it with musical jokes. In this fabulous production from 1995 by Robert Carsen – a really welcome revival – there is physical comedy too. The action plays out on a series of green beds large and small, in Michael Levine's witty and elegant design – the whole natural world is, after all, one great potential bed, as far as the creatures of the forest are concerned.

For the second time in a matter of days, the audience at the Coliseum – where Gilbert and Sullivan's Iolanthe already has everyone in stitches – howled with laughter, as actor Miltos Yerolemou playing Puck, a baffled, spherical homunculus, popped up all over the house and disappeared as abruptly in a series of hilarious stunts. Every comic fruit is picked in this verdant forest, even the boy-fairies more than usually whimsical in their beetle-neat tailcoats. But there is great beauty here too: when these Trinity Boys Choir bugs clamber into a sleeping heap, you marvel and are moved by Carsen's observations of Nature, protecting its own.

Britten cuts straight to the chase, skips the Athens opening and goes directly into the woods. Oberon and Tytania have quarrelled over custody of an infant, and hell hath no fury like a king of the fairies scorned: Tytania must fall in love with some foul thing – cue Bottom the Weaver, one of a clutch of tradesmen rehearsing a deliciously unsuitable play. And two couples from Athens, one happy, one not, who have cantered into the glade, their mismatching to be worsened, then refettled, by Oberon.

As Tytania, soprano Soraya Mafi is not only queen of the fairies but queen of the show: this is a ravishing performance, gloriously sung and delectably acted. Mafi is one to follow, at every opportunity. She is scheduled to appear with Grange Park Opera, and there are sure to be further ENO appearances. Hurrah. Her Oberon, the counter-tenor Christopher Ainslie, has aloofness in demeanour and tone, and there are smashing performances all round from ENO courtiers. The diction – did ever the words matter more? – is for the most part impeccable. 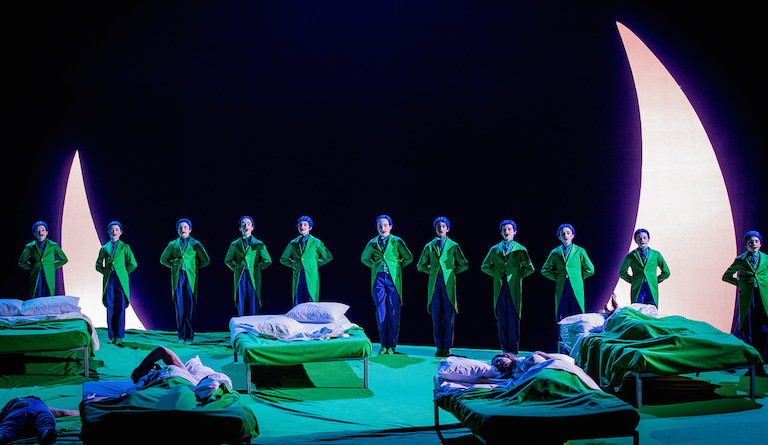 Joshua Bloom brings an unusual matinee idol urbanity to Bottom, and of the lovers there is particularly attractive work from soprano Eleanor Dennis: look out for her at Opera Holland Park's Così Fan Tutte in June, when she sings Fiordiligi.

Like other mould-breaking works – A Midsummer Night's Dream made musical history in 1960 with its shifting soundworld and use of the counter-tenor voice – the opera can sound comfortingly familiar today to those who love it. But conductor Alexander Soddy draws from the orchestra of English National Opera a garland of unexpected colours, cultivating every bud of mystery in the score.

This joyous, affectionate, intelligent production is an absolute must-see, whether you are an established Britten fan or new to this piece. English National Opera is on a roll. Next stop, a brand new La Traviata. The way things are going at ENO, I can't wait.