Lessons in Love and Violence Review ★★★★★

George Benjamin's latest opera, Lessons in Love and Violence, has had its triumphant premiere at the Royal Opera House

Sung in English, at an intense 100 minutes with no interval, Lessons in Love and Violence plunges you right into the turbulent world of England’s King Edward II, whose all-consuming love for another man, Gaveston, brings about his downfall.

The conflict is established from the very first words exchanged between Edward and his chief military expert, Mortimer. ‘It’s nothing to do with loving a man,’ Mortimer tells the king. ‘It’s love full stop that is poison.’

Love and politics don’t mix – thus the clash between personal and political comes alive. Blinded by love, the king will simply not see that the personal is political; that in his position private is always public.

Benjamin’s score creates a climate of inquietude from the very first notes that rise from the pit, where the Orchestra of the Royal Opera House, in fine form, is conducted by the composer himself.

Complex and multilayered, George Benjamin’s music possesses a lustrous sensuality and an uncanny ability to wrap itself around you like a second skin. Throughout it retains the ability to surprise you, with unexpected phrases of crystalline clarity for a single instrument occasionally arising from the orchestral bed. For this particular work, Benjamin has enlisted the sound of less familiar instruments, such as the metallic clang of the Hungarian cimbalom, or the eerie beats of West African talking drums. His harps, too, are required to produce not ethereal cascades, but lower, more ominous plucked notes.

What Benjamin’s music never does is muffle the text. Every word of Martin Crimp’s extraordinary text reaches our ears with searing clarity, making the surtitles rather redundant. The prolific playwright Martin Crimp is that rare thing: a man capable of writing an opera text in vernacular, plausible, spoken English.

Though the real Edward II ruled England in the early 14th century, this production transposes the action to the modern day. Vicki Mortimer’s sets make a bedroom a public space, where the constant presence of others – courtiers, ordinary people or Edward’s wife, Isabel, and children – underline the point that in this context the personal is always political.

The set, dominated by a huge, blue-lit tropical fish tank, rotates between scenes so that we look at the action from different points of view; in part 2, following the king’s downfall, the fish tank is empty, dark, desolate.

Totally attuned to Benjamin’s musical language, the entire cast give breathtaking interpretations. As the king, the French baritone Stéphane Degout, possesses a warm timbre that navigates the challenging tessitura of his role with profoundly affecting ease. The Hungarian-Romanian baritone Gyula Orendt is a fitting Gaveston: mysterious, equivocal, reckless. 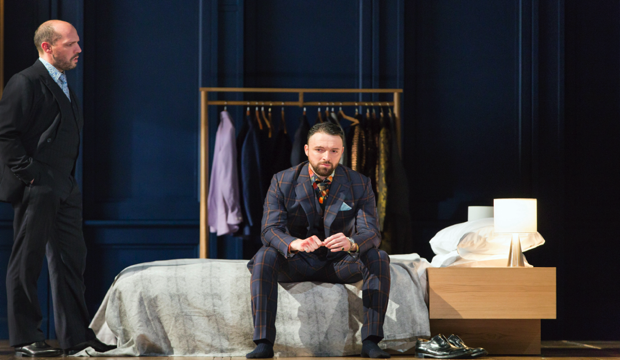 Mortimer, the man who would usurp the King and turn love into tyranny, is sung with suitable perfidy by the British tenor Peter Hoare, overcoming a slightly nervy start quickly to acquire full command of his role.

The Canadian soprano Barbara Hannigan, last seen at Covent Garden in Benjamin’s previous opera, the international hit Written on Skin, is in luscious voice as Isabel, the spurned wife who plots with Mortimer to overthrow Edward and place her young son on the throne.

And the young British tenor Samuel Boden is the son, later to become the Young King, who subverts Mortimer’s plot and reestablishes order of sorts.

Katie Mitchell’s direction (she, too, a Benjamin veteran, having directed Written on Skin to great acclaim) is all you’d expect – assured, intelligent, and showing full understanding of the intentions of composer and writer.

Lessons in Love and Violence is probably THE operatic event of this season. It should not be missed.