World premiere of a tale of love, jealousy and murder – with real skating!

The displaced people have congregated at their journey's end – in a coastal resort near Barcelona. But they are bad for tourism, thinks the mayor: her re-election is in sight and with it, a seat in the Catalan government. She leans on her head of social services, Enric; he, dismayed to find the woman he loves is sleeping with a handsome hunk, takes it out on the vulnerable.

The young woman, Nuria, has an exceptional talent: she is a figure skater at Olympic level, but she has lost her funding. She mourns her inability to train, and Enric finds a way to win her company at last. With money embezzled from the council coffers he builds an ice rink in the basement of a deserted mansion. When an older woman, a former opera singer, aptly named Carmen but down on her luck, is moved on, she stumbles upon the mansion and its secret.

Indignant, overblown Carmen, friend to young addict Caridad, adored by decrepit Rookie whom she rejects, and blackmailer of Enric, is found dead on the ice, and there is no shortage of suspects.... 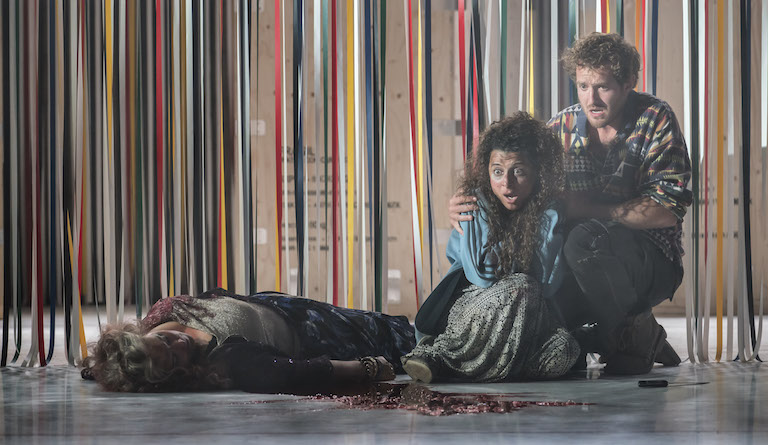 Ah, the ice. In a heatwave, really? Absolutely, yes. And you would have to be made of ice yourself not to marvel at this fabulous mirage, as the ice dancer Alice Poggio traces her entrancing moves on an artificial surface that covers the entire stage at Garsington Opera. The singing Nuria is Australian-born, London-trained soprano Lauren Zolezzi, whose crystal-clear, arcing melodies mirror in sound the graceful architecture of the figures cut on the ice.

It's all done not with frozen water, by the way, but with a special material like that a chopping board. But with the intense sun streaming into the auditorium at Garsington during the first two acts of the world premiere of The Skating Rink, the illusion of being on the Costa Brava was easily carried off.

Beyond the glass walls of the glass house, in the gardens beyond, neat rows of tents represent the camp of the homeless. And three times we see Carmen and Caridad expelled, as Gaspar, Remo and Enric each relate their version of the events running up to Carmen's murder, in true whodunnit fashion. 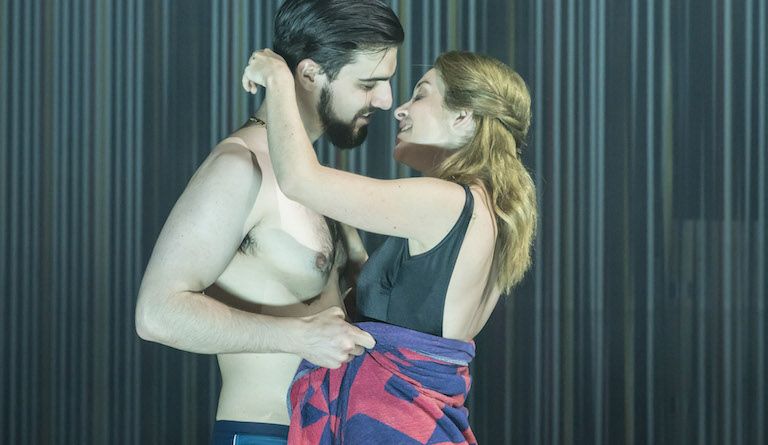 Depicting in music these criss-crossing stories, the desolation of unwanted people, of Enric's unrequited love and of the many-layered community is a score by David Sawer that taps into many genres. For a pre-election beach disco for supporters there is a hilariously mindless dance of the Macarena variety; the Karaoke machine is hi-jacked by a sad figure with a maundering lament. As the story builds, so does the soundworld, from the chilly spareness of strings alone to the full force of Garsington Opera Orchestra, augmented by instruments that echo Spain, including the ukulele-like Chilean charango, and conducted with pace and precision by Garry Walker.

Although Gaspar is, off-duty, a poet ('unpublished...'), and Enric a novelist, the libretto by Rory Mullarkey from the book by Roberto Bolano is not startlingly memorable, but there are some telling and beautiful phrases. 'Two metres by two... that's all the space we take!', say the refugees. The pirouetting Nuria is, to Enric, 'the still point in a spinning world'.

At the heart of this enthralling opera are unfailingly fine performances, especially by Poggio, by tenor Sam Furness as Gaspar and by baritone Grant Doyle, stepping in only a few weeks before opening night, when the original singer was taken ill. Susan Bickley as opera's answer to Grizabella the Glamour Cat is a treat, balanced by Louise Winter's ambitious mayor Pilar, and an almost unrecognisable Alan Oke rasps as Rookie.

Stewart Laing's perceptive design and direction and Sarah Fahie's movement underpin a tale that is both fantastical and grounded. The whole package is terrific, and of enormous credit to Garsington's mission to lay down a new classic for the future. Catch this if you can. If this weather goes on, it is the perfect way to cool off.

The Skating Rink is sung in English with English surtitles. There are performances on 8, 10,14 and 16 July, each with a long dinner interval. Advertised prices include a voluntary development donation of £70. There is a pre-performance talk at 5pm on Sunday 8 July. Trains from Marylebone take about 30 minutes, and Garsington provides a bookable shuttle bus to the opera house.
by Claudia Pritchard