Vanessa review , Glyndebourne Festival Opera 5 Vanessa review , Glyndebourne Festival Opera Claudia Pritchard
A jilted woman in a shrouded house for decades. An ice-cool blonde. A glamorous ball, a pregnant woman, losing the child she is secretly carrying. The opera Vanessa by Samuel Barber with libretto by his partner at home and fellow composer, Gian Carlo Menotti, is chock full of familiar landmarks in music and literature.

Dickens and Chekhov, Janáček and Richard Strauss meet in this lush piece, given its first production at Glyndebourne 60 years after its New York premiere. In a deeply filmic piece, here too are Hitchcock and Bergman.

In Keith Warner's stupendous production, back projections take us outside of the claustrophobic home shared by three women, and occasionally backward in time, or through closed doors. But most of the action takes place in grand rooms stripped of ornament, a house of smoke and mirrors, in mourning for a lost love. In monochrome shades the design by Ashley Martin-Davies is ravishingly lit by Mark Jonathan.

But on this deep winter's night, Vanessa expects her lost lover Anatol, and just when the wait seems fruitless, here is Anatol – except not the original, but his son. Transferring to him her passion, she is unaware that it is with her niece Erika that he spends the night.

This household, at once well-heeled and austere, runs on a tide of domestic staff, and also looking on is Vanessa's sombre mother, the Baroness. But why does she not speak to Vanessa, why does the niece live with them, what exactly happened to the first Anatol? These are only a few of many unanswered questions in this misty and mysterious tale. 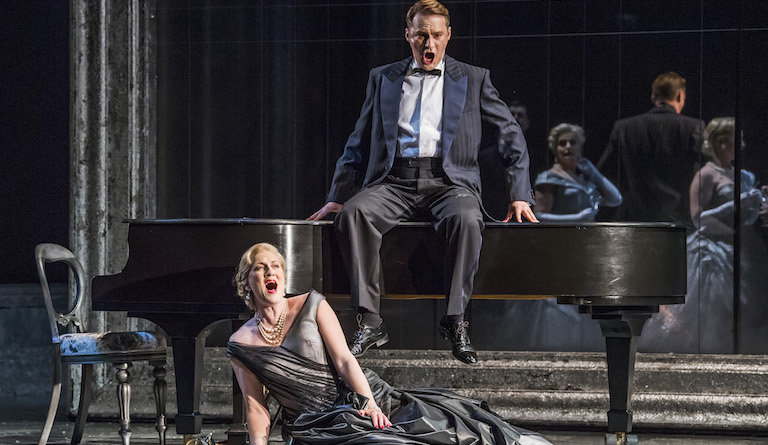 Anatol dazzles both Vanessa and her niece, but is skilfully portrayed as a chancer by tenor Edgaras Montvidas. Photo: Tristram Kenton

Karen Blixen, the author best known for Out of Africa, wrote the original story, and a marvellous piece for female artists it is too. In the title role is British soprano Emma Bell, in a performance of wondrous assurance and complexity distinguished by its easy command of the composer's demanding range.

As Erika, the French mezzo-soprano Virginie Verrez, with the chilly poise of a Hitchcockian heroine, aches at the recollection of one ecstatic night and runs desperate into the darkness at news of the engagement of Vanessa and the young Anatol.

With an eye to the main chance, Anatol is sung with a studied lack of charm by Edgaras Montvidas. There is lovely work from Donnie Ray Albert as the doctor, William Thomas as the Major Domo, and super-trouper mezzo-soprano Rosalind Plowright as the Baroness.

Keith Warner, directing an opera he has admired for years, and Jakub Hrůša, conducting the London Philharmonic Orchestra and Glyndebourne Chorus in all but two performances, sculpt Barber and Menotti's neglected work with precision, taste and insight.

With its thrilling orchestral arrangements and a series of stand-out arias and ensemble numbers in this eye-catching production, Vanessa is sure to be back at Glyndebourne in no time. Tickets are still available for all performances this year, and you can also enjoy the opera to the full via the live cinema relay on 14 August.