TRY CULTURE WHISPER
Receive free tickets & insider tips to unlock the best of London — direct to your inbox
This Jacinta Ardern approach to criminality – name those who suffer, not their abuser – means that in The Women of Whitechapel we get to know five women whose lives sum up the elements of many others. Mary Kelly can read and write, and so can her daughter, who at eight is to be pimped by Maud, a veteran of the doss house the women call home. Polly's marriage has broken down, and she has discovered gin. Catherine and Liz pose for a new invention, pornographic photographs.

The shadow of death lies across these pinched lives – their doss house beds are like coffins – but when kindly, motherly Annie is killed and butchered, the prospect of more attacks looms large. 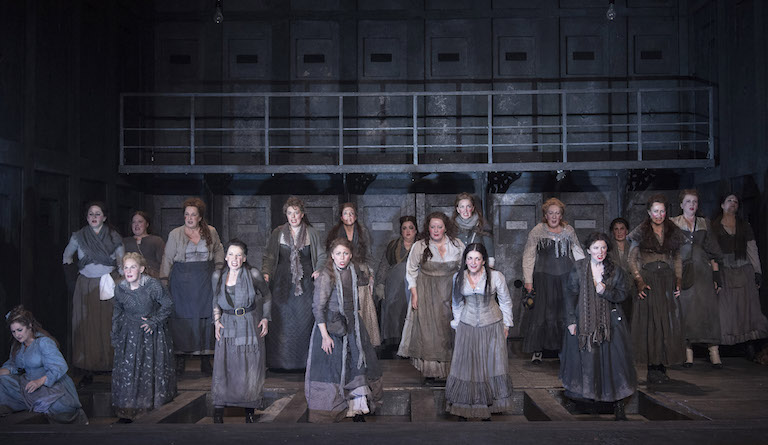 The Women of Whitechapel get by in their doss house. Photo: Alastair Muir

Light and darkness are the twin themes running though the opera with its monochrome and sepia tints, broken only by the faded colours of the five principals' ragged dresses in Soutra Gilmour's evocative design. When chinks of light open up, they feel more like opportunities for voyeurism. The only light that will really help these women, and their successors, is education. Mary's child Magpie, who has a collection of keepsakes in lieu of a family, can read and write. If she follows that route, she will find her way out of the East End backwater known as the Labyrinth.

This grand project was planned by ENO with some of the company's most-loved singers in mind, and in its evolution it acquired the most exciting new soprano in British opera today, Natalya Romaniw, who stepped in to play Mary, and whose passion and breathtaking technique are thrilling. Alongside her are the self-styled ENO Golden Girls: Janis Kelly, scintillating as Polly, Marie McLoughlin tender as Annie, and the frisky double act of Susan Bullock ('God! I love a fireman!) and Lesley Garrett as the photographic models Liz and Catherine. 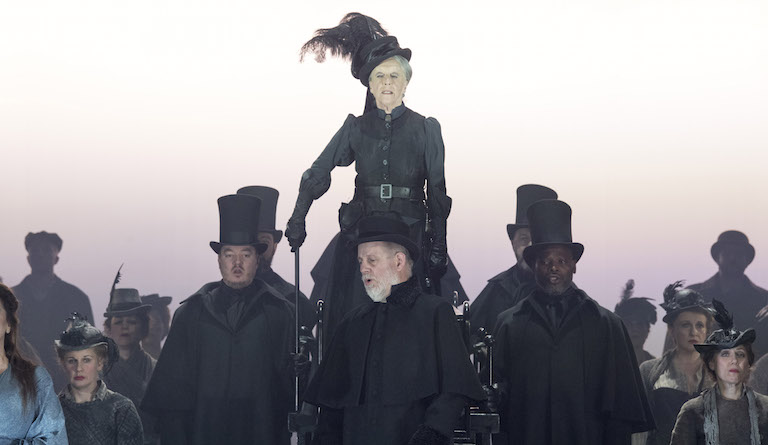 Josephine Barstow, who scored a hit outside opera in Follies, has been the tallest tree in this forest of singing talent for so long that you could cut her voice in half and count the rings (78...). Imperious and theatrical, her Maud is a terrifying surviver.

And what of the men, apart from the killer we shun? Tenor Nicky Spence as Sgt. Johnny Strong is powerful as the police officer overwhelmed by his task. Robert Hayward commands authority (wrongly, as it transpires), as the self-believing Commissioner of Police, who uses his connections with the underclass to supply his unwholesome friends. James Cleverton is the Photographer who snaps autopsies and porn with the same gear. William Morgan represents the journalist WT Stead, as the Writer, observing abject poverty and bringing it to the attention of Queen Victoria. Alan Opie brings gravitas to the Pathologist who, uniquely, regards every human life as equal.

Mary has an admirer, Squibby, who brings scraps to the women. But in the court case that is central to the piece, the mob turn on him and he is blamed for all the ills. This effective demonstration of the ease with which disaffected people pick on a cause chimes loudly with the world outside the Coliseum, and there are echoes of Benjamin Britten in the relentless escalation of hatred. 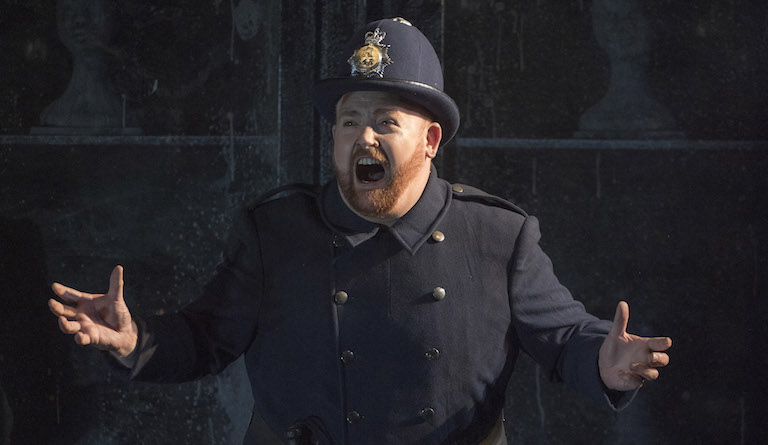 Nicky Spence as the police sergeant despairs at the task before him. Photo: Alastair Muir

Iain Bell's colourful score is full of such references, and the orchestration very fine. An eerie cimbalom rings through the dark streets, high strings represent the chances to escape to the light, and often very spare instrumentation reflects the barebones of the lives on stage. Big choruses and plaintive arias rise and fall, and a grim, fatalistic drinking story manages to steer well clear of 'Oom Pah Pah'; Oliver! casts a long shadow over musical depictions of Victorian poverty....

Emma Jenkins' pacy libretto is packed with memorable lines: the women lament that each is just 'a gin-soaked hole where lust is left to curdle'. All are only ever 'one man away from hunger'. 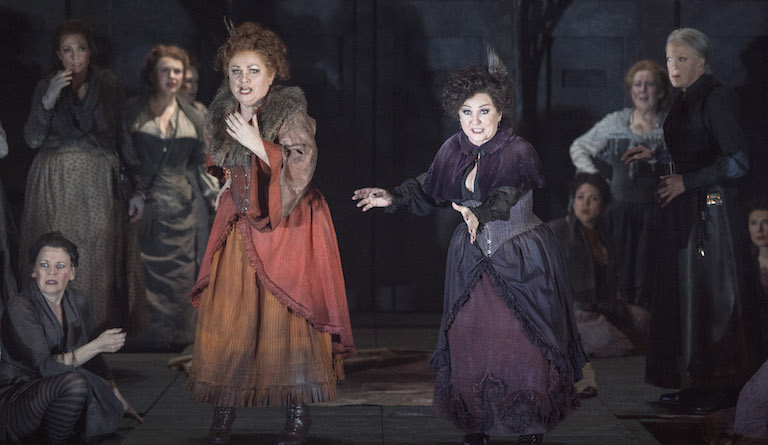 Martyin Brabbins conducts with customary purpose and clarity of vision. Daniel Kramer directs with a light touch, but the piece feels overlong – Act I takes its time, and a long and demanding Act II coda for Romaniw (which she pulls off brilliantly, of course) may be superfluous.

However, this opera already has a life ahead, with performances scheduled outside London and in Germany. Like its ever-resourceful characters, it can bend and adapt, and it certainly should reappear in an ENO season to come. After all, how many other operas are there where the women tell their own story?