But add the solemn texts of the Latin requiem mass and First World War poetry of Wilfred Owen, set by Britten at his finest and performed by a matchless cast, and you are in the presence of something very great indeed.

The composer, a pacifist, wrote this immensely powerful and personal work for performance in 1962 at the new Coventry Cathedral, hopefully and determinedly built alongside what remained of the old, bombed church. The jagged teeth of those ruins grimace above the teeming crowd on stage – men, women and children who depict, families, soldiers, and ghosts of the future.

Turner Prize-winning artist and designer Wolfgang Tillmans, making his operatic debut with ENO, has a gift for imagery beautiful, profound and disturbing. As the episodes of war are played out below, above we glimpse the vicious activities of today's ultra-right-wingers, the shock of the tree branch wrenched to early death in its prime, the hopeful bloom that is as white as the death pallor of a victim of war. 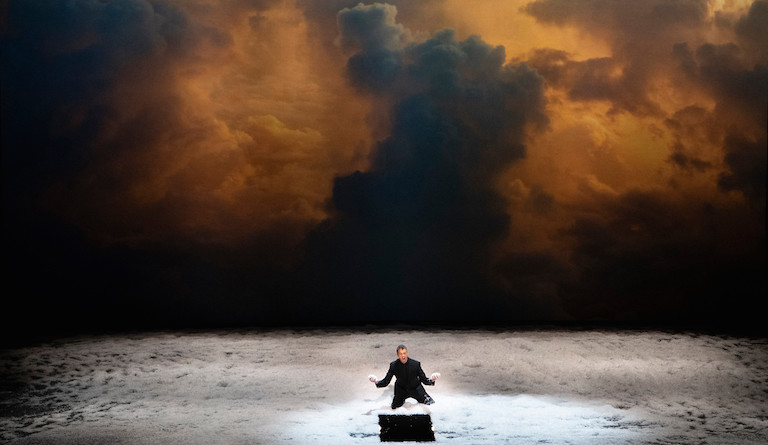 And just three soloists in the throng of 120 or so singers and actors, articulate the many sensations of a people at war, with a continuing sense of individuals being overwhelmed by the merciless machine of ongoing war. Emma Bell represents the women who were left behind to pick up the pieces, their lives changed forever. And the two men, sometimes gung-ho pals, sometimes foes in hell on earth, are portrayed by the pairing from heaven: tenor David Butt Philip and and baritone Roderick Williams.

Alone and together they are perfect interpreters of Britten, the composer of several outstanding operas. Their impeccable diction, warm characterisation, arresting movement and air of helplessness make these performances compelling and unmissable.

Directing is Daniel Kramer, artistic director of ENO for two years. Here at last is the insight, empathy and clarity of vision of which fans, frustrated by his disastrous La Traviata earlier in the year, knew he was capable. Faithful to the original intention of the work, which was a lament for all the losses of war – military, civilian and social – Kramer does this great piece proud, with a team that includes Ann Ye who choreographs superbly, costume designer from the fashion world, Nasir Mazhar, and lighting designer Charles Balfour. 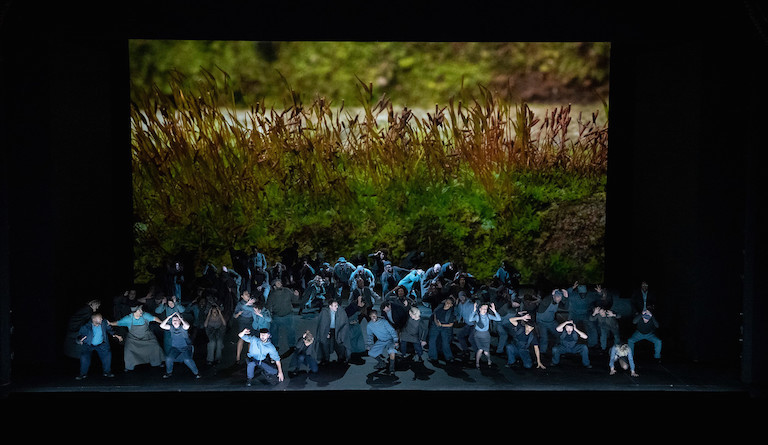 The 120-strong chorus is dwarfed by the powerful imagery of Wolfgang Tillmans. Photo: Richard Hubert Smith

Martyn Brabbins conducting the huge forces – the Orchestra of English National Opera spills over into the auditorium – makes of this gigantic undertaking something of complete musical integrity. Often, but for the spectacle around, you could believe yourself to be at an intimate, chamber event, so confidential and focused is much of the music-making between bouts of furious warmongering.

Above all, this tremendous staging of War Requiem is not a museum piece, locked in 1914-18, 1939-45, nor even the attempted reconciliation in music of 1962: at the first Coventry performance it was intended that the three soloists were German, British and Russian, although Russia stopped its singer coming at the last minute. This War Requiem is a masterly work of theatre for today that sounds the loudest possible warning against the folly of falling out with neighbouring countries.

The prospect of a catastrophic separation from our allies for decades hung heavily over this first performance, which ended with the audience stunned into silence. No one in the stage or auditorium could be in any doubt about the piece's new and growing relevance. Anyone who believes isolation is superior to cooperation should be made to see this.

War Requiem is sung in English and Latin with English surtitles. Remaining performances are on 22, 27, and 29 Nov; 4 and 7 Dec
by Claudia Pritchard

Roderick Williams interview: 'Opera is for everyone – we all love stories'
Sign up to CW’s newsletter
By entering my email I agree to the CultureWhisper Privacy Policy (we won`t share data & you can unsubscribe anytime).