But in a new production by Stefan Herheim of this many-layered masterpiece at the Royal Opera House, it is none of these three who dominate the action, but the composer himself. Tchaikovsky is on stage as a character in his own right, directing the players, writing the score as fast as they can sing it, and doubling as the truer suitor of Liza, Prince Yeletsky.

Setting up this device means a slightly heavy-handed preamble to remind us of Tchaikovsky's homosexuality and possible suicide, deliberately drinking impure water during a cholera outbreak. But the tension and apprehension in the audience relaxes tangibly as the pattern evolves, Tchaikovsky weaving in and out of his own drama, life and art blurring and flip-flopping. 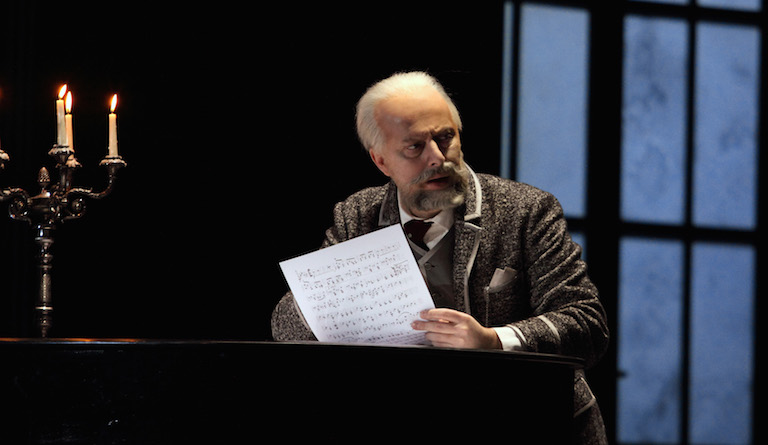 Vladimir Stoyanov as Tchaikovsky/Prince Yeseltsky in 'The Queen of Spades'. Photo: Catherine Ashmore

For this magnificent staging with design by Philipp Fürhofer, we stay in the drawing-room of a grand Russian residence at the end of the composer's own time, the late 19th century, rather than, as originally intended, the court of Catherine the Great. A grand piano serves as musician's workstation, stretcher or dance stage. Walls lurch, mirrors creep and characters appear and disappear through the floor in an ever-shifting world of deceit, delusion, illusion and disillusion.

Visually, there are tricks and treats. For the Act 2 Mozartian pastiche, an 18th-century masked ball and play within a play, the salt-and-pepper suits and bustles are swapped for wigs and paniers. When the chorus intones a church-like prayer offstage, a chandelier becomes a giant censer, billowing smoke; three Saint Sebastian-like martyrs, pierced not by arrows but by the quills with which the composer writes, dance attendance on the stricken Tchaikovsky.

As the composer/Yeseltsky, the magnificent Bulgarian baritone Vladimir Stoyanov is making his Royal Opera debut in style, hardly ever off-stage, engaged with the characters he is 'creating', and topping off this feat with a performance of the prince's Act 2 aria that is musically the best solo work in the show. 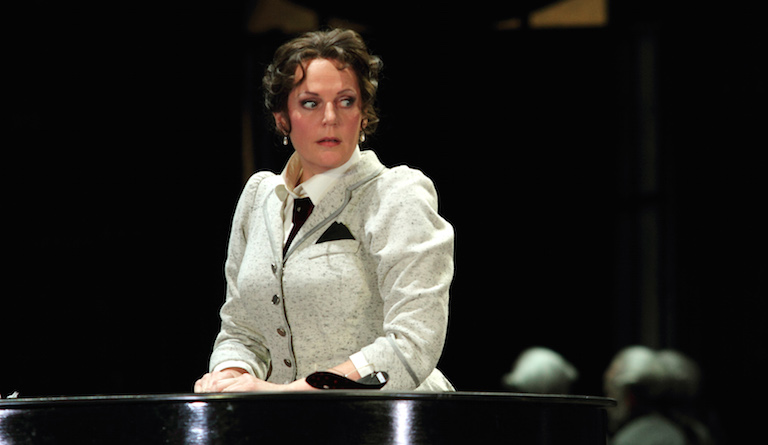 As Gherman and Liza there are two big hitters, Lativan tenor Aleksandrs Antonenko and Dutch soprano Eva-Maria Westbroek. Both had musically chaotic moments on opening night, and Antonenko has not the natural presence of Westbroek. His character is the composer's desire as well as his nemesis; Liza is a caricature of a woman, who demonstrates attraction by taking off her top. Female characters are, on the whole, disappointingly handled, none more so that the Countess, who once had all society at her feet, with mezzo-soprano Felicity Palmer unfairly diminished in a role she has inhabited for years.

A younger mezzo, the Russian Anna Goryachova, who was the first Carmen in Barrie Kosky's marvellous ROH production last year, returns to Covent Garden, equally vivacious, knowing and downright musical as Liza's friend Paulina and as the Papageno-like Mlovzor.

In many ways the stars of the show are the Chorus of the Royal Opera and the Royal Opera House Orchestra, heroes of stage and pit – and, indeed, auditorium, as the arrival of the Tsarina brings singers down the aisles to encourage (not entirely successfully) the house to rise for royalty.

The Royal Opera's music director Antonio Pappano gifts to this magnificent score his characteristically forensic insight, relishing the colours of its great orchestration. And his emotional intelligence brings the music to life with the same intuitive passion he injects into the Italian repertoire for which he is rightly renowned. 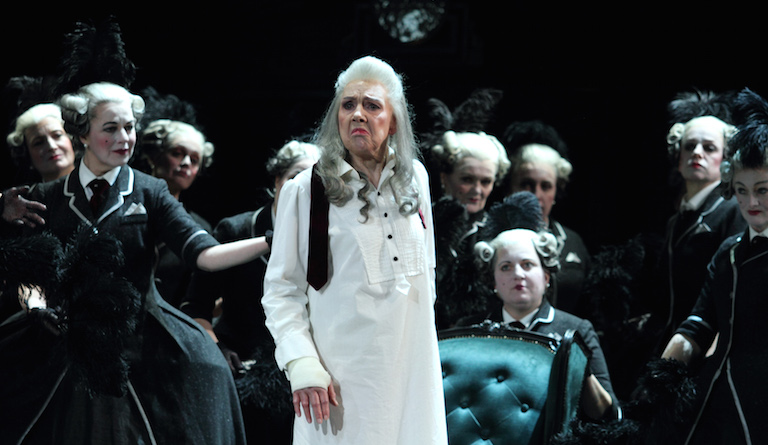 Director Herheim thinks big, and scores more hits than misses with his torrent of ideas. The same creative team was behind the Royal Opera's arresting and Olivier award-winning Les Vêpres Siciliennes in 2013. On the strength of these two productions alone, his is a name to make opera-goers sit up next time round.

Extraordinary to think that Tchaikovsky wrote The Queen of Spades in only six weeks, three years before the death that this production foresees. It was first performed to a rapt audience at the Mariinsky Theatre, St Petersburg, in 1890. The earlier, much-loved Eugene Onegin may be uppermost in most music-lovers' minds when they think of Tchaikovsky's operas. Here is a production of The Queen of Spades that will help them consider it Onegin's equal.

'The Queen of Spades' is sung in Russian with English surtitles. The opera is relayed to cinemas all over London on 22 Jan: click here for more details.
by Claudia Pritchard