The hottest ticket in opera: an all-star cast in the London debut of a tried and tested production of Britten's searing opera, directed by Deborah Warner

3 CW readers are interested
Billy Budd review , Royal Opera House 4 Billy Budd review , Royal Opera House Claudia Pritchard
If you have a head for heights, the topman's station high in the rigging is a great place to be in the 18th-century Navy. Way above the stench and the jostling, in sunlight and not below decks, no wonder the bright new recruit Billy Budd aspires to this challenge in Benjamin Britten's opera of the same name.

TRY CULTURE WHISPER
Receive free tickets & insider tips to unlock the best of London — direct to your inbox
Billy Budd, in its first new production at the Royal Opera House for nearly 20 years, is based on the novella by Herman Melville, and comes with distinguished pedigree: novelist EM Forster was on the team as librettist. In it, young Billy, press-ganged from a merchant ship homeward bound for Bristol, is the darling of the officers and crew until, victim of a deception, he lashes out with deadly consequences, for his unintended victim and himself.

Directed by Deborah Warner, the production has some hard acts to follow, not least the old Covent Garden version and Michael Grandage's matchless Billy Budd for Glyndebourne. Perhaps understandably she has set out on a different tack, with a more or less modern Navy suggested by Chloé Obolensky's costume design, and by taking a step away from historical accuracy in the set design by Michael Levine. 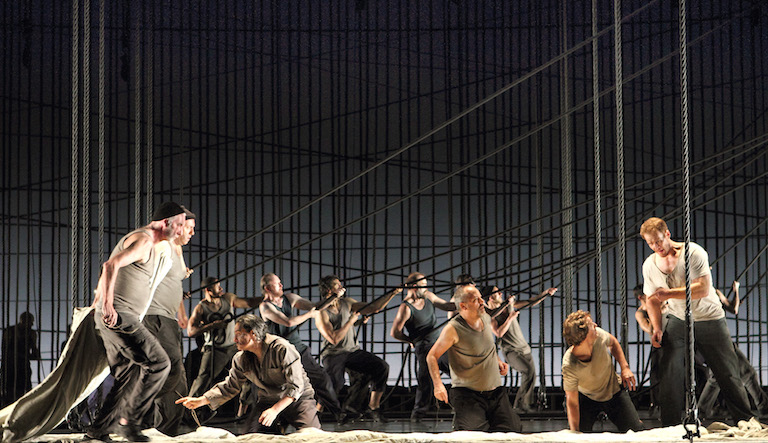 Rather than replicating a ship, the stage has a wall of ropes, that suggest prison bars – for the men are trapped on board and in other ways – and shifting horizontals: decks and spars that slice across the spaces or crush down oppressively. As a web of deception is spun by the complex Master at Arms (a role that does not exist in the modern Navy, but more or less a petty officer), the set too enmeshes all involved in an unfolding story. Jean Kalman's chiaroscuro lighting helps to create claustrophic areas in wide open spaces that Nelson's men could only have dreamed of.

The opera opens and closes with the reverie, many years after the action of the piece, of Captain Vere, the commanding officer of the man-o'-war HMS Indomitable. It was 1797 when Billy came on board, just after the dangerous mutiny in the fleet anchored at the Nore, where the Thames meets the North Sea. Discipline is everything, if another rebellion by pressed men is to be averted. And so Vere must stick to the letter of the law, however cruel that appears. There are clear religious parallels in Billy's trial and Vere's Pontius Pilate-like immovability.

As Billy Budd, baritone Jaques Imbrailo reprises the role with which he made his impressive Glyndebourne debut, and which has become very much his calling card. Nimble, youthful and likeable, his Billy sings with a clear-voiced innocence that thickens movingly with sorrow and experience as his story ends. Respected Vere is sung with power and honesty by Toby Spence, the cultivated captain's admiration for the classics revealed in his gift for telling a compelling story. 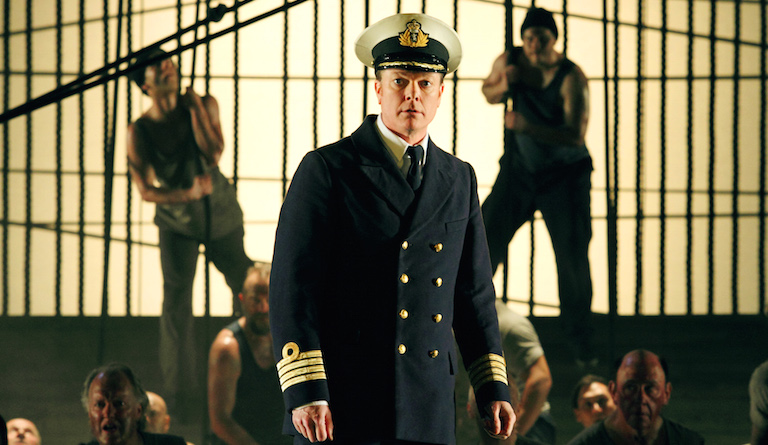 As the jealous, sexually conflicted Master at Arms Claggart, Brindley Sherratt turns in a devastating performance that is by turns meltingly tender – his repressed homosexuality is awakened by attractive Billy – and overpoweringly, destructively vicious, because he cannot afford to give way to his emotions. There is wonderful work, too, from Duncan Rock as easygoing seaman Donald, and from David Soar as sailing master Mr Flint.

Ivor Bolton conducts the Orchestra of the Royal Opera House and the Royal Opera Chorus, the latter augmented by 30 actors, to suggest the close quarters, even in this loose design. The chorus's final surging, rising growl is a truly terrifying. The vast score felt a little baggy on opening night, but the orchestral interludes were compelling,

Last time I was on the warship a senior officer turned to a rating and called her Sharon. The modern Navy is different from the 18th-century Navy. There is no conscription, no all-male crews, we don't execute sailors for manslaughter and we are not at war with France, whatever the fossil Farage says. The comic song 'Don't like the French .... don't like their skippety-hoppety ways' just doesn't work sung in the present day. 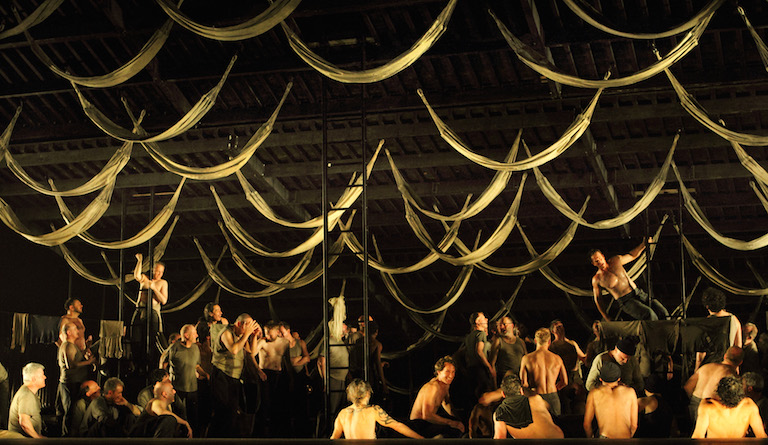 Part of the opera's power is in taking us to another time, from which we have moved on. When we grieve for Billy we do so knowing that had he lived at another era he would not have perished. And it reminds us that more civilised values are not automatic but hard won – and can be lost. A physical gesture that anticipates Billy's startling forgiveness of the captain who sanctions his death undermines one of the libretto's big surprises.

But flaws and imperfections are built into the human condition, as Vere says at the outset. How else would we want to change things for the better? Knock out the weevils and this Billy Budd is a sustaining and enduring thing.

Billy Budd is sung in English with English surtitles. Performances are on 29 April, 7 and 10 May (returns only)