If the offer is too good to be true, it's a con. But when Faust is down on his luck, he falls for such a deal, in Berlioz's timeless opera.

La Damnation de Faust review , Glyndebourne 3 La Damnation de Faust review , Glyndebourne Claudia Pritchard
Bored with his legal studies, the young Goethe hung out in Leipzig's Auerbachs bierkeller, where he dreamed up the moral fable of Faust, a desolate bachelor who sells his soul to the devil in exchange for a more glittering, but ultimately doomed, life.

Auerbachs is the scene of one of the many episodes in La Damnation de Faust, itself one of several musical versions of the legend. This one by Hector Berlioz was first performed at the Opéra Comique in Paris in 1846. Now staged for the first time at Glyndebourne Festival Opera by Richard Jones, it proves to be a curiously downbeat opening to this year's six-opera season.

Teased and tormented, the Faust sung by tenor Allan Clayton is a piteous figure, a gullible booby and easy prey for the seedy, manipulative Méphistophélès of baritone Christopher Purves. This odd couple is a far cry from the sparky duo of Gounod's Faust, seen recently strutting manfully at the Royal Opera House.

Berlioz's Faust, as interpreted by director Richard Jones, doesn't stand a chance as he stumbles from one hopeless situation to the next, redeemed only by the love of Marguerite, who he then betrays. 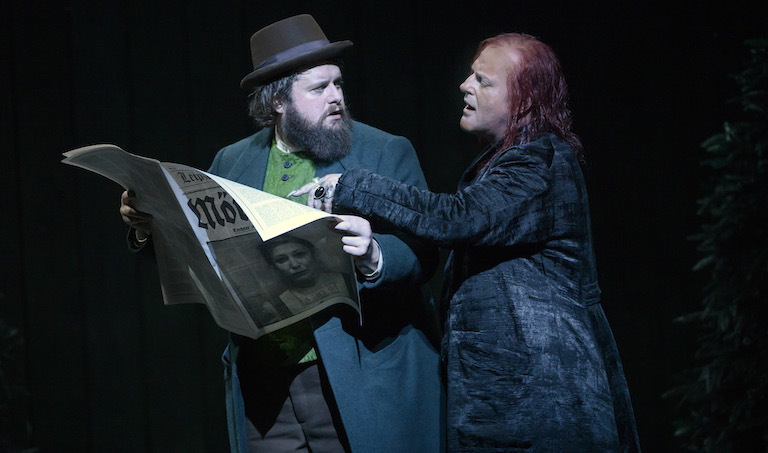 The young man's decline in a series of vignettes is played out in a plain wooden box, observed from galleries above by a devilish chorus, each incident unfolding behind a different door – to Auerbachs, the bookshop, the military academy, the brothel or the teeny-tiny wooden house of Marguerite and her inquisitive mother.

The murky palette of designer Hyemin Shin's set, charmless and strangely soporific, and Nicky Gillibrand's picturebook costumes drain the magic from this fantastical drama, and the demonic antics of the busy dancers fall flat.

It was a grave mistake to dish up a false ending, and then leave it to the doughty Purves to call the audience to order for the Dance of the Will-o'-the-Wisps, plucked from the heart of the piece and tacked on the back like the tail on the donkey. By now, the practised Glyndebourne audience was mentally half way to the car park, and all the Sarah Fahie choreography in the world was not going to bring them back when the road home via Tunbridge Wells beckoned and the bus to the Waterloo train was standing by.

But there is good news. As Marguerite, French-Canadian soprano Julie Boulianne, making her Glyndebourne debut, has a velvety sweetness that contrasts with Purves's gravelly voice of corruption and deliciously sinister spoken French and the gentle vulnerability of Clayton's Faust. And fast-rising bass-baritone Ashley Riches, who made a wonderful Don Giovanni at Opera Holland Park in 2017, makes his Glyndebourne debut as the student Brander, dishing up an unsavoury song at Auerbach's, and reappearing in many guises. 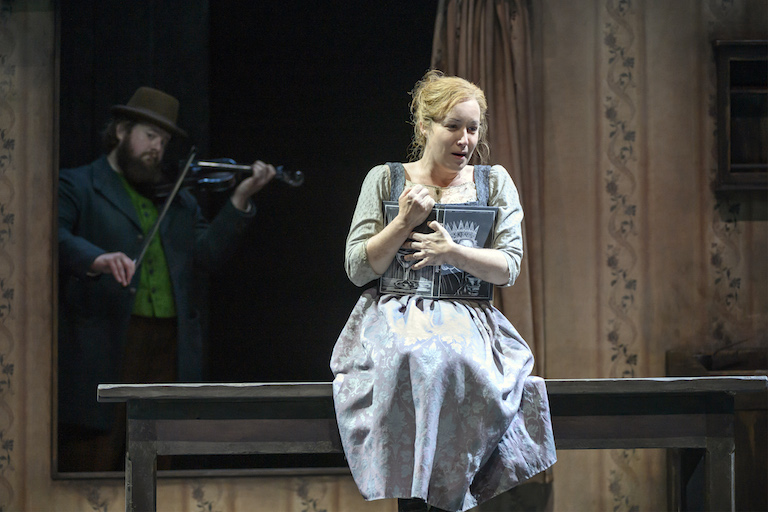 Berlioz thinks big and writes big, so it was disconcerting to find the big orchestral colours as muted as the stage effects with the London Philharmonic Orchestra under Glyndebourne musical director Robin Ticciati somewhat subdued in the pit. This work was originally conceived as a concert piece, and when performed without staging, an idea that came later, the long instrumental passages are in full focus, and not merely background music.

The Chorus comes close to stealing the show, as it often does, augmented by children and actors, but even these great singers are hamstrung, more or less locked to their viewing station.

A disappointing opening to the festival, then, but there are goodies aplenty in store. Look out in particular for the return of Rossini's frolicsome Il Barbiere di Siviglia, Dvorak's heartbreaking Rusalka and a brand new Die Zauberflöte, Mozart very much the life and soul of Glyndebourne. And if the dates don't work for you, catch the cinema relays or Die Zauberflöte at the Proms (27 Aug).