Mozart's magical opera of love, adventure and revenge is set in a grand hotel

TRY CULTURE WHISPER
Receive free tickets & insider tips to unlock the best of London — direct to your inbox
The Queen of the Night inhabits the dark side in Mozart's late, comic opera; her nemesis Sarastro upholds enlightenment. They are poles apart, and their vile and virtuous followers oscillate between the two. So the concept by Canadian directing and design duo Barbe & Douce of setting the opera under one roof, in a Viennese grand hotel, presents immediate difficulties.

Laudably, they explain their desire to tip the balance of power further away from misogyny. This Queen runs the joint. But with Sarastro as her head chef, conducting rituals in the kitchen under a giant hat lit up like a Belisha beacon, the balance of power is loaded one way. Kitchen staff are hard to find, but if one of them abducts your daughter, you give them their cards and the opera closes on page four.

Packing off a hopeful tenor, Tamino, to rescue said daughter, Pamina, isn't such a big mission when all he has to do is pop downstairs. 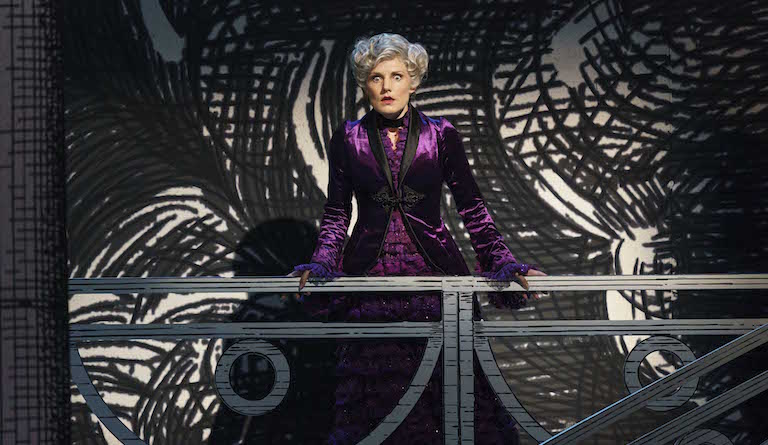 Caroline Wettergreen as the Queen of the Night runs a Viennese hotel. Photo: Bill Cooper

With sets inspired by lavish Edwardian illustrations and their gravura arabesques, sets drop in like toy theatre scenery. Here a palm court, there a conservatory with flesh-eating plants. Costumes are delectable: jaunty checks for the chaps, high necks and swopping skirts for the ladeez, until emancipated Pamina swops her gowns for a practical divided skirt.

Yet half-baked ideas bedevil this production. The famous, women-run Hotel Sacher was a starting point for the directors, but perhaps it was Masonic aprons that inspired the kitchen theme. (Mozart belonged to the secretive brotherhood.) The lure of the Belle Époque, coupled with a balancing of the sexes, prompts the occasional march-past of Suffragettes. But who, setting a production in the 20th century in a Germanic country, thought it would be funny to slap Papageno in the oven?

Gamely putting up with all this hokum, even normally dependable singers seemed understandably ill at ease on first night. Bass Brindley Sherratt as the magisterial Sarastro was never going to win the unequal fight with his absurd bonnet. Caroline Wettergreen as the Sybill Fawlty Queen of the Night was a little insecure until she shot up to the glorious heights of her coloratura range. 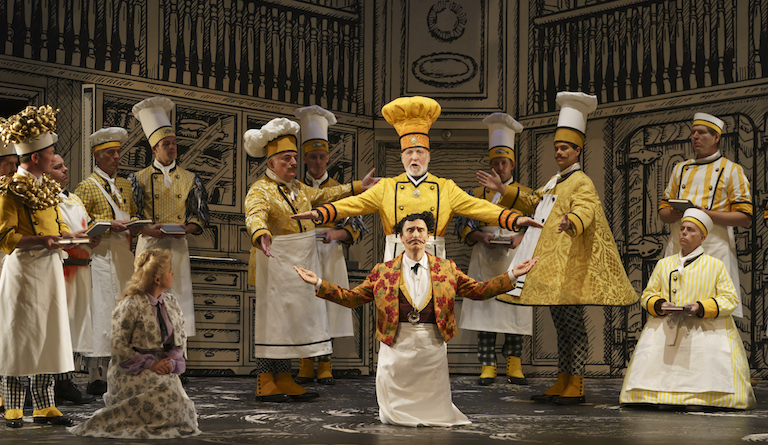 There's a rebellion below stairs, with Brindley Sherratt (in orange hat) in charge. Photo: Bill Cooper

David Portillo's Tamino and Sofia Fomina's Pamina lost their bit of romance to fussy business around them (gratuitous puppetry being another curse on this production) and Michael Kraus's imposing Speaker was half off-stage before his best line. Many exits were clumsy, and yet the luxury of sufficient rehearsal is one of the great prides of Glyndebourne.

Ingeniously, to get round the racism of antipathy to black-faced Monostatos, the devilish character, sung by Jörg Schneider, is a coal porter in the Alfred Doolittle mould.

Maybe there is safely in numbers when directors are let loose on an opera with no thought for the music. The Three Boys rose to the occasion as perky bellhops, and the First, Second and Third Ladies – the Destiny's Child of opera – were as welcome as a complimentary mini-bar. Three cheers for Esther Dierkes, Marta Fontanals-Simmons and Katharina Magiera. 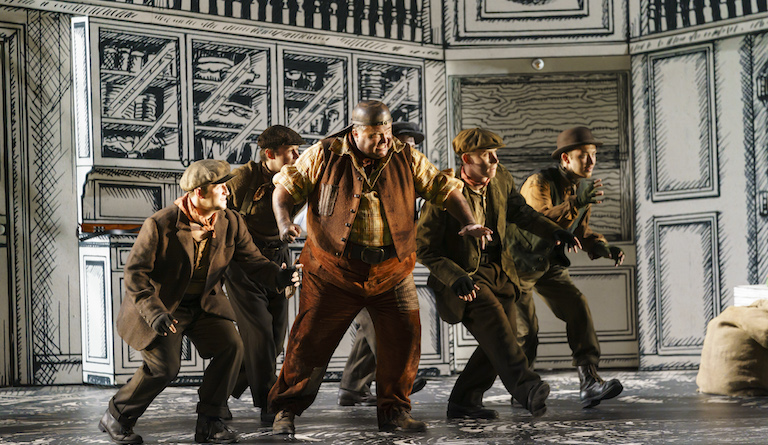 Jörg Schneider (centre) as Monostatos, up to no good. Photo: Bill Cooper

Ryan Wigglesworth conducting the Orchestra of the Age of Enlightenment and dependable Glyndebourne Chorus drew an arid sound at the outset, but the music bloomed in the hothouse, occasionally impaled on directorial interferences, such as reducing the solemn testing of the couple's love to a couple of chores in the kitchen.

We need to talk about puppets, here courtesy of Patrick Martel. Marionettes, beasts on sticks, black-light moving objects, phantom dancers... they all pop up here, often distractingly, in the big numbers where Mozart really needs no help. At their best, such illusions are magical. But a pillow on a pole is not a bird, however much you waggle it, and so bird-catcher Papageno, manfully sung by Björn Bürger, makes no sense. Where puppetry might have scored, with the enchantment of the animals, we get a rather nasty pig (I think), destined for the chopping board.

For entrancing puppetry that tells a story rather than cutting across it, watch out for Phelim McDermott's Tao of Glass, currently at Manchester International Festival, and destined to have a life beyond.

In the meantime, whatever its intentions, this Zauberflöte is not so much Grand Budapest Hotel as Bake Off, but If you like the kitchen sink thrown at your opera, this is for you.

'Die Zauberflöte' is sung in German with English surtitles. The performance on 4 August will be relayed to cinemas across London and nationwide: click here for details
by Claudia Pritchard 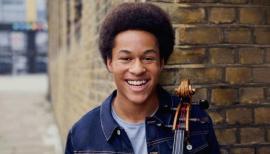