TRY CULTURE WHISPER
Receive free tickets & insider tips to unlock the best of London — direct to your inbox
So there was a tangible sense of high expectation at Covent Garden on first night, and when Kaufmann made his first entrance – through high windows into a country house dining room – he looked so dashing it was almost comical. But the overture's doom-laden three chords, destiny knocking at the door, set the tone: this story won't end well.

Kaufmann plays Don Alvaro, who plans to elope with Leonora (Netrebko); her father, the Marquis of Calatrava (magisterial Robert Lloyd), disapproves of the match. When they are discovered, the Marquis is accidentally shot as Alvaro throws down his weapon. Leonora's brother Don Carlo swears revenge. But when the two men meet many years later, they have assumed false names and do not recognise each other. 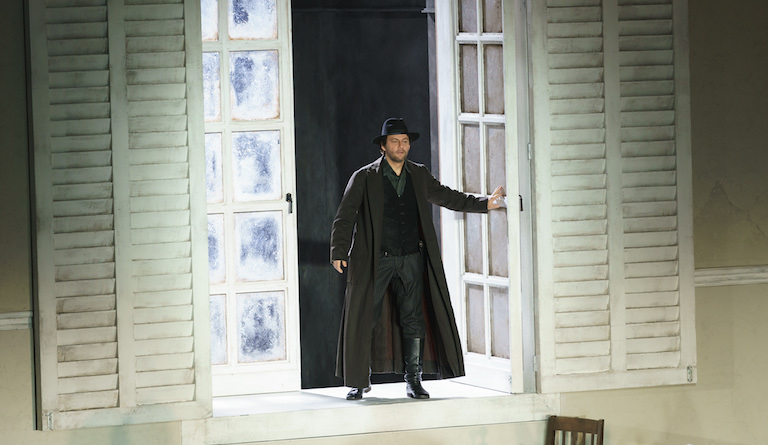 What follows is a bromance that is at the heart of the opera, in the place where you expect the initial romance to be, for the structure of this sprawling piece is almond-shaped: Alvaro and Leonora start together and finish together, but for most of the opera they are far apart. If this disappointed any of those who had paid four-figure sums to see this particular curtain go up, they were not showing it when the rapturous calls erupted four hours later.

In their rare moments together, Kaufmann and Netrebko are a satisfying match, but it is in their solo work that you could hear a pin drop. Superstar Kaufmann is not the same tenor who first dazzled audiences far beyond the opera world; his widely reported illness, break from singing, and the passing years have seen to that. But he is a singer whose sense of phrasing and musical direction is so strong that occasional weaknesses on the way are nothing.

Any fool singer can turn the volume up, but he can turn it down; and if there is a dryness in the once lush top, it suits a character who is a broken man, far better than any showy-offy blast might. 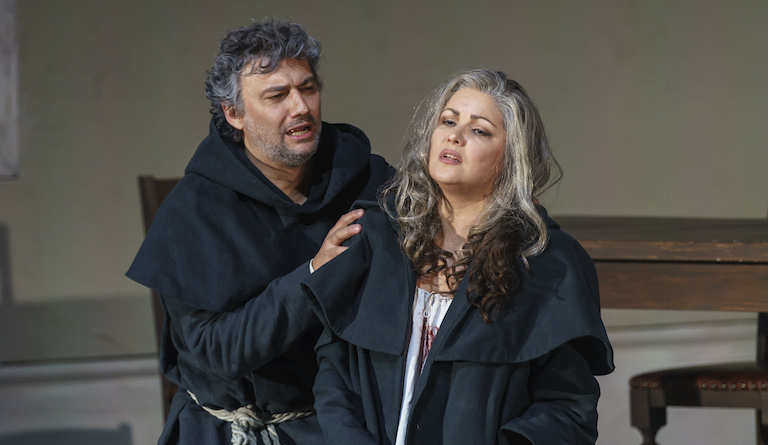 Both Alvaro and Leonora relinquish themselves to lives of seclusion after they lose each other. Netrebko has prayerful arias that are similarly compelling in their intensity, and here the voice is still radiant. Making her role debut – productions of La Forza do not come round that often – she is particularly convincing as the older Leonora, battered literally and metaphorically by time and, without Alvaro at her side, a succession of unimpressive male characters.

Even the priest who protects her, Padre Guardiano, sumptuously sung by Italian baritone Ferruccio Furlanetto, is slow to hold back the less saintly and abusive behaviour when Leonora turns to him. For there are nasty undercurrents in La Forza del Destino, and director Christof Loy portrays the church as self-absorbed, its charity sometimes dished out meagrely, notably by unfunny comedy monk Fra Melitone (Alessandro Corbelli).

There is racism here too, arguably underplayed at a time when such issues are poisoning societies. For Alvaro, it is hissed late on in the piece, is a 'mulatto'. Interestingly, Kaufmann last appeared at the Royal Opera House in the title role of Verdi's Otello. Thankfully, neither then nor now is the role played in blackface. 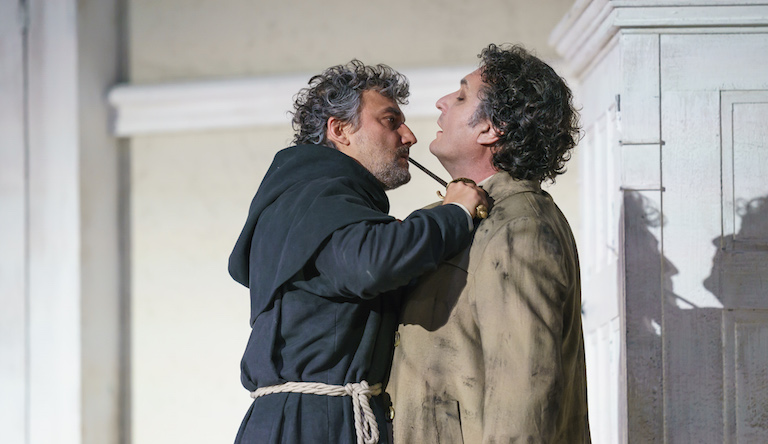 Star billing apart, the treat of the evening musically is the superb pairing of Kaufmann and French baritone Ludovic Tézier as Don Carlo. Well-matched physically, when the tenor goes low and the baritone goes high, they meet in a magical place musically. In tableaux on stage during the action-packed overture, Loy has shown the troubled childhood of Leonora and Carlo, in an attempt to explain why the boy turns into such a poisonous man. That he finds his best friend in his sworn enemy is just another blow in a life of privilege tainted by loss.

Verdi's mighty opera was first performed not in the composer's native Italy, but in St Petersburg, in 1862. With some revisions and re-stagings, including one in London in 1869, it evolved into this, its most commonly seen form at La Scala, Milan, in 1869, with a new ending.

Loy's production was first staged in Amsterdam. Apart for the battlefield, where the bromance starts, the whole action unfolds within the walls of the initial dining room scene, with occasional additions and subtractions. This makes a particular nonsense of the religious scenes, (and by the way, it is pretty much endemic in the monastic life that the brothers learn to put their robes on all by themselves). And the comedy of the soup kitchen will be lost on most in Foodbank Britain. 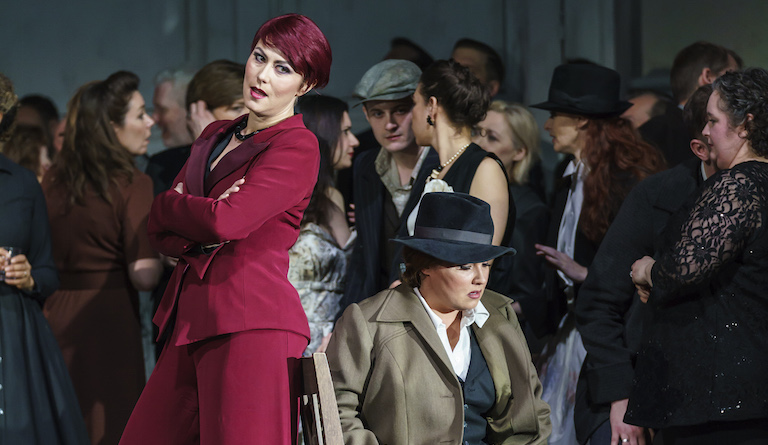 Veronica Simeoni as Preziosilla and Anna Netrebko as Leonora, on the run in disguise. Photo: Bill Cooper

Fidgety choreography is by Otto Pichler, and designer Christian Schmidt's slo-mo video back projections of key moments are superfluous and distracting. Costumes are like a Martini: any time, any place, anywhere. Such diversions are unnecessary: this massive score is packed full of material, and conductor Antonio Pappano is absolutely in his element with an augmented Royal Opera Chorus and Orchestra of the Royal Opera House on top form. The sotto voce tenors and stentorian basses are a particular joy.

Everything here is big, big, big, including the demand for tickets. And yes, La Forza del Destino has been sold out for weeks, but there are always returns. My husband bought a ticket hours before curtain-up. The box office is very patient; just keep trying. For the greatest treasures of the evening, apart from the presence of two of the finest singers in the world, are the singular golden threads that from time to time wind between one singer and a single, solo instrument.

'La Forza del Destino' is sung in Italian with English surtitles. Jonas Kaufmann sings on 24 and 27 March, and 6, 9 and 12 April; Netrebko sings on 24 and 29 March; 2 and 5 April. General booking opens 9AM, Wed 30 Jan. The opera, with Kaufmann and Netrebko singing, is relayed live to cinemas across London, Tues 2 April: click here for more details and booking
by Claudia Pritchard