Wonderfully sung, dazzlingly staged, Donizetti's tragedy is a triumph for English National Opera all over again

Leaning heavily on good books is what composers and their librettists do too. Gaetano Donizetti, a composer so prolific he was once depicted by a cartoonist writing a tragic opera with one hand and a comedy with the other, was like many Italians, enthralled by the rugged romance of Scotland. He set two books by that country's prolific Sir Walter Scott, whose 1819 novel The Bride of Lammermoor inspired Lucia (and half a dozen other operas). But Donizetti's Lucia, first staged in Naples in 1835 with a libretto by Salvadore Cammarano, took on a life of its own.

Lucy Ashton, whose tragic story is based on fact, becomes Lucia, with an Italianised lover, Edgardo, scheming brother, Enrico, and fatuous husband-to-be Arturo, whom she is tricked into marrying, to save the family fortunes. Heaven forbid that Enrico, imbued with record-breaking vileness by American baritone Lester Lynch, should get a job of work when he has a little sister to hawk.

And that little sister is sung by soprano Sarah Tynan in a revelatory performance completely in tune with Alden's vision – that Lucia is scarcely more than a child, not yet in long skirts and toying with dolls, even though she has developed a passion (not unreasonably) for the handsome stranger who rescued her from a rampaging bull. You know how it is. On the cusp of womanhood, Tynan's Lucia has not the mighty heft of some of the divas of the past, but a freshness and innocence that nonetheless makes light work of the great technical demands of, notably, the so-called mad scene. 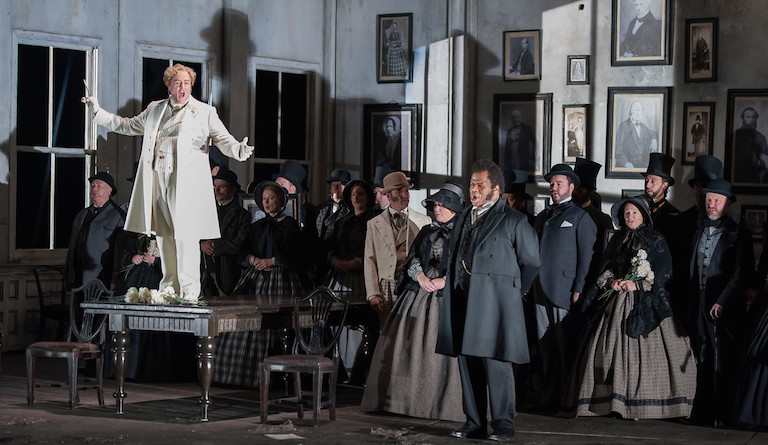 Taking terrible revenge on her wedding night, and unbalanced by all that has befallen her, this famous and solitary musical marathon is accompanied, as in the original score, by glass harmonica, that otherworldly instrument that spins music out of thin air. This spooky rarity haunts the music with the sombreness of the funereal greys of Brigitte Reiffenstuel's crinolines. Stiff-necked ancestors look down from grainy photographs, like all those people who said 'Oh yes we knew...' when a serial sexual predator has been rumbled. Young women are traded, even in an apparently upright society.

Wrestling with the conflict between his faith and his family ties, the chaplain is sung with tormented passion by ENO regular, bass Clive Bayley. And there is wonderfully Italianate bel canto from tenor Eleazar Rodríguez as a genuinely dashing Edgardo. Stuart Stratford conducts the hugely impressive Orchestra and Chorus of English National Opera with brio.

Three operas into this interesting season – Salome and Porgy and Bess (until to 17 Nov) have already made their mark – I wonder whether the newly topical theme of women's shattered lives is going to become wearing. But for now it is an absolute joy to be able to recommend most highly this ENO production.

Whether you are new to opera or bathe in the stuff, here is a wonderful evening, musically, visually and dramatically, a big hit from the heart of the operatic repertoire that will have audiences coming back for more. 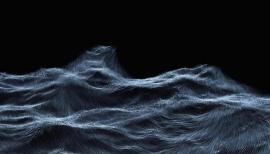 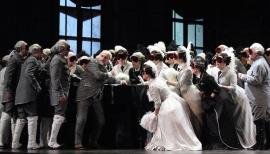