Salome review , English National Opera 4 Salome review , English National Opera Claudia Pritchard
The Dance of the Seven Veils is performed by Salome to her decadent step-father Herod in exchange for any wish. He gets his dance and the veils are cast aside; Salome gets her wish – turning down wealth and jewels, only the head of John the Baptist on a silver platter will suffice.

Salome, raised in a depraved court where cruelty is king, is sexually aroused by the entombed Jakanaan, as the prophet is called here in Richard Strauss's opera Salome, itself based on the play by Oscar Wilde. The holy man (bass David Soar) is currently languishing in Herod's dungeon, wearing a camera permanently trained on his own mouth, from which issue the prophesies destined to be ignored, a modern instrument of torture.

But in this voyeuristic society, Salome has only learned to express herself in the negative terms of those around her. Her teasing dance is deliberately thin, and when the seventh veil is removed it is in the form of the swishing blond pony tail that she sports, in common with most of the female characters – impossibly long hair being the minimum requirement for a woman in Herod's macho court.

This unusual striptease, helped along by disengaged backing dancers, is one of the many devices that Australian director Adena Jacobs and team use to de-objectify Salome. Wilde lays the ground for this (his formidable play predates all the fans, letters and drawing rooms of the later comedies that also take a pop at sexism). He has Salome slaver over Jakanaan's flesh one minute, despise it the next, long before the Daily Mail devised its double standards. 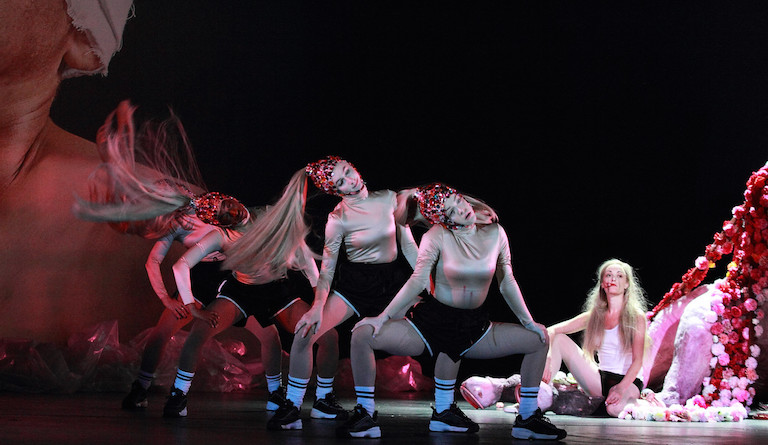 Watching this modern/fancy dress production, which courageously opens English National Opera's woman-focused 2018/19 season, you can never remind yourself too often that this opera, with its bold score and harrowing themes, was written in 1905. No wonder it was chosen by the V&A as one of a handful of operatic landmarks in last year's Opera: Passion, Power and Politics exhibition. It still has the power to shock. How low can a person go, it asks, and wherever you think the depths lie, it goes deeper.

In the title role, the Scottish mezzo-soprano Allison Cook, renowned for her acting as well as her singing skills, is an arresting stage presence, slithering through the action like the entrails that slop on to the stage when an admirer, Narraboth (Stuart Jackson in a really impressive house debut), ends his own life. Tenor Michael Colvin is a leering, writhing Herod and ENO favourite Susan Bickley, fresh from Garsington Opera's 2018 commissionThe Skating Rink, is his wife, Herodias.

Cook's range, musically and dramatically, is wide, although there isn't always the vocal power to match Richard Strauss's powerful and multi-coloured orchestration. Martyn Brabbins conducts the orchestra of English National Opera on top form in music that, like Wilde, looks from the gutter to the stars. 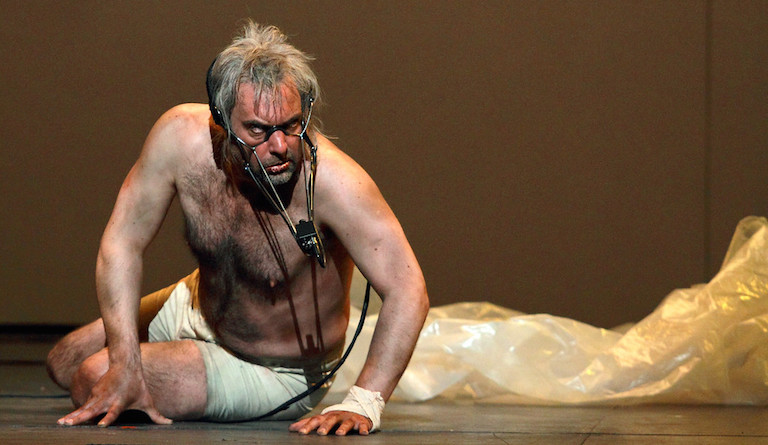 David Soar as Jakanaan is tormented by a camera trained on his own mouth in 'Salome'. Photo: Catherine Ashmore

The production itself favours a single colour: red. The colour of blood and passion, it is also watered down into pink, the My Little Pony references taking on a sinister hue. Beauty and horror are confused throughout: when a decapitated pink horse is hoisted high and sliced open, garlands, not guts, spill to the ground.

This is strong meat, in short, and sounds a warning to any society that cannot distinguish between kindness and hatred, ugliness and virtue. Strauss's own country, Germany, was to fail on this score twice within his lifetime. As other countries lose their moral compass too, this Salome feels well-timed.

Salome is sung in English with English surtitles. Click here for the entire ENO season 2018/19
by Claudia Pritchard

Stuart Skelton interview: 'Wagner is a soap opera with the best soundtrack'
Sign up to CW’s newsletter
By entering my email I agree to the CultureWhisper Privacy Policy (we won`t share data & you can unsubscribe anytime).