Marking the centenary of the end of the First World War, a moving programme of song interpreted by top artists Ian Bostridge (tenor) and Antonio Pappano (piano)

5 Dec: Requiem, The Pity of War, Barbican 5 Dec: Requiem, The Pity of War, Barbican Claudia Pritchard
The 100th anniversary of the end of the First World War will will be marked with a special song recital at the Barbican, London, given by two international stars – the tenor Ian Bostridge and the pianist Sir Antonio Pappano, music director at the Royal Opera. The programme is also to be released on disc.

Entitled Requiem, The Pity of War, the programme spans almost 50 years, from the final decade of the 19th century to the height of World War II. Gustav Mahler and Kurt Weill are joined by two composers of both promise and achievement whose lives were cut short by the Great War, the Englishman George Butterworth (1885-1916) and the German Rudi Stephan (1887-1915).

The concert opens with three songs from Mahler’s folk song-inspired collection Des Knaben Wunderhorn. They are followed by Rudi Stephan’s cycle of six songs, Ich will dir singen ein Hohelied. Composed in 1913-14 in a style that straddles Romanticism and modernism, the songs set sensual poems by Gerda von Robertus (1872-1939). 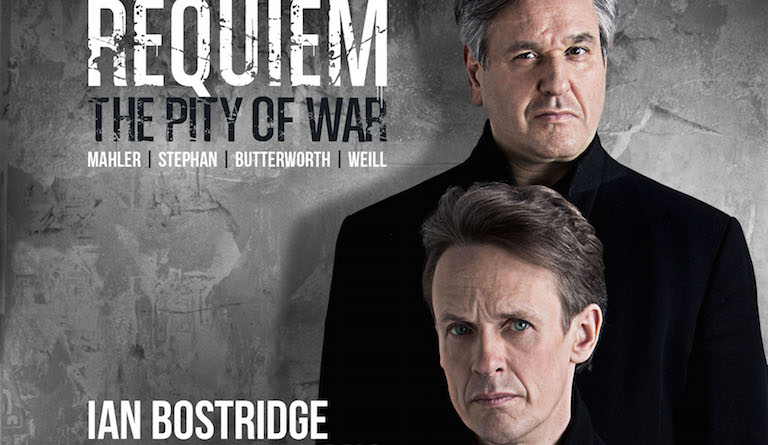 Ian Bostridge and Antonio Pappano release 'Requiem, The Pity of War' as an album on Warner Classics on 26 Oct. It is performed live at the Barbican on 5 Dec

Then come six songs from George Butterworth’s poignant and lyrical collection A Shropshire Lad. He composed them around 1910 to poems by AE Housman, which were written in the shadow of the Second Boer War (1899-1902) and later read by many English soldiers in the trenches.

Kurt Weill’s Four Walt Whitman Songs date from 1942, seven years after the composer had settled in New York as a refugee from Nazi Germany. Whitman wrote the texts during the American Civil War (1861-1865) – the most famous is ‘O Captain! My Captain!’ – and Weill’s music, acknowledging his new home, incorporates elements of blues and Broadway.

“There is a tremendous variety of colour and harmonic approach in these songs,” says Pappano. “It’s amazing how history had a hand in creating and inspiring them. The horror and – as Wilfred Owen said – the pity of war are very much present in these songs, but there is also anger and loss. They are very dramatic and hugely compelling for an audience.”

The end of the all-male concert: Trinity Laban unveils 50:50 programmes
Sign up to CW’s newsletter
By entering my email I agree to the CultureWhisper Privacy Policy (we won`t share data & you can unsubscribe anytime).