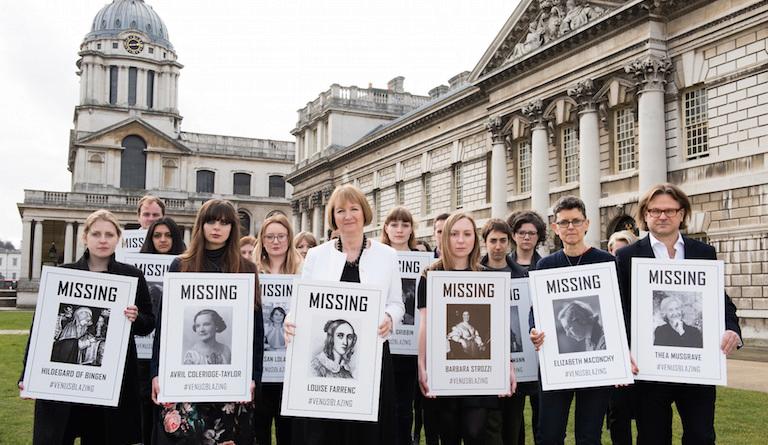 Harriet Harman joins the campaign for more music by women. Photo: Juno Snowdon
Venus Blazing is the name of a campaign by Trinity Laban Conservatoire of Music and Dance, which on International Women's Day makes an unprecedented commitment to the music of women composers. For the next academic year it will virtually abolish events that feature only music by men.

Drawing on centuries of music past and present, Trinity Laban pledges that in 2018/19 at least half of the music in its 60-plus performances, at home on its historic Greenwich campus and across London, will be by women composers.

'Venus Blazing will encourage and inspire its students – many of whom will go on to shape the future of the performing arts – to engage with the historic issue of gender imbalance in music by women, and ensure that it does not continue into the next generation,' says Harman. 'I am greatly looking forward to hearing some of the musical treasures by women I might not otherwise have had the chance to hear in performance.'

Among the performance highlights of Venus Blazing is a new production of Thea Musgrave's opera A Christmas Carol (December 2018), symphonies by Louise Farrenc and Grace Williams performed by the Trinity Laban Symphony Orchestra, an exploration of the music of Trinity Laban alumna Avril Coleridge-Taylor and more to be announced. This will include music by current Trinity Laban composition students and staff, including Soosan Lolavar, Laura Jurd and Deirdre Gribbin, whose Violin Concerto Venus Blazing has given the name to this celebration.

The Trinity initiative comes alongside pledges from several programming bodies, including the BBC Proms, to commission half of new works from women composers.

Dr Sophie Fuller, programme leader of Trinity Laban’s Masters programmes, is author of The Pandora Guide to Women Composers: Britain and the United States. 'It is widely recognised that music created by women – whatever the genre – is heard much less often than music created by men,' she says.

'In past centuries, it was difficult for women to find a meaningful musical education or get equal access to performance opportunities, but there have always been those who leapt over any obstacles placed in their way. We at Trinity Laban want our students and their audiences to hear their often powerful work.'