TRY CULTURE WHISPER
Receive free tickets & insider tips to unlock the best of London — direct to your inbox
In Garsington's recent, magnificent Capriccio, it is the competing claims to supremacy of literature and music that are finally reconciled by being channelled together into a different form: opera itself. In Ariadne Auf Naxos, in a new production at Opera Holland Park, and the company's first such, high-minded opera and knockabout vaudeville bang their heads together, until the performers accept that they can pool their talents.

Opera's equivalent of a backstage musical, Ariadne is packed with opportunities to make fun of showbusiness in all its forms. Antony McDonald's production opens with incompatible artists booked for a rich man's party heading into their caravan dressing rooms – a dinky little number for the diva Prima Donna, a scuzzy camper van for the vaudevillians.

Parked up on the lawns of a Scottish baronial hall (the production is a collaboration with Scottish Opera), the vans shift to the side but never leave the stage, somewhat reducing the magical transformation that can take place between the bickering Prologue and the 'improvised' joint entertainment of Act Two.

McDonald designs this production too (he is about the direct and design Hansel and Gretel at the Royal Opera House), with its witty and romantic costumes and it is beautifully lit by Wolfgang Göbbel. Circus skills imparted by Joe Dieffenbacher add some genuinely entertaining tricks to this sparky display of all the talents – there are even real fireworks, always a winner.

Brad Cohen, music director of Western Australia Opera, conducts the City of London Sinfonia, which conjures Strauss's ethereal, celestial soundworld out of metal and wood. A big supporting cast turn in delightful performances of wit and charm, and actress Eleanor Bron is engaging, if in need of amplification, as the Party Planner, a speaking part. 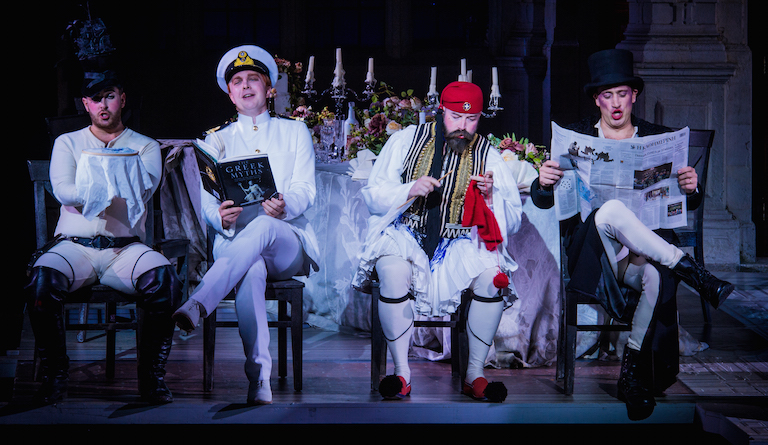 The vaudevillians wait to go on in Ariadne Auf Naxos. Photo: Ali Wright

There is fabulous singing from the principals too: OHP favourite Jennifer France sings Zerbinetta, the coquettish showgirl soars high on a trapeze with top notes to match. No wonder the Composer (normally a 'trouser' role, here played as a woman, by the wonderful Julia Sporsén) is smitten.

Dutch tenor Kor-Jan Dusseljee is a tremendous new voice and presence at OHP as The Tenor and then as Bacchus in the Act Two entertainment; audiences will be hoping to see and hear more of him. American soprano Mardi Byers is a satisfyingly grand Prima Donna, her Ariadne opening out like a gorgeous bloom from OHP's overflowing flowerbeds.

The summer night is like a character in its own right, ever-present and with that hint of heat-stoked madness. If the unfolding relationships feel sometimes undeveloped and the growing creative connection between rival artists unexplored, the evening overall has moments of magic, and who doesn't like to be dazzled once in a while?

'Ariadne Auf Naxos' is sung in English and German with English surtitles. There are further performances on 19, 21, 25 and 27 July
by Claudia Pritchard