A poet and composer compete for supremacy, until they collaborate and produce an opera

1 CW reader is interested
Capriccio review , Garsington Opera 5 Capriccio review , Garsington Opera Claudia Pritchard
On the day that Richard Strauss finished his last opera, Capriccio, thousands of Jews were killed in Romania, Latvia and Ukraine. On the day of its premiere in Munich, 28 October 1942, the first convoy of Jews arrived at Auschwitz-Birkenau from Theresienstadt. Hardly the backdrop, it would seem, for a playful opera about flirtation, clever conversation, and cultural pleasures.

But in adhering to his plan to write, at a time of barbarism, an opera both making fun of and celebrating the high arts, he was protesting against the crude values of the Nazis. He was also demonstrably using his talents to create a beautiful object and not to glorify, as the regime would have preferred, a grotesque chimera.

At Garsington Opera, an exquisitely staged and sung production of this knowing and many-layered masterpiece moves the action from the quizzical 18th century, in which Strauss's initial collaborator, the Austrian writer Stefan Zweig, had set his story, to the 1940s of the first performance. 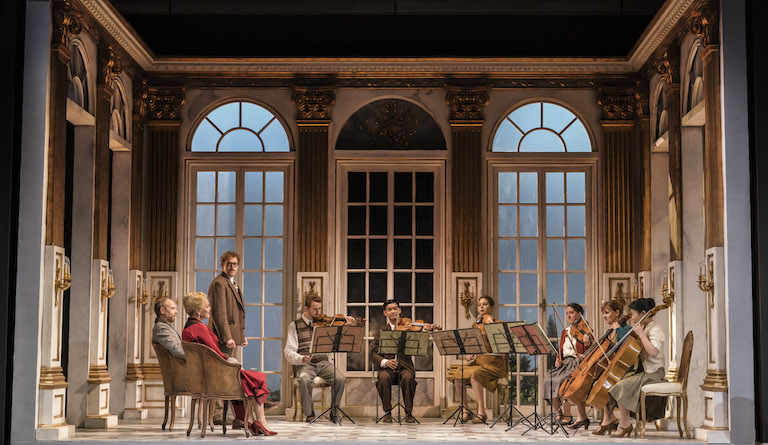 The cultivated Countess Madeleine and her affable commitmentphobe brother entertain a poet, composer, theatre director and sundry arty folk. An intellectual game – which is the greater art form, literature or music? – evolves into a compromise solution: let's make an opera. But how will it end, muses the Countess. Which of her two suitors will she, as the central character, choose? A respectful little bow to a possibly ancestral portrait of a young woman playing a Baroque guitar may give us a clue. Or is she bidding the musician farewell?

As the Countess, Garsington has secured a star turn in Swedish soprano Miah Persson, making her house debut. Commanding, graceful and luminous of tone throughout, her final, extended, solitary scene is so lusciously sung, the audience seemed as one to hold its breadth. Persson spun across the orchestra a silver thread of sound as fine as an intricate web between the flowers in the cottage garden outside. And this feat was all the more remarkable for the unannounced fact that, indisposed during final rehearsals, she was during the first night performance singing with the Garsington Opera Orchestra for the very first time.

She heads a cast of well-defined characters, each one sung by a singer who really understands what they are about, from the insouciant Count, a droll William Dazeley, to the household's reliable Major-Domo, Benjamin Bevan. The scene in which eight staff, delighted to have the château to themselves, mirror the earlier frenzied debates of the Countess's set, is hilariously and skilfully sung by young artists deserving of the good careers ahead of them. 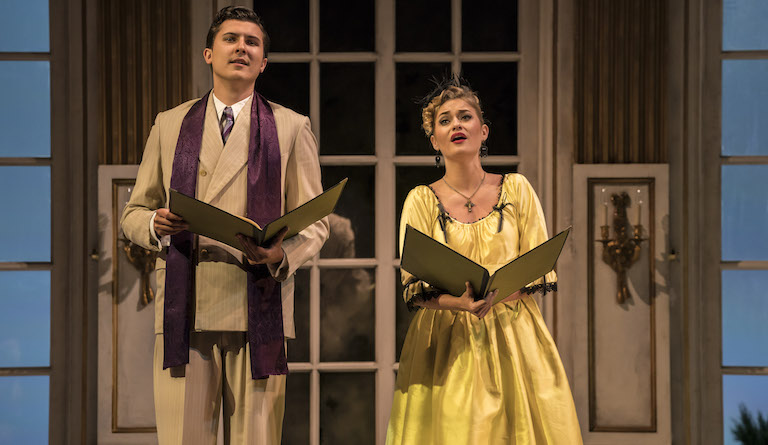 Andrew Shore, who had audiences in stitches as the Lord Chancellor in English National Opera's Iolanthe, plays the theatre director La Roche, who adheres doggedly to crowd-pleasing spectacle in his shows. The passion with which he and all around first debate, then intemperately argue at full throttle is one that opera-lovers will recognise. Highly charged and amusing performances come, too, from the British tenor Sam Furness as the composer Flamand and Irish baritone Gavan Ring as poet Olivier. Hanna Hipp is sultry and creamy-voiced as the actress diva Clairon.

Douglas Boyd conducts this translucent, ornate score with dedication and affection, and the production is wittily directed by Tim Albery, whose Idomeneo at Garsington in 2016 was similarly outstanding. As then, design is by the brilliant German-born Tobias Hoheisel, whose sumptuous 18th-century interiors are cut with 1940s additions, a Patrick Heron-like abstract giving way to that lady with her guitar. Persson presides over this elegant home like a Hitchcock heroine, glamorous in a luxurious, sculptural crimson day gown and romantic evening wear.

This stylish co-production with Santa Fe Opera, Garsington's first such international venture, is a delicious evening of cultural chat and happy endings. When first produced in 1942, the two-and-a-half hour piece ran straight through. Garsington audiences are allowed a more comfortable evening, with an 85-minute picnic or dinner interval. This is world class singing in civilised surroundings, that demonstrate Strauss's cultivated values.

'Capriccio' is sung in German with English supertitles. There are eight performances, each with a long dinner interval. There is a pre-performance talk at 4.30pm on Sunday 3 June. Trains from Marylebone take about 30 minutes, and Garsington provides a bookable shuttle bus between High Wycombe station and the opera house, and back again.
by Claudia Pritchard

Lauren Fagan interview: 'I always wanted to be on the stage'
Sign up to CW’s newsletter
By entering my email I agree to the CultureWhisper Privacy Policy (we won`t share data & you can unsubscribe anytime).
1