English Touring Opera chooses London to launch its national tour of Figaro, and its merry-go-round close to Act Two is a dazzler, thanks to singers who listen as hard as they give (splendid) voice, and to the pinpoint conducting of Christopher Stark and direction of Blanche McIntyre. At every moment in this seven-strand plait, the right character pulls briefly into focus and then recedes, and like the whole production, this is a perfectly calibrated treat.

Eighteenth-century costume is still being pulled on and the final props adjusted in Neil Irish's attractive design when the curtain rises on the comedy; that device helps put a little cooling-off space between us and the newly topical storyline of an older employer taking advantage of his younger, female employee. Figaro and Susanna are planning their wedding day, thwarted only by the Count, who would like one first pop at Susanna while his own marriage is in trouble. An oversexed page boy, Cherubino, and a clutch of hangers-on, all add complications. 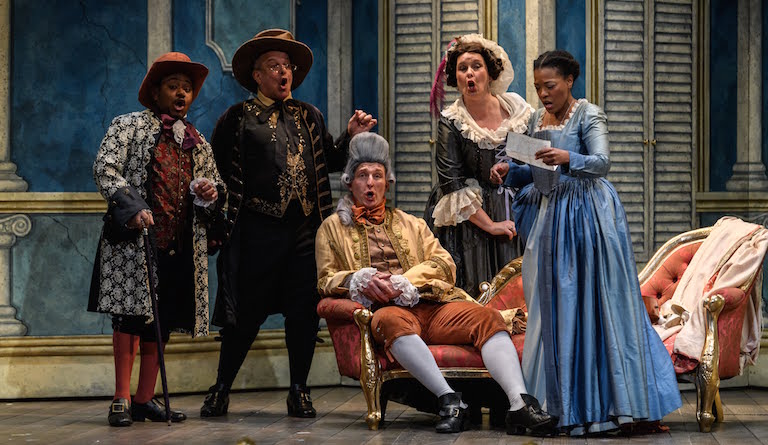 They can explain everything.... deceptions mount in The Marriage of Figaro. Photo: Jane Hobson

As Susanna, Rachel Redmond picks her way around the Count's traps with wit and aplomb. She handles her vocal line like a string of pearls, with perfect elements arcing into a beautifully defined and shaped whole. This is a voice to listen out for. The lovely, passionate voice of confidante and Countess, Nadine Benjamin, you can catch again this summer, in Isabeau at Opera Holland Park.

Ross Ramgobin's Figaro, growing in confidence, is a cheeky foil to Dawid Kimberg's pompous Count Almaviva, whose Rees-Moggian superciliousness is satisfyingly crushed in an Act Four that unfolds with welcome alacrity.

Katherine Aitken's nippy Cherubino, Abigail Kelly's Barbarina, and her gardener father, Devon Harrison's Antonio, outraged by the cavortings in the big house and the hangers-on, all turn in performances of equally balanced character and musicianship.

There is one more chance to catch this feisty Figaro (3 March); the company makes a welcome return to Hackney Empire in the autumn. Watch Culture Whisper for more details. 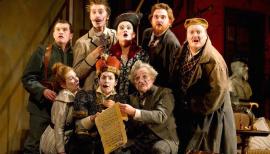