The singing star of Farinelli and the King talks about working with Mark Rylance, a new opera based on a surreal film, recreating musical history, and marriage 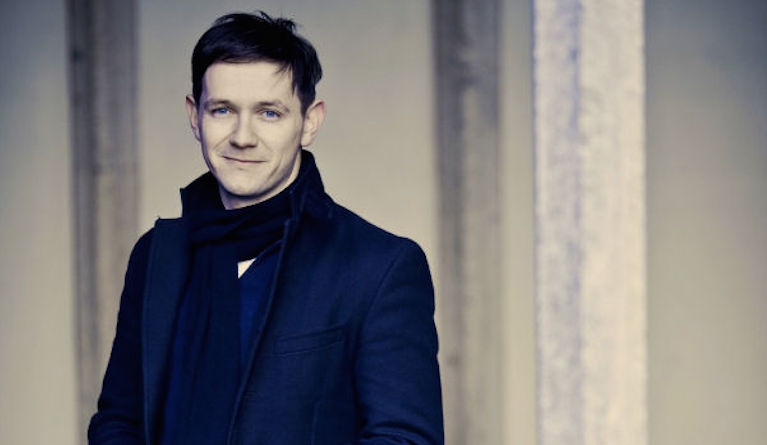 A surprise star of the London stage in the year that featured Imelda Staunton as Gypsy and Ralph Fiennes in Man and Superman was an English singer of church music and opera, Iestyn Davies.

Among those with a passion for early music and for the high counter-tenor voice, Iestyn’s was already a revered name. But the transfer to the West End from the Sam Wanamaker Playhouse at Shakespeare’s Globe of Claire van Kampen’s multi-award-winning Farinelli and the King put him in front of a whole new audience. Many ticket-holders might not have heard a man singing as high as a woman, at least, outside pop music – think Jeff Buckley, Franki Valli, Prince. And many were at the Duke of York's because they had loved the play’s other big star, Mark Rylance, in the smash hit Jerusalem.

The Jerusalem of Jez Butterworth’s 2009 play was a far cry from the Holy Land that features in the sort of repertoire that Iestyn often sings – the sacred oratorios of Handel and Bach. In the same year as Farinelli, 2015, he was at Glyndebourne in a landmark staged production of Handel’s Saul. Like all good artists he has been as a member of the audience too. (He recalls watching the house’s Bollywood Giulio Cesare on the same evening that Spice Girl Geri Halliwell attended, with a dog on her lap.)

In his twenties (he is now 37), he saw the outstanding German counter-tenor Andreas Scholl in Glyndebourne’s stylish Handel’s Rodelinda, a life-changing experience, as it was for many: 'I put two and two together, for the first time realising that there was a whole world of repertoire beyond Messiah and Bach’s Passions!' he said before taking up the role of David in Saul.

In the unusual casting of Van Kampen's play, Iestyn sang Farinelli's music for Rylance’s deranged King Philippe V, who is soothed only by song, while Sam Crane took the acting role of the castrato. Now the singer is settling in to another eccentric household, the lavish but nightmarish estate in the surreal opera The Exterminating Angel.

Based on the 1962 film by Spanish director Luis Buñuel, The Exterminating Angel is the third opera of Thomas Adès. It was given its world premiere in Salzburg last year, and now has its British premiere at the Royal Opera House, Davies is one of an astonishing 15 soloists – guests at a glamorous party that quickly turns sour.

'We’ve come from the opera, are invited to dinner, but as the evening progresses we find we can’t leave the room, although there’s no explicit reason why not,' he explains. 'We just can’t cross the threshold.' At first merely puzzling or comical, as three sheep join the party, the situation quickly descends into something less civilised, and even savage, as self-preservation challenges all social norms.

For the performers it is a demanding evening: by its nature, the plot allows for few exits and entrances: 'What makes it different from the film is that we’re all there all the time, and it’s a challenge for the director Tom Cairns to focus attention the the right person at the right time.' In the recent five-star Written on Skin, in which Iestyn also starred at the Royal Opera House as Angel 1, he found himself singing stage right while all eyes were stage left on another character, going slowly to her death.

Going from that angelic role to the demonic Exterminating Angel, as pill-popping Francisco he has a troubling on-stage relationship with the soprano Sally Matthews, playing his half-sister. 'We’re sort of in love with each other: it’s clear we’re a bit too close...'

It's all rather different from life at home in York, where Iestyn was brought up and now lives with his wife, Gemma. At their wedding last year in York Minster, Mark Rylance read lines about love from The Merchant of Venice. This friendship, which grew out of Farinelli, is being nurtured by rumours that the play, with its original stars, is to go to Broadway. There is also talk of a film.

In the meantime, there are the heights of The Exterminating Angel to scale, roped to other opera stars including the bass John Tomlinson, recently in English National Opera’s cheerful Pirates of Penzance, the baritone Thomas Allen, and the new generation of British opera royalty – soprano Sophie Bevan, tenor Ed Lyon, mezzo-soprano Christine Rice – plus Swedish mezzo Anne Sofie von Otter, and many others.

Adès will conduct the opera himself; sets and costumes are by the prolific German-born designer Hildegard Bechtler, whose recent designs include the impressive Waste at the National Theatre.

A few weeks later at the Aldeburgh Festival, Iestyn sings the role of Oberon in Benjamin Britten’s A Midsummer Night’s Dream (9-14 June), in a production by Netia Jones that celebrates 50 years of the Snape Maltings concert hall. The opera first premiered in Aldeburgh in 1960. Iestyn sang the ethereal music of the king of the fairies in a production at English National Opera in 2011, in a far from ethereal staging – out went the moody forest, and in its place came a school with a fast-running undercurrent of violence.

The counter-tenor who first created the role of Oberon was Alfred Deller. At the time, while there were men singing in the higher register within cathedral choirs, the often small voice was not used in opera. Deller made a bigger sound, but this was still not the full-blown voice that we enjoy today, in a golden age for the counter-tenor. He was also a reluctant performer.

‘Deller said to Britten that he couldn’t act, and Britten said, “You won’t have to do much!”. Oberon sings a lot of recitative, and in the arias he is on stage with Puck listening. People remember you afterwards, even though you haven’t sung a lot.'

And that’s basically because Oberon’s opening bars, 'I know a bank where the wild thyme grows..., are among the most enchanted in all music. Especially when sung by a voice like this one. Angels, fairies …. it all sounds a bit otherworldly in the land of the counter-tenor. You could be forgiven for feeling rather as Gemma did, when the couple first met: “She didn’t have any knowledge of what I did. Couldn’t name a single opera. I introduced her to this whole world of opera.”

It's what Iestyn Davies keeps on doing, through Farinelli, his 2013 Last Night of the Proms, and mould-breaking productions that reach new audiences. And that's a type of magic in itself.