Dean's Hamlet, with its libretto sticking closely to the original by Matthew Jocelyn, is given its world premiere at Glyndebourne, which commissioned the opera amid the 400th anniversary commemorations of Shakespeare's death in 1616. Its debut is something of an event – in its 82-year history, the Sussex opera house has given the world premieres of only six operas.

'Even the fact that Hamlet is a thinker, a man given to self-awareness and self-appraisal, lends itself well to opera,' Dean continues. 'The play provides frozen moments for him to express feelings; built in "aria moments". There's a lot of humour in the piece too, as always in Shakespeare.'

Dean, 55, was an award-winning viola player before he turned to composition in his late twenties. For 15 years he played with the prestigious Berlin Philharmonic Orchestra. Among his other compositions are concertos for viola and for clarinet. And it is the singing nature of those instruments and his gift for spinning a story from a single line that pave the way to this, his second opera. 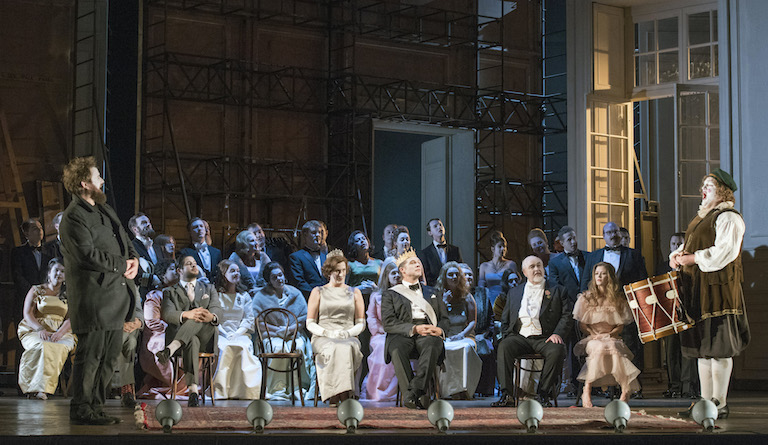 'The play's the thing wherein I'll catch the conscience of the King. Hamlet lays a trap at Glyndebourne. Photo: Richard Hubert Smith

In a predominantly British cast, the title role is sung by Allan Clayton, with mezzo-soprano Sarah Connolly as Gertrude, tenor Kim Begley as Polonius and bass John Tomlinson as the ghost of old Hamlet, The virtuosic Canadian soprano Barbara Hannigan, who recently dazzled audiences at the Royal Opera House in another new work, Written on Skin, makes her Glyndebourne debut as Ophelia.

Former Glyndebourne music director Vladimir Jurowski returns to Sussex to conduct Hamlet, which is directed by Neil Armfield. All in all, it's an event well worth jumping on the train for.

Hamlet is sung in English.

Royal Opera House 2017/18: curtain up on a whole world of emotions
Sign up to CW’s newsletter
By entering my email I agree to the CultureWhisper Privacy Policy (we won`t share data & you can unsubscribe anytime).
1