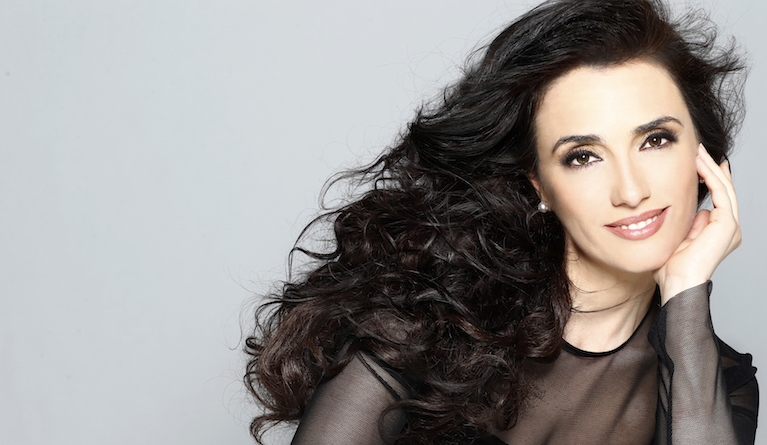 But this (abbreviated) list doesn't end here, for next to each venue is written the same role: in Puccini's Madama Butterfly, the title role, Cio-Cio-San. Ermonela is the world's go-to Butterfly, one of only a handful of singers whose outlook and physique convince as a love-sick 15-year-old, while the voice has enough welly to project across the biggest auditorium. She has other roles aplenty, of course, notably Violetta in Verdi's La Traviata, an opera that has special associations with the Royal Opera House, where Ermonela is to appear as Cio-Cio-San this spring.

In one of those backstage stories as a good as the feel-good movies with which she likes to relax, Ermonela was flown in at hours' notice to replace the great Russian soprano Anna Netrebko in La Traviata in January 2008. She remembers the audience's sigh of disappointment when the casting change was announced before curtain-up. But by the end of the evening the house was on its feet, ecstatic. 'Netrebko, u can go home now,' commented one satisfied customer. Ermonela is more matter-of-fact: 'You have to be ready for that moment. As human beings you have something special and powerful when you are really at the edge.'

She remembers stepping out on to the stage at Covent Garden: 'It looked like the most gigantic opera house, like the Arena of Verona.' But such 24-hour turnarounds are the exception. Even when the role is a familiar one, all the music buttoned up long ago, preparing for a new production is intense. 'The public see only the finished result, but you have to train every day like a marathon runner. We're singing without microphones' – this comes as a surprise to some first-time opera-goers, and to cinema audiences who watch live relies such as the one on 30 March, for this Madama Butterfly. 'And we travel like crazy.'

When she goes from Butterfly to Butterfly, with each time a new director and a new tenor as her US Navy husband Lieutenant Pinkerton, she brings to the role elements of her own interpretation, but has to be ready to take them down new routes. One production in Cologne had her not as a Japanese girl, but as an American, playing out the story of the disastrous marriage in her head. Another set the whole thing in a psychiatric hospital. (Every generation throws up a handful of directors who think it will be cutting-edge to set a familiar opera in a psychiatric hospital. Or a boarding school. They are always wrong.)

Ermonela's job is to recall the passions of a teenager, the delirious love, the rebellion against sage advice and the capacity for extreme action. Butterfly is prepared to take her own life rather than lose the man who has betrayed her by discounting their marriage and marrying again, in his home country.

At 14, the singer herself was discovering opera for the first time, in her home city of Tirana in Albania, where she had a modest upbringing with her father, 'an idealist', and mother, 'the most generous person I have ever met'. The opera was La Traviata 'and I fell in love – with opera'. She told her brother: 'I won't die until I have sung Violetta!' She has now not only sung the role of the society hostess who gives up her lover to protect his family from scandal, not only covered it for Netrebko; she has sung it more than 240 times.

But of the more innocent Cio-Cio-San she says: 'We have all been there. There are certain feelings that, if everyone goes back in time, they are there. In Butterfly everyone is telling her that the marriage is not the right thing, but she is in a bubble. And we all want to feel unconditional love: if the others can't see that love, it doesn't mean it doesn't exist for her.'

Despite its setting in Nagasaki, Butterfly is, says Ermonela, thoroughly Italian. 'The music is Mediterranean, 100 per cent. Puccini approaches the music through the drama. It's a verismo opera: his music goes straight to the emotions. And he changed it several times. The first performance wasn't successful, and he made several cuts to make it more dramatic. It is Mediterranean with certain colours from Japan.'

Although her schedule takes her from city to city, and London is buzzing outside her rented flat near Covent Garden, the singer leads a very sheltered life between rehearsals, and once performances begin. 'I avoid crowds. If I pick up even a little cold, whereas in other jobs you can still go to work, on stage you don't have that luxury. I keep silent, and read, go to the gym, and rest, and watch films that make me happy.'

The athlete-style regime pays off. In a recent Spanish production of Verdi's Otello, Ermonela was on great form singing Desdemona, but tenors were falling by the wayside faster than you can say 'jealous husband'. 'I got through five Otellos,' she laughs. 'Five tenors!' They clearly hadn't had her hermit-like training.

So if you go to the Royal Opera House's Madama Butterfly – and it is a very fine production – don't look round in the restaurant afterwards for a diva in furs with a glamorous entourage. Ermonela Jaho will be tucked up at home with a good book.

'Madama Butterfly' (23 March - 25 April) is sung in Italian with English surtitles at the Royal Opera House, Covent Garden. Ermonela Jaho sings on 20, 23, 27 and 30 March, and on 4, 7 and 10 April. The performance on 30 March is relayed to cinemas: click here for more details.