In True Detective episode four, the season reaches its halfway point and Wayne (Mahershala Ali) is close to finding answers

True Detective episode 4 review 5 True Detective episode 4 review Euan Franklin
Nic Pizzolatto has always written (or co-written), but never directed. It’s an understandable dynamic, especially in television: writers in their corner, directors in another. But at some point, the fields want to merge. Look at David Chase for The Sopranos or Vince Gilligan for Breaking Bad or David Benioff and D. B. Weiss for Game of Thrones – writers/creators are almost expected to take up the mantle.

Pizzolatto has now done the same, making his directorial debut halfway through this long-anticipated season of True Detective. The pressure’s on, but Pizzolatto pulls it off – making episode 4 one of the best episodes of all three seasons.

In The Hour and the Day, the ’80s Wayne (Mahershala Ali) and Roland (Stephen Dorff) are close to the tails of a potential suspect – finding leads in the local church, to a woman (Candyce Hinkle) who made those disturbing dolls found at the murder scene. In 1990 Wayne is re-ingratiated into the police force to find Julia Purcell, and in 2015 old man Wayne tries to find out everything uncovered by the documentary filmmaker Elisa (Sarah Gadon). 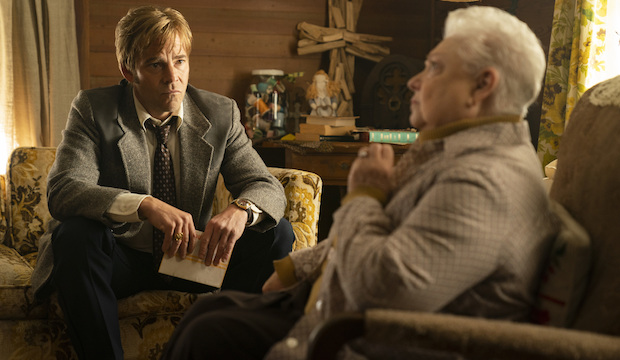 Episode 4 was really the decider for the season, and maybe the series. If things didn’t start picking up, then it might’ve drifted into tedium. Although the stretched pace and gradually built characters are immersive in their approach, patience started to thin out like Wayne’s receding hairline. But Pizzolatto, taking both directing and writing duties (sharing credit with Deadwood writer David Milch), manages to achieve so much while revealing so little (not outright, anyway).

The racial tensions, which proved fatal last week, finally explode when the detectives visit a trailer park populated by African-Americans. Similar to Spike Lee’s BlacKkKlansman, the venom for police – especially if they’re black – pulses out of the screen.

When they’re interrogating a black man in front of the whole neighbourhood, he aggressively asks Wayne ‘How you gonna wear that badge?’. And with exciting bluntness, barely missing a beat, Wayne responds with ‘It’s got a little clip on it.’

If there’s one remarkable aspect of Pizzolatto’s direction, it’s his tension. Anything can happen, and one wrong move can spill blood. 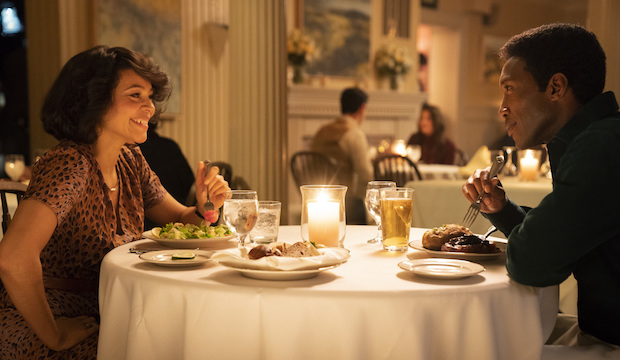 This tension broadens from violence to romance, showing the rise and fall of Wayne’s relationship with Amelia almost side by side.

They go on their first date together, and the scene ripples with their seductive back-and-forth. It’s like a multifarious tennis game, several different balls volleyed at the same time. They talk about blood and murder, drifting into family backstories, and the air simmers with sexy innuendos – all while eating posh salads in a dark restaurant. It’s easy to love their fire for each other.

But then Amelia seems to be investigating the case herself, clearly having too much interest – maybe enough to be considered a suspect. She may not be wholly innocent in all this…

Episode 5 is a thrilling, frightening midway point. Both investigations (ten years apart) are in full swing, the world that Wayne and Roland are dropped into has expanded, and the puzzle-piece clues are starting to build a full picture. Hopefully, season 3 will keep up the pace.