They Shall Not Grow Old film review ★★★★★

Peter Jackson's WWI documentary They Shall Not Grow Old colours and dramatises original footage from the Western front – creating a brutal, tangible experience

They Shall Not Grow Old film review 5 They Shall Not Grow Old film review Euan Franklin
It’s sometimes hard to believe that colour was seen as an innovation for fantasy and black-and-white was considered more real – illustrated by the famous shot in The Wizard of Oz where Dorothy opens a sepia door leading to a saturated dream. It’s since been reversed, of course, with colour becoming the natural standard and black-and-white being, as critic Roger Ebert said, like a ‘mysterious dream state’.

Nothing demonstrates this new reality more than Peter Jackson’s new WWI documentary They Shall Not Grow Old, as soldiers on the Western Front seemingly walk from their grainy and monochrome fantasies to the grim and colourful reality of life in the Trenches. 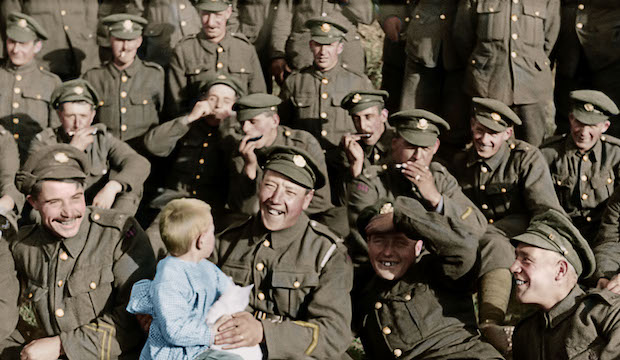 Jackson used original footage taken from the Western front, and even converted it to 3-D

Jackson is known for his fairytale blockbusters like The Lord of the Rings and King Kong, both wading in the thrills of escapism, so a poignant detour into the First World War is somewhat unexpected. A certain degree of fantasy is still used – Jackson colourised old war footage from the time, brought in lip readers to insert pre-recorded dialogue between the soldiers, and foley sounds are added to imitate the bullets and splashes and tank treads rolling through the mud.

He succeeds not only in showing the war, he takes us there. The War to End All Wars isn't a black-and-white fantasy anymore – it’s tangible, imaginable.

Like Wizard of Oz, a transition is made between different worlds. We start with a gentle move into the stuttering black-and-white footage, narrated by WWI veterans (audio taken from archived interviews) recounting how excited they were to join up, some being as young as 15. Only in training were they conscious of an impending threat. And when they reach the Trenches, the picture widens and, like when Dorothy opens the door, the colour hits the screen like machine gun fire. 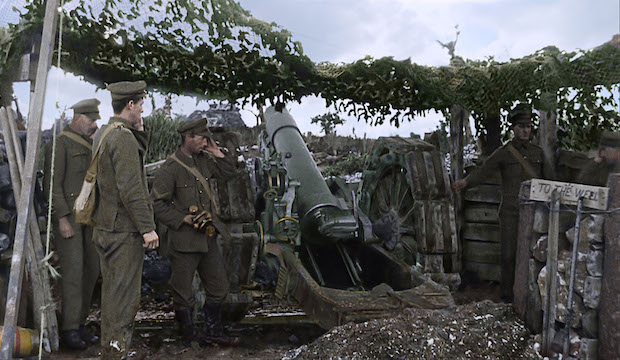 Like with most documentaries about life in the Trenches, the harsh conditions are hard to come to terms with, creating tremors under the skin. With sound and colour, it’s even more upsetting. Jackson drops us in the thick of the action, in an environment stuffed with dead horses, mangled soldiers, and flesh rotted from gangrene. His technological innovations provide an extremely human look at a distinctly inhuman area of history.

However, despite this, an astounding element of the film is its humour and light-heartedness – since that was how soldiers got through the fear, often when waiting on the edge of battle. Jackson has stated that he doesn’t like certain WWI movies because they’re often deprived of light, drowning in the darkness of the war. He keeps the humour, making the soldiers’ journey not only more entertaining, but more tragic as a result.

There are few documentaries that deserve to be called ‘poetic’, and They Shall Not Grow Old is one of them. Its images creep and crawl and stick like a spider in the mind. There isn't much about the politics or the history – it’s all about the soldiers, many of whom didn’t fully understand what the war was about. Through his real and riveting display, Jackson makes sure we remember them.

They Shall Not Grow Old is released in cinemas on 9th November, and airs on BBC Two at 9:30pm on 11th November

They Shall Not Grow Old