In episode five of Doctor Who, The Tsuranga Conundrum, the Doctor (Jodie Whittaker) and friends wake up on a medic ship. But something dangerous and hungry is on board...

Doctor Who episode 5 review 4 Doctor Who episode 5 review Euan Franklin
Series of Doctor Who never run in a straight line when it comes to quality – they are in constant flux, bouncing up and down while (usually) maintaining entertainment value. After the disappointing mediocrity of episode four, in which big spiders roamed around Yorkshire, writer/showrunner Chris Chibnall returns to deep space in The Tsuranga Conundrum – and more than makes up for last week.

The Doctor (Jodie Whittaker) and company (Tosin Cole, Mandip Gill, and Bradley Walsh) are searching around a world-sized rubbish tip – referred to as a ‘junk planet’ – and find a sonic bomb under the debris. It goes off and everyone wakes up on a medic ship, with doctor Astos (Brett Goldstein) leading it to a space station. But something climbs on board, something hungry, which damages the system’s vital functions and threatens the gang’s chance for safety.

This episode plays like a classic action thriller, catered for children. Safe options are annihilated in favour of dangerous ones and new issues rise to the forefront. As the little eating machine bites through the ship, Astos and the Doctor find out that the space station they're travelling to will shoot down any ship that carries a threat – so they have to shake off whatever's on board. 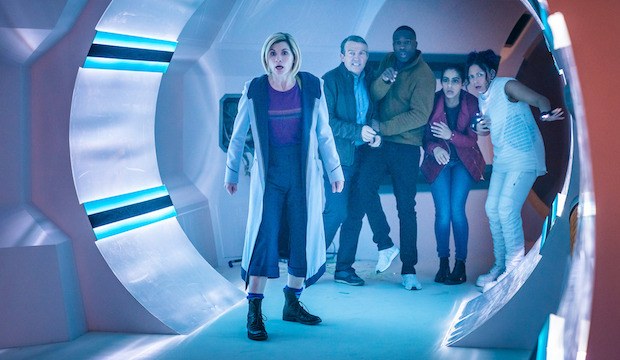 And amongst all the set-shaking pandemonium, a surreal and very Doctor Who sight takes place: a pregnant man (Jack Shalloo) goes into labour, and Ryan (Cole) and Graham (Walsh) must help him give birth. It’s all systems go, and everyone is needed.

There are a few unconvincing pauses in the story, mainly to elaborate on character, but the dialogue in general is less forced and less aphoristic than in previous weeks. It’s a massive improvement on certain ear-curling lines dotted through this series. The character moments are quite touching and funny, especially as Ryan talks about his absent father and subsequently assists in delivering the baby of a pregnant dad. There are few other shows where that’s expected to work.

The Tsuranga Conundrum is Doctor Who at its most fun and perilous, without hindering the strength of the writing (as in last week). Chibnall could’ve wracked up some of the tension more by creating conflicts within the group, helping us see their strain. Some efforts are made in the sibling relationship between General Cicero (Suzanne Packer) and her engineer brother Durkas (Ben Bailey Smith), but the spats between them are minimal. Still, the episode was an enjoyable adventure. Let's hope the standard goes up from here.