As the second volume of the Villanelle trilogy hits the bookstores, its author, Luke Jennings, talks to Culture Whisper about the books and their TV alter ego, Killing Eve

You know, the one that brings together the frumpy, chaotic but dogged MI5 agent Eve Polastri, played with irresistible conviction by Sandra Oh, and the psychopathic young Russian assassin Villanelle, a chillingly sassy Jodie Cromer, in a thrilling hunting game spiced by the two characters’ mutual fascination.

Adapted for TV by Phoebe Waller-Bridge (Fleabag, Crashing), as Killing Eve, the origin of the series lies in Luke Jennings’ Villanelle books, the second volume of which, No Tomorrow, has just been published. 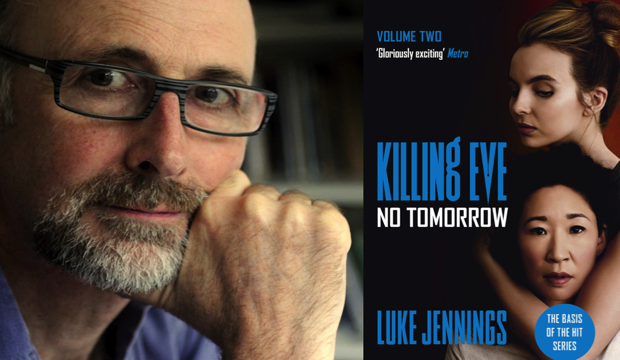 Luke Jennings’ day job is as The Observer’s ballet critic; so, naturally, Culture Whisper’s first question was, where in his imaginary did these two women spring from.

Luke Jennings: 'Well, I’m not sure. It’s very difficult to answer where any character comes from. An idea is built up in layers. I’d been backwards and forwards to Russia and I had the idea of this young girl growing up in Perm, and this fed into ideas that I’d had for a thriller for a long time.'

CW: You had written fiction before, but not thrillers.

LJ: 'They were novels on a variety of subjects, I suppose literary fiction would be the shelving classification; but I had always been a keen reader of thrillers, and I know about the form, I’d followed thrillers for quite a long time.'

CW: But what you attempted to do with the Villanelle series was in many was to subvert some of the classic tropes of detective fiction, wasn’t it?

LJ: 'That was very deliberate, yes, one of the reasons that I hadn’t written thrillers before was, I enjoyed thrillers, but I was very unsatisfied with the form in the way that it has recently developed, with these very cardboard characters, very tech-dominated, very gadgety, very obsessed with neurotic male states; and to be honest I just thought that was all a bit silly, boring, and I wanted to do something that was more fun to read.'

CW: And then Phoebe Waller-Bridge took it over and turned it into a TV series that became cult viewing. As an adaptation, Killing Eve seems to have developed on a slightly different track from the books, so that now you have two parallel tracks of Villanelle. Do you feel that story and characters are slightly running away from you?

LJ: 'No, I don’t really. What I feel is that the television adaptation has to be different. It’s a different medium, it has different requirements, obviously it’s visual and verbal, it works completely differently, and there are also the requirements of filming. For example, I wrote one story set in Shanghai, that’s just not particularly practical. As we see it now, that story takes place in Berlin. So, there are those modifications, and some of the characters have been changed, and some of the plot lines have been changed. But I think you really run into problems if you have fiction trying to track television or vice-versa – they’ve got to go their own ways.

'The way I see it is, all these stories exist as multiple adventures of the same characters, in the same imaginary universe, so, in a way, the more the merrier. The relationship between the two women remains the same in the books and in the TV series – they’re complementary.'

The second TV series of Killing Eve is in the works, so, if you’re feeling bereft having just watched the last episode of series 1 (BBC1, 3 Nov 2018), and are itching to know how that particular cliffhanger will be resolved, there is something to look forward to in the new year.

Meanwhile, of course, you can – and arguably should! – get stuck in the second book of Luke Jennings Villanelle trilogy, No Tomorrow, now in a bookshop near you.