They want her to perform a role, an horrendously dangerous one, in which she’s to go undercover as a terrorist to infiltrate a notorious Palestinian group led by ‘Khalil’. ‘Joseph’ will play one of the terrorist brothers, with Charlie as his partner.

This plot is both familiar and enticing, as any undercover process always is. But when done well, as in The Departed or various Tarantino movies, the ‘characters’ they play are fascinating in themselves. Episode two is dedicated to Charlie stepping into the character she’s agreed to play, starting with some emotional revelations about herself, pressed by Kurtz and ‘Joseph’. 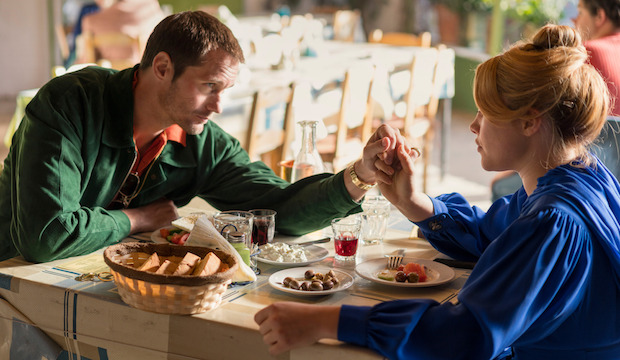 Alexander Skarsgård and Florence Pugh in The Little Drummer Girl

Her and ‘Joseph’ build their characters along the way, he offers backstory, while she provides reactions. Being herself is key, only in a different dress. It’s like they’re the real writers of the series, engendering their own destiny. As ‘Joseph’ says: ‘we’re building a fiction and our audience is everywhere, all the time’.

Regrettably, episode two doesn’t possess the same pulse of episode one, but it’s still splashed with dazzling colour and movement. The spark between Charlie and ‘Joseph’ (or 'José', or ‘Michel’) flutters in a fairly unromantic way, but there’s an energy there, a force that seems to push them together. It’s like they’re good friends who fancy the pants off each other. Will their connection eventually explode?

This episode is more of a build up to something grander, establishing the character Charlie’s inhabiting and the excruciating risks involved. Her preference of mortal danger over amateur theatre isn’t entirely convincing, but the thrill of its fantasy is rewarding. And we can’t help but wonder: is Charlie really up to the challenge? Is she willing to die for it?