The fan-favourite podcast is back as an all-new TV adaptation, directed by Mr. Robot creator Sam Esmail

Homecoming arrives on Amazon Prime this Friday Homecoming arrives on Amazon Prime this Friday Celia Morris
Homecoming began life as a podcast. It was a fierce success, and not only did it receive critical acclaim (it was named a finalist for the 2016 Peabody awards), but it was almost immediately pursued by TV and film producers. Having received a two season straight-to-series order from Amazon, there’s no sense that Homecoming will be pulling any punches.

Described as a 'mind-bending psychological thriller’, the series will focus on Heidi Bergman, an ex-therapist who worked at the Homecoming facility for soldiers transitioning back to civilian life. Four years after quitting her job, an auditor from the Department of Defence seeks her out and questions her reasons for leaving. She's hiding something... 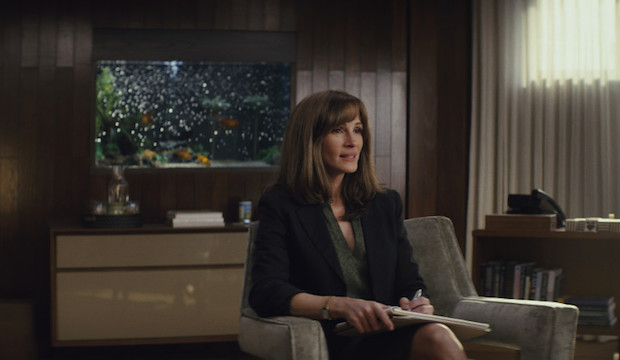 Who's in the Homecoming cast?

Hollywood star Julia Roberts (Pretty Woman, Wonder), who rarely does television, is in the title role as Heidi Bergman.

Also in the cast are Stephan James (If Beale Street Could Talk) who plays Walter Cruz, one of the facility's soldiers, and Bobby Cannivale (I, Tonya) who plays Colin Belfast, Heidi's boss.

Who's behind the scenes?

Mr Robot director Sam Esmail is directing all ten episodes. In an interview with Variety, Roberts said that her and Esmail had a natural chemistry: 'the thing I rely on utterly, is my director'.

Esmail adds to this by saying 'We were all friends and we all really liked each other. It was genuine, it was authentic.'

Eli Horowitz and Micah Bloomberg, who created the original podcast, return to write the TV series.

Homecoming will be available on Amazon Prime from Friday 2nd November