In Episode 6 of Doctor Who, Jodie Whittaker goes back in time and across the water to the Punjab in 1947. Religious riots are raging and alien demons are lurking...

Yaz (Mandip Gill) is curious to know more about her grandmother’s history, and so insists the Doctor (Jodie Whittaker) take them back in time to find out for themselves. The TARDIS goes to a farm where Yaz’s grandmother Umbreen (Amita Suman) resides with her partner’s family, right on top of what became the India-Pakistan border. However, when the Doctor and Co. arrive, massive predatory ‘demons’ are lurking around, apparently killing the locals. But why?

It’s almost regrettable that Doctor Who has to follow a certain format: namely that there has to be aliens or adversaries from the future, no matter what. In this episode, Demons of the Punjab, the featured aliens have a nice pinch of poetry built into their mythology, but they’re not all that relevant to the more engaging tale of the family. 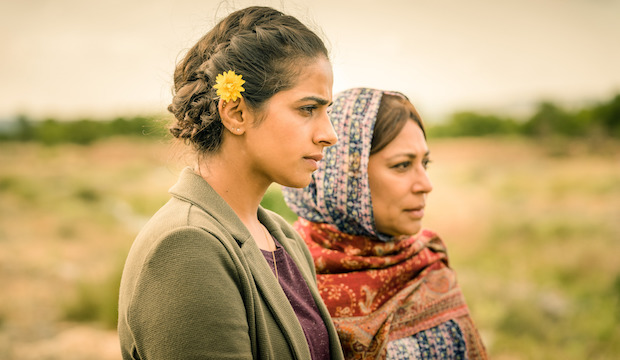 Mandip Gill and Shaheen Khan as Yaz and Hasna, set during the Partition of India

Umbreen is a Hindu who’s about to marry a Muslim, Prem (Shane Zaza) – but Prem’s brother Manish (Hamza Jeetooa) deeply disapproves, mostly influenced by the upcoming segregation caused by the Partition. Hindus had to reside in India and Muslims in Pakistan, causing an ancient and aggressive rift to reopen between the religions. The best scenes in the episode are when this divide is most furious, even violent – as Manish’s beliefs clash with love for his brother.

The emotion is slightly short-changed by the aliens, whose presence is rather formulaic. Indeed, most of the conflicts around these creatures, which bare some resemblance to the aliens in Predator, prove to be false. However, Patel captures a small but important part of a traumatising time. Although this episode doesn’t reach the political poignancy of Rosa, it’s still an emotional piece of historical drama.