In Cleaning Up episode 4, Sam (Sheridan Smith) has to delve into her conning talents to support her new alter-ego. But now, there's a greater risk of 'Nancy' being revealed

Cleaning Up episode 4 review Cleaning Up episode 4 review Euan Franklin
Silliness, and a willingness to accept silliness, has a limit. Cleaning Up was always predicated on nonsense, but it’s fun nonsense. A cleaner taking advantage of massive corporations and making money from them, what’s not to like? But in episode 4, with the end in sight, the nonsense reaches new heights – to the point where it feels like writer Mark Marlow is trying to out-silly himself.

Starting from the end of episode 3, Sam (Sheridan Smith) tries her best to maintain her persona as ‘Nancy’ while Frances (Rosa Cavalier), a head at the firm Sam cleans for, is around the same table.

Sam carries off her alter-ego and, in between warding off a concerned Alice (Kristy Philipps) and preparing for Lily’s (Anya McKenna-Bruce) birthday party, she attempts to make even more money with Jess (Jade Anouka) and Mina (Branka Katic). 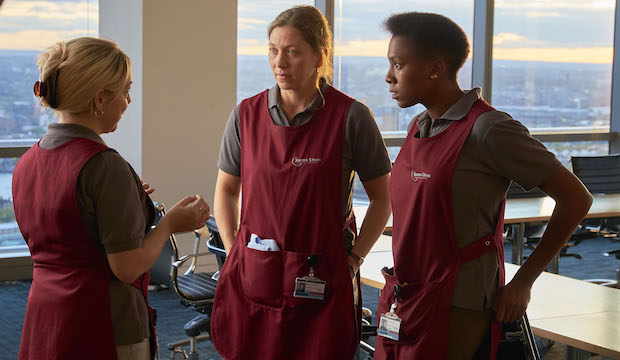 Frances doesn't recognise Sam, which is hard to believe. Marlow seems to be making a point: cleaners are barely noticed by the higher ups, so of course Frances doesn’t recognise her.

It’s not like she called a meeting with all the cleaners to investigate the mic in the vent. Oh wait, she did. Well, Sam could’ve been camouflaged with all the other cleaners – it’s not like Frances personally interrogated Sam. Hang on, she did that too! It’s a very unsteady, unconvincing conflict – hard to enjoy because Frances is made to be so blind.

Cleaning Up retains some of its fun, usually during the heisty sequences and Glynn’s (Robert Emms) cluelessness, but it’s growing into something that can’t stabilise. If Marlow doesn’t shake the formula and hold back the nonsense, his show will be cleaned away and forgotten about.