Born to the giantess Angrboda after a fling with preening Norse god Loki, Hel is, like her wolf and snake brothers, a repellant thing – in her case, half human, half rotting corpse. So while her top end looks for love in girlish plaits and Nordic knits, her putrid nether regions rot and congeal into a permanent prison.

On this perhaps unpromising central character turns The Monstrous Child, the action-packed and often surprising first opera in the new-look Linbury Theatre, that has all the high production values of the main Royal Opera House upstairs, but also a rare intimacy. 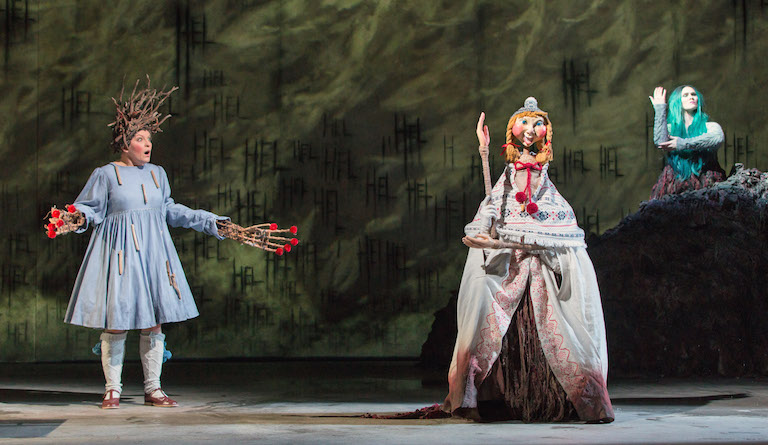 Lucy Schauffer, left, as Modgud is gatekeeper in the world of the dead for its new queen, Hel, who appears in both puppet form and sung by Marta Fontanals-Simmons. Photo: Stephen Cummiskey

Cast out by her grotesque mother, Hel is banished from the whiter-than-white domain of god Odin too, because of a prophesy that Loki's children will prove deadly. Odin appoints her queen of the dead, and she languishes in this underworld, dreaming of Odin's handsome and kindly son Baldr. When a freak event brings Baldr to her world, she believes she will be loved at last, but learns the hard way that true love is selfless...

For this important new venture at the Royal Opera House, new names abound alongside certain stalwarts, and in this impeccable production there is much to marvel at. From the opening moments, when the sound of dripping water on stage is finally overcome by the slowly growing murmur in the orchestra, there is a very satisfying interplay between musical and visual effects: this opera is a model of coherence and sensitivity to each of its components. And that murmur quickly turns into a something truly terrifying. Amazing what you can do with a generous handful of instruments from the orchestra's underworld – double bass, contrabassoon, muted trombone, bass clarinet...

Directed by Regent’s Park Open Air Theatre artistic director Timothy Sheader, making his Royal Opera debut, it is simply great theatre with great music. Composer Gavin Higgins, also making his debut not only at Covent Garden but in opera, is completely at home, with the help of the inestimable Aurora orchestra and terrific singers, all under Jessica Cottis. A fast-moving score has a distinctive trajectory of its own through this vivid tale, while incorporating traditional elements, such as an air sweetly sung by Hel. 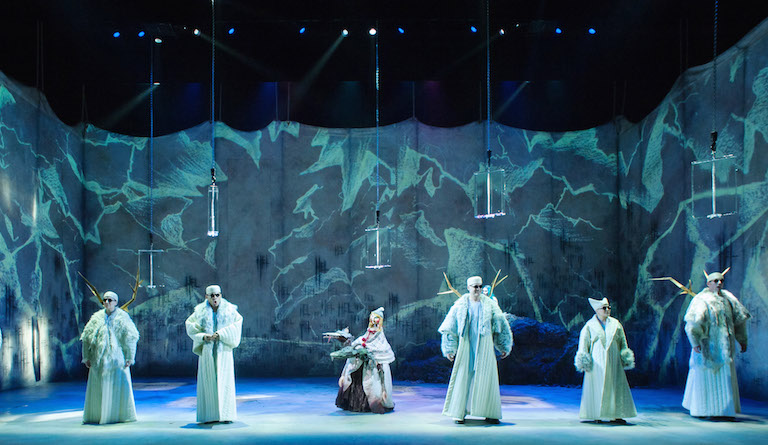 Hel and her wolf and snake brothers are banished from Odin's icy world. Photo: Stephen Cummiskey

Librettist Francesca Simon, who wrote the novel on which the opera is based, draws on her insights into the stroppy and young illustrated by her Horrid Henry series of books, and there are many succinct and witty lines, all the more enjoyable for the immaculate diction.

The Monstrous Child has been years in the making, having matured and grown from a workshop of a few minutes. In from the start was
mezzo-soprano Marta Fontanals-Simmons in the title role, making her Covent Garden debut, and joining the ranks of operatic characters doomed for eternity, despite being in possession of a lovely voice. Hel's supernatural world can trace its centuries-old operatic lineage through Purcell's Dido and Aeneas, Mozart's The Magic Flute, and Wagner's The Ring, and Britten's Turn of the Screw, and she has her familiars, notably the gatekeeper to the world of the dead, Lucy Schauffer amusing as Modgud. 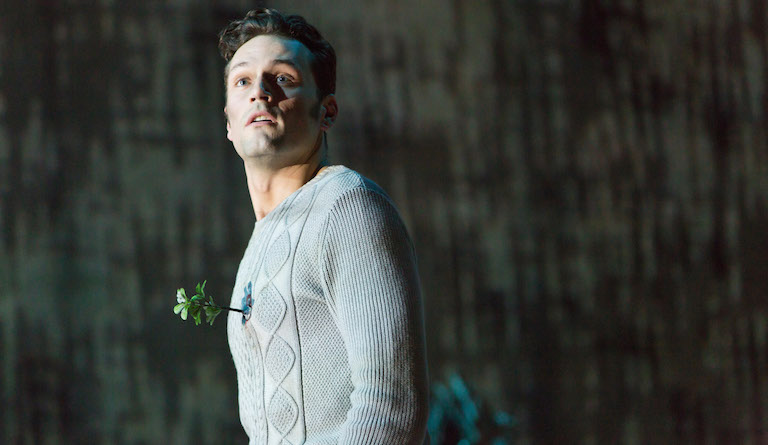 As dishy Baldr, one-time baritone Dan Shelvey – yet another house debut – sporting Oxford bags, a flying jacket and shades, demonstrated his new-found tenor voice to great effect: audiences will be very happy to see his name come up again. Bass Graeme Broadbent is one of the few familiar faces, with his grave and sonorous Odin.

The Monstrous Child will stop at nothing to make its mark. And this it does, in a big way. Aimed at over-12s, it may not be the piece that gets children into opera – the giant comedy vulva from which baby Hel pops helps puts paid to that – but it may be the work that keeps them there.

The Monstrous Child is sung in English. Performances last about two hours, including an interval.