In Azazel Jacobs' new dark comedy, Michelle Pfeiffer plays a Manhattan widow who spends her entire inheritance and has to move to a flat in Paris. Lucas Hedges also stars

But Azazel Jacobs' new dark comedy film French Exit takes a different tack: following the wealthy Manhattan widow Frances Prince, who goes broke after spending all her inheritance. With her son and her cat, which could be the reincarnated spirit of her late husband, Frances moves into somebody else’s empty holiday apartment in Paris. Billed as a ‘tragedy of manners’, here’s everything we know about the film.

Adapted by author Patrick DeWitt from his own 2018 novel, the story examines this weird, fashionable and bleak widow as she gathers a group of eccentric personalities around her. This includes an investigator, a medium and a fellow immigrant. She also has a destructive streak about her, seen in the trailer, as she burns some table flowers at a restaurant and then asks for the bill.

But much of the film is about Frances’ relationship with her son, unreasonably strong considering her exhausting temperament.

Who's in the French Exit cast?

Frances is played by a morbidly funny Michelle Pfeiffer, who spoke to EW about the role: ‘I liked her strength, that she’s feisty and smart – and damaged. I always like playing those characters.’ There’s been some speculation that Frances could earn Pfeiffer an Oscar nomination, her first since Love Field in 1992. We’ll have to wait until Monday 15 March to learn more.

Known chiefly for his Sad Boy roles in Honey Boy, Ben is Back and Boy Erased, Lucas Hedges plays Frances’ son Malcolm. This looks different from his standard casting, injecting some fun and humour into his character. The film also stars Imogen Poots (The Father, I Know This Much is True), Tracy Letts (Little Women, Lady Bird) and Danielle Macdonald (Unbelievable, Patti Cake$).

Right now, French Exit is scheduled for Friday 26 March. But given the recent news about lockdown easing, the film could be moved to a cinema release in May. Watch the trailer below. 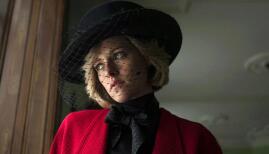 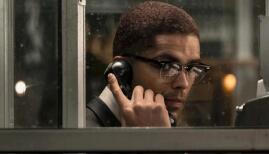