With a title like Another Round, you expect plenty of drinks and drinking. And Thomas Vinterberg, the director of this Oscar-winning tragicomedy, really delivers. The film binges through beer and red wine and white wine and whiskey and vodka and jazzy pink cocktails; they all look tasty. Similar to when you watch Bake Off and want to consume every cake in sight, this drunken Danish odyssey – embarked upon by four depressed and dissatisfied teachers – makes you crave a good drink.

Not that that’s a good thing, as Vinterberg ambiguously hints throughout. The history teacher Martin (Mads Mikkelsen), psychology teacher Nikolaj (Magnus Millang), music teacher Peter (Lars Ranthe), and football coach Tommy (Thomas Bo Larsen) decide to test an alcohol-related theory by the Norwegian psychiatrist Finn Skårderud. The theory, which Skårderud has claimed is a misquote, states that humans are born with a blood-alcohol content that’s too low. 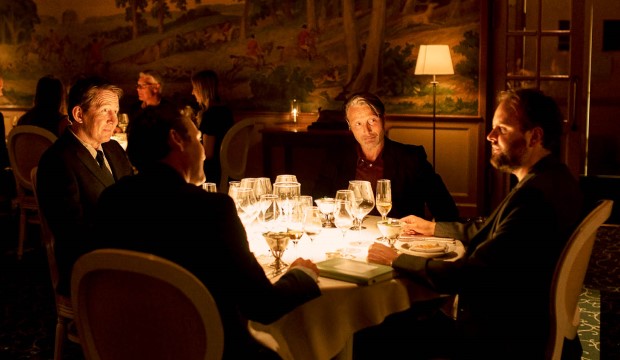 After a decent night out, probably the first dose of drunken abandon they've had in years, these teachers want to stretch that ideal state to each and every day. You get the sense that they’re over-intellectualising the theory on purpose, just to have a reason to drink as much as possible. Nikolaj even draws up an academic paper to record the experiment.

And therein lies the tragedy underlying the intoxication. Though there’s some comedy, not all of it funny, Vinterberg excels when mixing the sadness and humour together. He focuses on the especially downtrodden Martin, who’s ashamed by his ennui. He even breaks into tears over how bored he is and how boring he’s become.

Mikkelsen plays him beautifully, and it’s a refreshing divergence from his more intense and better-known roles in Casino Royale and Hannibal. He’s more passive and pathetic here, as his character mumbles through his history lessons like his soul has been sucked away. The others experience similar bouts of apathy. It’s no wonder why they hide bottles in the school.

The constant drinking (maintaining a blood alcohol count of 0.05%) injects a lot of energy into their teaching styles, benefiting their pupils. That’s where much of the moral ambiguity comes in. It’s lovely to watch Tommy inspiring his little football players or Peter making his choir sing better or Martin sparking some life into his history lessons. Even Nikolaj’s academic thrill at writing down the results is somewhat fulfilling. They’re all finding new purposes, new ways of living. 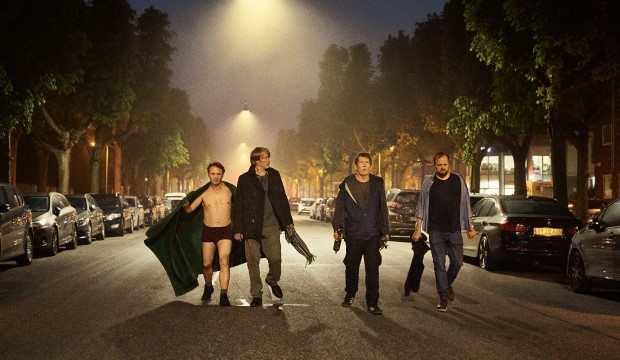 Obviously, the flawed experiment bursts like a beer bubble – unleashing many predictable consequences. They push their blood alcohol levels further and further, eventually reaching pandemonium. One hilarious scene sees them stumbling and struggling through a supermarket.

Although the women in the film are barely more than mothers or wives or strict disciplinarians, the sad and funny flurry of male egos is integral to Another Round. They model themselves on Ernest Hemingway and Winston Churchill, i.e. great men who drank all day. They’re also trying to recapture a lost youth, reflected in the fun-loving teens they teach.

It’s an upsetting reality they’re avoiding, and it lingered with this critic for days. Are those who aren’t destined for greatness instead destined for tedium? Is alcohol the inevitable balm for this existential state? It’s a relief that Vinterberg doesn’t press too hard on that nihilism, which his Dogma 95 colleague Lars von Trier might’ve done.

Although that muddles the message, it makes the film feel more real – the last 10 minutes are especially poignant. These issues aren’t clear-cut, lost as they are in the enjoyably inebriated haze, but the hangover can be fatal.

Another Round will be in cinemas from Friday 2 July