A kaleidoscopic portrayal of the difficulties discerning truth from lies in post-first world war Europe, from one of France's top film-makers

The bitter and male channel their grief into nationalist posturing, clinking steins in beerhalls and plotting an impossible resurgence. For Anna (Paula Beer) and the elderly Hoffmeisters (Ernst Stötzner and Marie Gruber), though, it’s enough to remember handsome doomed Frantz, a beloved fiancé and son respectively. Anna often visits the empty grave with flowers, and it’s while doing so that she comes across another mourner: the reticent, nervous Adrien (Pierre Niney).

Adrien is French, which doesn’t endear him to the locals, nor – initially – to the Hoffmeisters. But once it transpires that Adrien briefly befriended Frantz before the war, and that he can provide a deeply salving account of Frantz’s life in Paris, they warm to him. Anna too finds Frantz increasingly enjoyable company, although it’s not clear how much that is due to his evocation of her late beloved.

The unorthodox family unit ticks along quite happily for a while, but it can’t last; the presence of the Frenchman is disgruntling the resident flag-wavers, and anyway there are tearful revelations on the horizon. The way these disclosures chime or clash with the rumblings of nationalism have distressing emotional implications for Anna and the Hoffmeisters, but interesting thematic implications for the film.

Much money goes into trying to make period dramas realistic. The attempt to make a modern, slick movie seem like it’s convincingly set in the past – in a time before modern cameras, before slick cinematography – is inherently self-defeating, but there’s often something so ‘handsome’ or ‘sumptuous’ about these films that we don’t notice the contradiction. 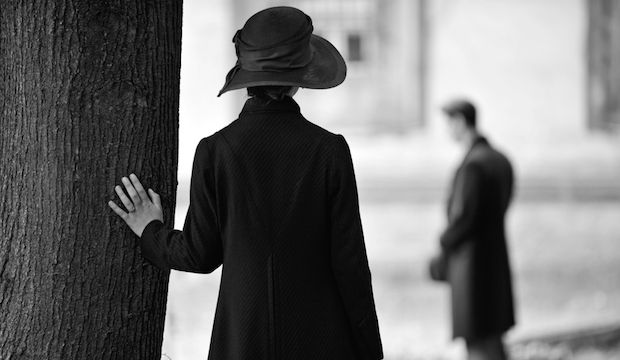 Frantz tackles this issue in a way that both does and doesn’t work. It’s mostly in black and white, a monochrome that draws attention to how much it doesn’t resemble the grey-scale of old movies. While this means it’s not especially enchanting to look at (the composition rarely compensates for the lack of colour) it also makes the drama seem curiously modern, and stops the emotions of the characters from feeling too remote.

It helps that Niney has the kind of steep pale face that seems absolutely to have leaned out of an archive photo, but also imbues Adrien with a nervy energy that brings him to life. Beer too makes Anna engagingly modern: independent-minded, but realistically so within the confines of the era. These performances are vital. Without the finely-balanced emoting of its leads, Frantz would be a flat melodrama rather than an interesting one.