Rules Don't Apply is a sharper, smarter film than it first appears, and Warren Beatty steals the show as Howard Hughes

Rules Don't Apply film review 4 Rules Don't Apply film review Matthew Robinson
After taking the fall for the biggest Oscars screw-up in history, famously oversexed actor Warren Beatty has redeemed himself with this enjoyable non-rom-com, a semi-faux-biopic of legendarily oversexed director Howard Hughes. That’s if you believe he needs redeeming, of course – we still think Faye Dunaway is the one who so cruelly disappointed La La Land.

Like La La Land, Rules Don’t Apply is Tinseltown film – a movie about the movies, the people who want to be in them, and what they’re willing to do in order to ‘make it’. But whereas La La Land was a romantic film with a modern, wised-up surface, Rules Don’t Apply smuggles in some bitter truths about Hollywood (and sex) under its rose-tinted patina.

It’s 1958, and Marla Mabrey (Lily Collins, perky) is one of many wannabe actresses trying to become a star in Howard Hughes’ constellation. Each of these young women have been promised a screen test by the eccentric and mysterious billionaire, but none of them have met him. Waiting for an introduction, they live curated lives in Los Angeles, paddocked in gated houses and provided with drivers who are instructed to chaperone and spy on them.

Marla’s driver is Frank Forbes (Alden Ehrenreich, hard to pronounce but easy on the eye), who’s also hoping to meet Hughes. Frank wants to ply Hughes with a real estate proposal, but this depends on him not falling for Marla – Hughes has forbidden his drivers to become romantically involved with the actresses they’re ferrying about. This is easier said than done, etc.

So far, so typical, and the promotional material has sold Rules Don’t Apply as exactly the period-set fluff-fest that the above précis suggests: the acronymic and handsomely-browed protagonists swooning under Hughes’ grandfatherly auspice. But Beatty has been a Hollywood stalwart – and sex symbol – for too long to make a film so naïve. 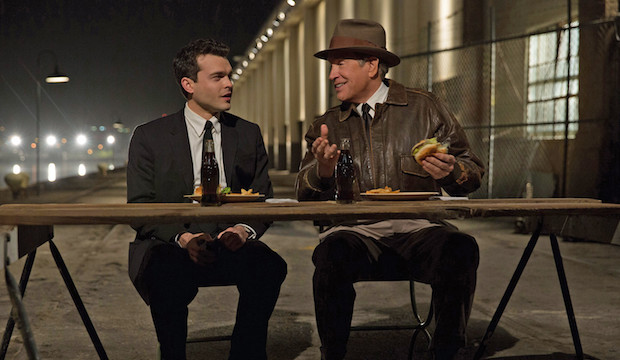 Both Marla and Frank are church-going and virginal, and Beatty doesn’t hesitate to give them a full dose of disillusionment. His Howard Hughes is certainly more twinkle-eyed than Leonardo DiCaprio’s in The Aviator, and in some of the broadest moments his performance recalls The Simpsons’ take on the Hughes myth, but he’s also a brilliant and funny figure of patriarchal selfishness. Rather than being the best thing to happen to Marla and Frank, as they’d hoped, he turns out to be the worst thing – while being the best thing in the film.

It would be nice to say that Hughes’ increasingly erratic behaviour pushes the film towards darker, Mulholland Drive territory, but Rules Don’t Apply never breaks out of its genre into true lunacy. That’s not a problem. Beatty’s film is still romantic, but it’s the wryer, grown-up romance formed by the kind of experience – professional, personal – that Beatty has presumably had in spades. He’s achieved something all-too-rare in comedy: a balance between sweetness and cynicism. But will anyone trust him with an Oscar?