Raw film review 4 Raw film review Matthew Robinson
How delicious. Raw is a movie that chews up two tricky contemporary themes – vegetarianism and university sexual politics – into a bright, bloody mess; even if the result isn’t as substantial as it could be, it’s still a real mouthful with lingering flavour.

French teen Justine (Garance Marillier) is a straight-A student and fastidious vegetarian. Arriving at the college already attended by her tough and disdainful sister Alexia (Ella Rumpf) is a shock to the system – both the residents of her brutalist accommodation block and the newbies on her course undergo rough initiation rituals en masse. Rooms are trashed, residents coated in blood and paint, and veterinary students are forced to swallow raw rabbit kidneys.

The kidneys are Justine’s first taste of flesh, and she suffers side effects. Some of these are normal (ingesting raw animal organs can make you ill, kids), but others are less explicable, such as new cravings that can’t be sated by a bean salad or mushroom burger. Without quite knowing what’s happened to her, Justine is smuggling schnitzels out of the dining room and eyeing up her tasty gay roommate Adrien (Rabah Naït Oufella) with an unsavoury mix of carnal hungers.

There’s almost too much potential subtext here, and it’s arguable that Raw doesn’t add up to much more than a top-notch horror film in arty French dressing. The toothsome question of where our food comes from will make a great horror film one day, but Raw is not about the meat industry and the ethics of killing for gustatory pleasure; nor does it really use cannibalism as a metaphor for consent and casual sex, despite initial allusions.

Instead, it’s merely the best ever cinematic allegory for the first week on university campus. It’s all here: the rash relationships, the tentative friendships, the hunger (both sexual and pot-noodle-related), the fear of being different, the regrettable moments that you’ll always find mortifying, the fresher’s flu… Raw takes those feverish days of adjustment and makes them nightmarish and funny.

It’s not for the squeamish, but icky moments are pretty well-signposted: buy a large popcorn to hide behind. For those who can stomach it, Raw is a treat. 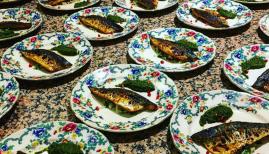