The Greasy Strangler isn't quite as bad as it sounds, which is its main flaw

Brayden is a middle-aged sad sack who lives with his father, Big Ronnie. Brayden and Big Ronnie operate a disco-themed walking-tour of their hometown: dressed in matching pink turtlenecks and pink shorts, the gruesome twosome half-heartedly show punters where the Bee Gees once bought milk (or something).

Wait! There’s more. Big Ronnie has an obsession with ‘grease’. It’s not clear what kind of grease this is – it seems to be interchangeable with oil and purée, it’s apparently edible, and you can buy it in vats – but Big Ronnie likes to have this substance in his coffee and over his food. He also likes to slather himself in it and stalk around at night, strangling people until their eyeballs pop out.

You might think that’s two amusing prosthetic joke-shop penises too many. Fair enough. But if you think that The Greasy Strangler sounds like it could be one of the best films ever – if you’re rubbing your hands with glee at the promise of campy vileness and preparing yourself for a real ‘hoot’ – then you're only setting yourself up for disappointment. 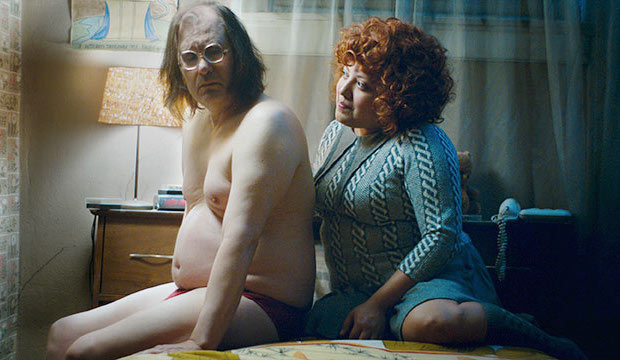 Brayden and love-interest Janet in The Greasy Strangler

For a film that’s supposed to be a celebration of bad taste, The Greasy Strangler is directed with remarkable decorum, with none of the correspondingly shoddy camerawork of early Peter Jackson (whose Bad Taste justified its title). Cinematographically, The Greasy Strangler is almost as elegantly composed as a Joe Wright period drama. The soundtrack consists of keyboard squelches by Andrew Hung of the critically acclaimed band Fuck Buttons, meaning that The Greasy Strangler’s soundtrack has the hippest pedigree that money can buy.

Maybe we just find it grating that The Greasy Strangler is being marketed to the mainstream as an ‘instant’ underground classic, when it’s hard to imagine anyone being genuinely shocked by it. It’s gourmet junk food, which is never as good as actual junk food.

Look: The Greasy Strangler doesn’t want a five-star rating and poster-ready quote from a respectable culture website. It wants video rental-shop notoriety. It wants to be the cult film of 1992. But ‘cult’ means something different in the age of the Internet, where every foetid corner hides something at least twice as WTF NFSW LOL as The Greasy Strangler, a midnight movie that's neither as good or as bad as it needs to be.