Lo And Behold: Reveries of the Connected World film review ★★★★★

Do you like Werner Herzog movies? Have you seen 'Werner Herzog Eats His Shoe? Do you know how weird this guy is? His Lo and Behold documentary is no exception

Werner Herzog ­– with his gothic sensibility, his breathy lugubrious voiceover, and his depressive weltanschauung ­– is one of the biggest targets in the doc-making world, but has avoided outright mockery by repeatedly showing that he’s in on the joke. These canny performances have hitherto been restricted to cute cameos in other peoples’ films and deadpan humour in his own, but Lo and Behold shows what can happen when a directorial ‘personality’ feels beholden to (or becomes overly enamoured of) their own shtick.

Herzog’s shtick is German-philosopher despair with a twist of knowing mischievousness, which could have been perfect for Lo and Behold, a film that encompasses advanced technology, futurist predictions, and the Internet. The ‘net is a subject that a mixture of dismay, wonder, and amusement would be perfect for, tonally; but such a film would also benefit from having a moral centre to balance any voyeuristic or sensationalist impulses, and in this sense Herzog’s subject gets the better of him. He foregoes understanding for a quick and gleeful scan of weirdness, perhaps because that’s what he’s famously good at. 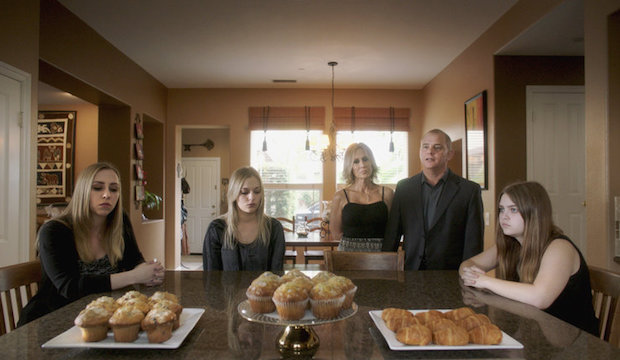 Specifically, Herzog is good at grotesques, and filming his subjects in such a way that they come across as strange and deluded. This didn’t matter in his famous documentary Grizzly Man because Timothy Treadwell (who had a fatal dedication to bears) was a genuine kook, and his unhappy death was an urban myth-grade story worthy of Herzog’s clammy interest. But when the same tone is deployed in Lo and Behold it comes across as gratuitously macabre.

Lo and Behold’s low point is an interview with the family of a teenage girl whose gruesome post-mortem photos were spread around the Internet. Her parents and sisters are still understandably distressed, but nothing in the way that Herzog films them suggests that he feels any sympathy, and in the context of the film’s impishness their representation is borderline disrespectful. Herzog doesn’t have to agree with the mother that the Internet is the manifestation of the antichrist, but he also doesn’t have to make her family look like stiff and fearful evangelists.

This tone abides in Herzog’s visits to an Internet-addiction rehab centre and a commune for people who are made ill by cellular waves. As with Louis Theroux’s recent Scientology film, the pursuit of oddball OMG moments threatens to supplant a genuinely curious and investigative spirit. And, as with Theroux, the results are still very enjoyable – they’re just not as good as we’ve come to expect.