Guy Pearce and Dakota Fanning duel in this gory Western that is guilty of thematic overkill, and isn't quite the Deadwood movie we were hoping for

The message is clear: subtlety will be conspicuously absent in Martin Kolhooven’s violent and perverse Western, where a mute Dakota Fanning duels with a loud Guy Pearce.

Fanning plays Liz Brundy, a devoted wife and mother whose life is turned upside down when she fails to deliver a baby without having to let either the mother or the child die. This incident sparks a conflict with Pearce’s Reverend, a Dutch-born preacher whose interest in Liz forms the dramatic meat, such as it is, of a brutal tale told over the course of four chapters: Revelation, Exodus, Genesis and Retribution.

One can almost hear Paul Verhoeven telling his fellow countryman to tone it down.

The presence of Kit Harington and Carice Van Houten, not to mention a sizable serving of incest and death, are likely to invite comparisons with Game of Thrones (although fans of that series should know that the actors in question appear in the worst segment of the film).

However, a more apt example, given the Western setting and the prominent role played by a saloon/brothel, would be another HBO series: Deadwood, of which the second chapter appears to be a pale imitation, with none of the vulgar poetry associated with David Milch’s writing. 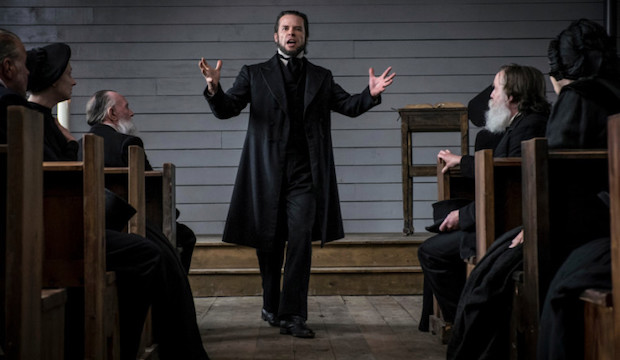 The aforementioned Verhoeven would probably handle this material with his usual mix of brutality and tongue-in-cheek humour. The latter’s absence, even when the script begs for it (see Pearce’s gradual transformation into an unstoppable bogeyman), is Brimstone’s ultimate downfall, as we move from one exercise in nastiness to the next.

The result is a great-looking but hollow endurance test, whose main saving grace in between death scenes is Fanning’s nuanced performance – a necessary and welcome counterpoint to Pearce’s increasingly grating hamminess.

All in all, this wildly excessive undertaking (it clocks in at just under two and a half hours) might prove interesting to die-hard fans of violent Westerns. Those looking for anything beyond creative displays of gore are best served rewatching Deadwood, or Clint Eastwood’s Unforgiven.

The BFI London Film Festival 2017: tickets to book before they sell out
Sign up to CW’s newsletter
By entering my email I agree to the CultureWhisper Privacy Policy (we won`t share data & you can unsubscribe anytime).