In Darren Aronofsky's mother!, Jennifer Lawrence and Javier Bardem are caught in a whirlwind of chaos and confusion of Biblical proportions that somehow makes complete and utter sense

1 CW reader is interested
mother! film review 5 mother! film review Daniel Lewis
It’s no secret that mother! has been a mystery. For months, all we’ve had is a trickle of disturbing posters, disjointed trailers and the director Darren Aronofsky turning up to press conferences just to say that he’s not going to say anything about the film.

mother! begins in much the same mystifying sense of unease that characterised the publicity campaign and other films by Aronofsky, like Requiem for a Dream and Black Swan.

Javier Bardem plays a poet struggling for inspiration who is staying in a cavernous timber-frame Gothic mansion in the middle of nowhere with his partner, played by Jennifer Lawrence.

She is in the middle of decorating the house, the poet’s childhood home, that she has rebuilt piece by piece after it was completely destroyed in a fire. This is where all the action happens.

TRY CULTURE WHISPER
Receive free tickets & insider tips to unlock the best of London — direct to your inbox
The peace and quiet is disturbed when fans of the poet, a (very sensual) couple played by Ed Harris and Michelle Pfeiffer, turn up on the doorstep. Flattered, the poet immediately takes them in but his partner, understandably, is less keen.

This ensemble is expertly cast; each actor becomes more convincing the more like caricatures of themselves they become. Javier Bardem is intimidatingly self-possessed and Michelle Pfeiffer channels a knowing slinkiness and a ‘Real Housewives’ bitchiness that elicit a few bouts of (nervous) laughter from the audience.

Their interactions are unsettling enough but, quickly, mother! builds to a deafening crescendo. And with pretty obvious overtones. The poet, worrying over his work, is referred to as Him. And Lawrence’s character, Mother, is missing a couple of syllables after her name. Get it?

You may roll your eyes at just how thinly-veiled the allegory/analogy is but really the obviousness is part of the point. The merit of mother! is more in the showing than the telling. That becomes clear around the 45-minute mark.

Aronofsky exchanges uncomfortable drama for a full frontal and unrelenting assault on the senses. He distils all of our murky conversations about religion, nature, gender, into nerve-wracking, gobsmacking action.

Along with the slowly emerging, impossibly big themes, and heavily loaded dialogue, come big noises and even bigger crowds, as the poet admits more and more guests into the house. (Clearly, there's no shortage of extras in Hollywood).

As all these people inevitably clash, it all gets very, very explosive. How could it not? mother! packs 2000 years of bloody and irresponsible human conflict into two hours. It proves, in the most basic sense (sorry Sartre), that hell is other people. 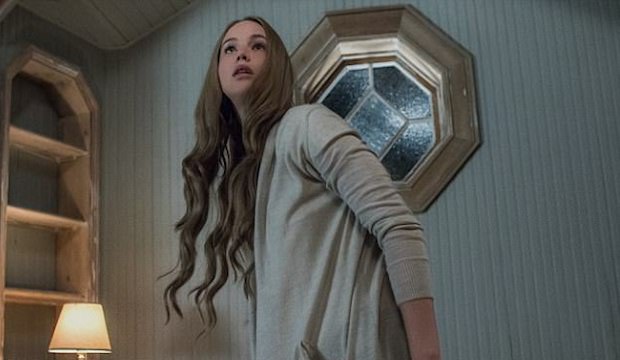 Although the film shows that the burden is on Mother – the majority of the film is close-ups of Jennifer Lawrence’s frightened face – you start to realise you’re being forced to carry some of the weight too.

For this reason, mother! will be divisive.

In times of uncertainty and anxiety, some people hope the arts will soothe them, mollycoddle them, or 'mother' them, even. Fair enough; it's the La La Land syndrome. We all suffer from it.

There are others, though, like Aronofsky who chose instead to face the issues head on and dive into the fire – and he’s willing to get burnt. mother! opened at the Venice Film Festival to rave reviews as well as boos. No wonder. The film is so angry and aggressive and ugly that sometimes you want to make some noise in self-defence or just make it stop.

But it’s also an incredibly desperate film. Even through all the distracting noises, a crystal clear cry for help can be heard, and that’s what keeps you in your seat.

The bottom line: mother! won’t necessarily make you feel good, but it will definitely make you sit up and pay attention. And it may just move you.

Kathryn Bigelow is bearing witness with her film Detroit, and it's complicated
Sign up to CW’s newsletter
By entering my email I agree to the CultureWhisper Privacy Policy (we won`t share data & you can unsubscribe anytime).
1