La La Land, Moonlight, and the very best outdoor cinema London has to offer this summer — book before it sells out 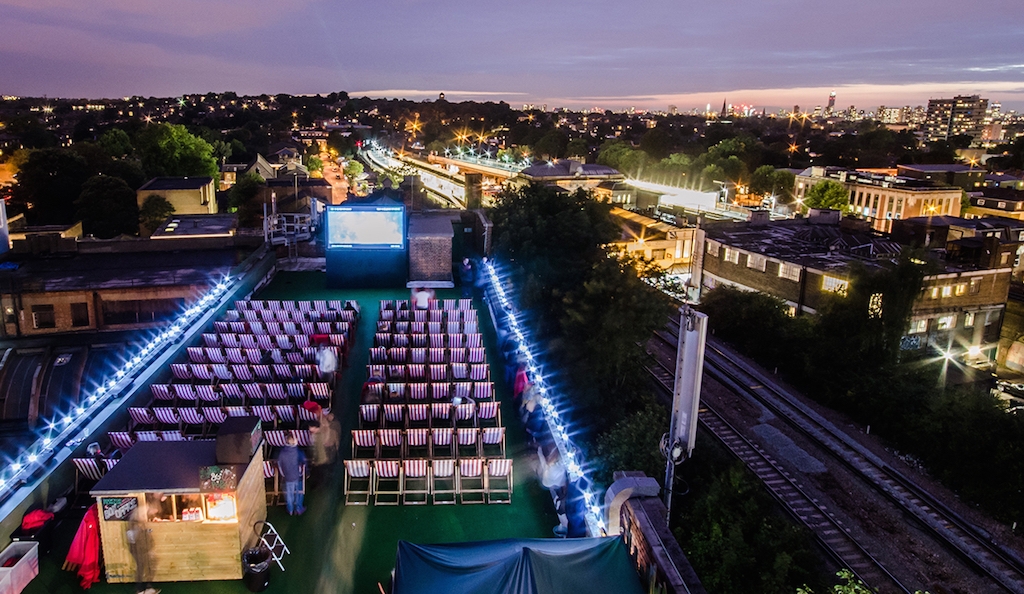 Outdoor Cinema 2017 London
As the sun shines and the days lengthen, London unbuttons itself and wheels its culture into the open air. Outdoor screenings are popping up across the capital: in neoclassical courtyards and cemeteries, on canal boats and rooftops.

TRY CULTURE WHISPER
Receive free tickets & insider tips to unlock the best of London — direct to your inbox
What better way to while away a balmy evening than watching classic films or fresh releases at an outdoor cinema? UK summer can be short and unreliable, so make the most of it with our guide to the best of London open air pop up cinema.
Luna Cinema 14 June - 21 September 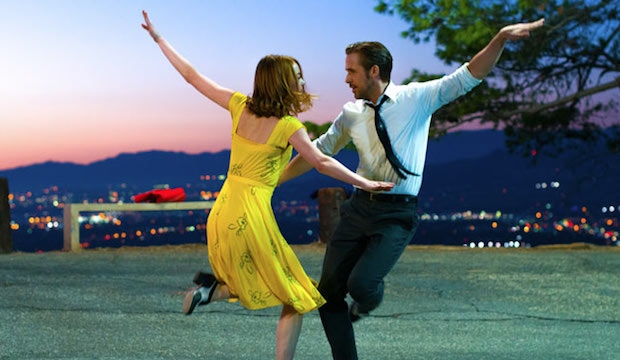 Luna cinema is always a staple of outdoor cinema in London.

The biggest draw this year is La La Land. It's one of our favourite recent films, deserving every one of its six Oscars, and there's something incredibly appealing about the idea of its brilliant tunes floating through the dusk. It's being shown at Hampton Court Palace alongside two evergreen classics, Emile Ardolino’s show-stopper Dirty Dancing, and the quintessentially British rom-com, Four Weddings and a Funeral starring Hugh Grant. If you’re looking for something a little creepier, there’s always Jaws at Brockwell Lido, where premium tickets will get you a seat on a dinghy in the pool.

There are plenty of other films at a wide range of locations all over London, however – so check out the list and find a favourite! 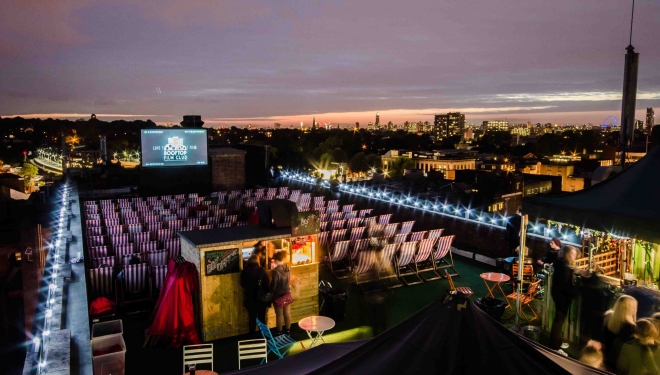 It's pretty much how it sounds – rooftop cinema is outdoor cinema, but taller.

Taking place across four locations in Peckham, Shoreditch, Stratford, and Kensington, Rooftop Film Club takes you up into the sky for a great range of screenings. As well as Moonlight and La La Land (somewhat ubiquitous at outdoor screenings this summer), there are classics like Vertigo and Mary Poppins and blockbusters like Fantastic Beasts.

Buy a ticket and head to the roof! 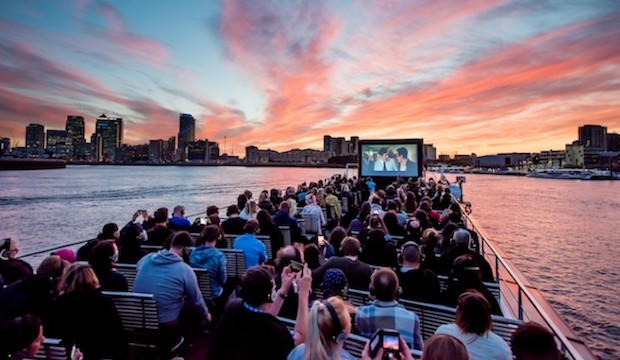 The drive-through becomes a sail-through with London’s first cruising cinema.

Time-Out have teamed up with City Cruises this month to offer you a unique trip up the Thames, from Tower Pier towards the Isle of Dogs and passing under Tower Bridge. With such an iconic vista slipping by you might have trouble keeping your eyes fixed on the screen. Luckily, Time-Out have got that under control with another attention-grabbing line-up of classics. There’s Clueless, Casablanca and, sticking to the aqua theme, The Little Mermaid.

Looks like this will be a popular one so book your ticket asap! 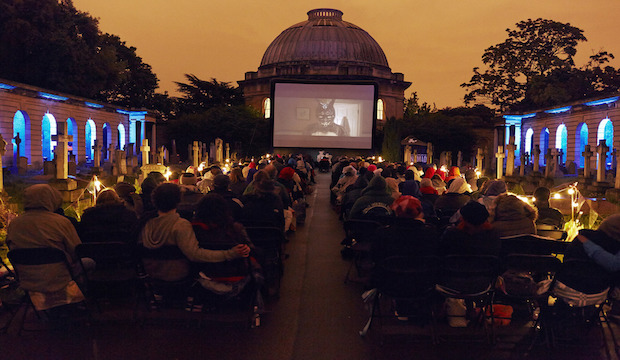 True to it’s name, The Nomad will be lugging its screen all over London this summer.

With backdrops that include St. Paul’s Cathedral, Grosvenor Square and Queen’s Park, you’re as likely to choose from a bespoke list of venues as by film. Nomad have got that covered as well in a season that brings together feel-good classics like Mamma Mia or Back to the Future, and some spookier options: Hitchcock’s Psycho or the vintage sci-fi movie Aliens. To top it off, all proceeds go to Nomad charity The Sustainability Institute, which works to improve the lives of children in South Africa.

That makes Nomad our most wholesome outdoor cinema experience - book a ticket and feel virtuous now. 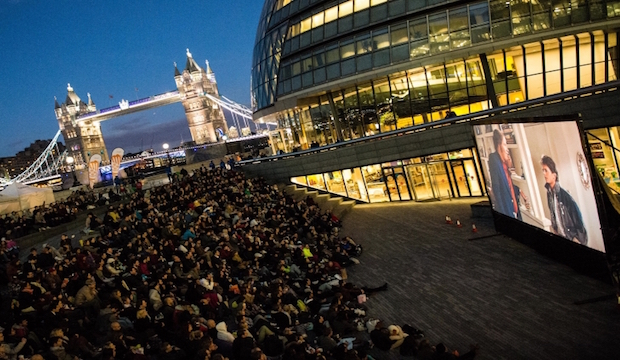 A free one this time: Tuesday night is film night at the Scoop amphitheatre.

As part of the capital’s largest free festival, Scoop are running a series of screenings beneath the lights of Tower Bridge. Bring your own cushion and find a seat in the 1,000-seater concrete amphitheatre. You’ve got light-hearted options like Johnny English and Cool Runnings, or a more serious epic, Avatar, to choose from.

Tickets are first-come, first-served so just show up a bit early to get your prime slot before the big screen. 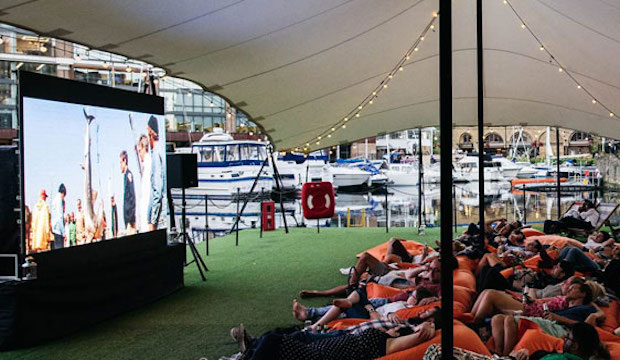 Installed on the floating pontoon at St Katharine’s Dock, here’s another waterside experience.

With only a fortnight to play with, the St Kat’s team have compiled a selective programme. That means strictly Hollywood blockbusters: we’ve got Mean Girls, Skyfall, and a bit more La La Land. Bean bags are provided this time, along with deckchairs and a selection of snacks and craft beer. This might be London’s classiest outdoor cinema.

Tickets will be available shortly so keep your ear to the dock. 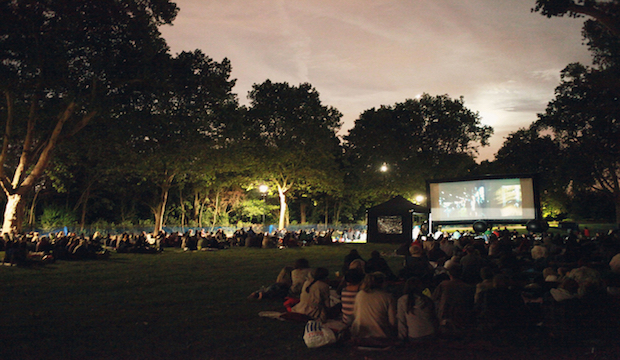 With a cinema that consists of one giant screen inflated on site, this is pop up taken literally.

Thanks to their readily transported design, Pop Up Screens can offer the widest range of London locations, from Coram’s Fields to Canada Waters. Their movie line-up is just as extensive: July kicks off with the ultimate 90s rom-com, 10 Things I Hate About You, to be followed by Luhrmann's The Great Gatsby and the new Beauty and the Beast, naming just a few.

There’s plenty of showings to choose from – just make sure you book before it’s too late.