Lady Macbeth is a cold, composed drama with a superb performance at its centre

1 CW reader is interested
Lady Macbeth film review 4 Lady Macbeth film review Milica Dusanovic
When we first meet Katherine (Florence Pugh), she’s singing a song she doesn’t know and doesn’t care for. It’s her wedding day, and her face is partially obscured by a white veil, but it’s still obvious that she’s unenthusiastically mouthing the hymn. You can tell she’s deciding that ‘wife’ isn’t a role that suits her any more than ‘church-goer’.

‘I’m thick-skinned’, she warns her vile husband after the ceremony. And so she proves to be; but she’s constantly writhing around inside that skin, alive to her own desires and how they might be fulfilled. Pugh embodies her contradictions and depths with impressive minimalism, making Katherine curious, cruel, disdainful, joyous, mischievous, sloppy, ruthless and proud – an achievement all the more impressive considering how sparse, functional and non-Shakespearian the script is.

Katherine is explicitly the property of a bilious, sneering father-son duo. Along with a plot of land in north-east England, Katherine has been sold to miserly magnate Boris and pressganged into marriage the miserly, middle-aged Alexander. Neither man seems satisfied by the deal, and, for unknown reasons – ­sexuality, perhaps, or some nameless hang-up –­­­­­­­ Alexander has no interest in bedding his young bride.

This only adds to Katherine’s dissatisfactions. Forbidden to go outside, she’s obliged to spend her days in a sexless, sofa-bound stupor. Sometimes she makes a half-hearted attempt to be the lady of the house, but such a lusty child of the wet and wild moorland can’t be content with prayer books and tea. 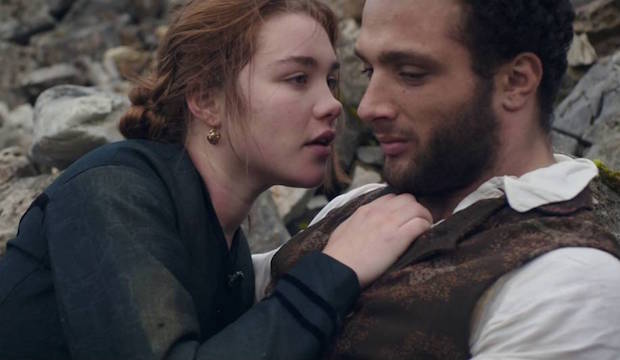 Florence Pugh as Katherine and Cosmo Jarvis as Sebastian

Hence her affair with the property’s new groomsman. Sebastian (Cosmo Jarvis) is a rogue so sooty and grimy that it’s hard to tell where his black beard ends and his face begins. He’s black-eyed too, and possibly black-hearted, although – as it turns out – there are different shades of cardiological darkness, and the inkiest inclinations can be sequestered under the most porcelain breast. It’s not long before Katherine and Sebastian’s sexual transgression leads to violence, with someone muttering the immortal words ‘it is done...!’

Like The Handmaiden, Lady Macbeth is an arty bodice-ripper that, while never skimping on the tightness of the bodices or the pleasure of the ripping, also delves into the psychological underpinnings of the genre. As with Park Chan-wook’s masterpiece, Oldroyd’s film examines the stifling of female desire while giving the satisfaction of letting that desire cut loose. In this sense, his merciless film would be empty without Pugh and her self-possession. She is its beating black heart.