Their Finest might be just feel-good fun, but when it makes you feel this good – and is this fun – that's something to appreciate

2 CW readers are interested
Their Finest film review 4 Their Finest film review Matthew Robinson
We might have just reached peak Bill Nighy. The foppish actor, chin eternally tilted past 90 degrees, has always excelled at playing hammy performers, semi-deluded and semi-brilliant. With Their Finest, Nighy tops his roles in The Boat that Rocked and Love, Actually with his performance as an ageing matinee idol in Their Finest. No one can deliver a line like ‘I’ll be in my dressing room’ with quite the same haughtiness and hurt.

Nighy’s character, Ambrose Hilliard, is just one of the many vain and insecure men that Catrin Cole (Gemma Arterton) encounters in her new job. It’s Blitz-era London, and Cole has just started working at the Ministry of Information in order to support her painter husband (Jack Huston). The government has decreed that morale needs boosting, and that the USA needs some encouragement if it’s going to join the war, so Cole has been tasked with scripting some good old-fashioned propaganda.

The male bureaucrats and hacks she encounters are invariably convinced that Cole should expect no screen credit for her work, and equal pay is out of the question (Eddie Marsan, Jeremy Irons, and Richard E. Grant almost match Nighy for watchability in these roles). Suffering condescension and unwanted flirtation alongside wage-gap woes, at least half the audience is likely to find her plight curiously familiar. 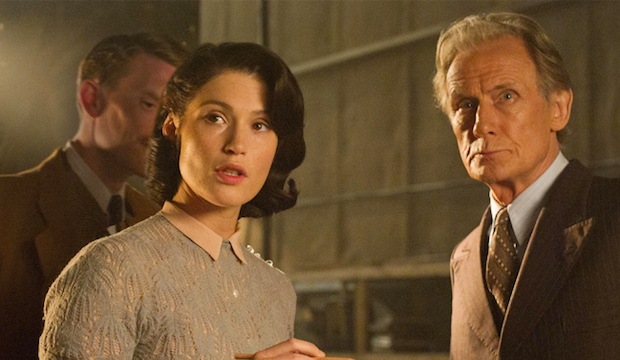 Things are made even trickier by the film that Cole is expected to write: a corny heartwarmer about two sisters using their father’s boat to rescue soldiers from Dunkirk. Then there’s her increasingly heated chemistry with curmudgeonly-but-cute writer Tom (Sam Claflin), with whom she must craft a world-beating masterpiece from this unpromising material. Claflin gives Tom wit, and pitches him between arrogance and self-effacement in a way that makes sense of those ‘young Hugh Grant’ comparisons.

It’s Arterton’s film, though, and none of the preening male characters would be bearable without her presence. Sporting a convincing Welsh accent (better, anyway, than Anne Hathaway’s Yorkshire accent in another Lone Scherfig film, One Day), she’s the heart of warmth and likeability in this warm and likeable comedy.