Things go from small to scary in this ingenious single-space drama from Mohamed Diab, set amid unrest in Egypt in 2013

Clash film review 4 Clash film review Matthew Robinson
There are two types of single-location films. There are your dramas, your script-heavy chamber-pieces, in which a group of characters are trapped together and come to blows. Then there are the single-location horror films, the movies that tap into the deep existential dread of confinement. Clash starts off as the former and develops into the latter.

It’s tonal transition that not only stops Clash feeling like an adaption of a play – which many single-location dramas are, for obvious reasons – but also brings the reality of political and social unrest into terrifying close-up. Mohamed Diab’s film contains notes of comedy, but by the time the credits roll it’s hard not to see George A. Romero’s Dawn of the Dead as an influence on Clash.

It’s 2013, and the Egyptian military has just toppled the Muslim Brotherhood government (which was installed after the 2011 revolution that toppled Hosni Mubarak). The streets of Cairo are full of pro-army supporters clashing with Brotherhood members, and military police are indiscriminately pulling protesters into reinforced vans.

It’s into one such van that they throw an Egyptian-American AP journalist, his photographer, a couple and their adolescent son, a young woman and her elderly father. This wouldn’t be so bad if they weren’t then joined by a whole crush of agitators and political organisers from both sides of the conflict.

The ‘clash’ of the title is inevitable, and cleverly choreographed within the confines of the portable prison cell. Accusations are made, insults and blows are exchanged, and collateral damage is incurred by those who’d rather be elsewhere. 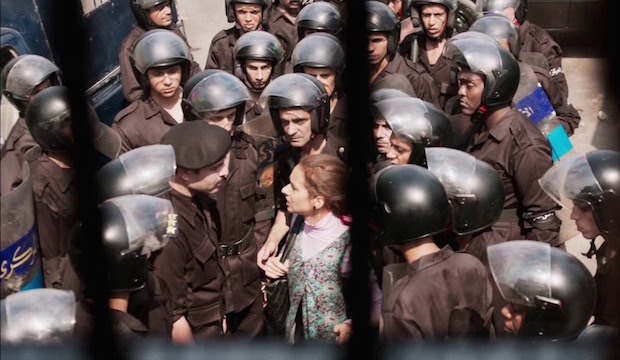 Diab himself doesn’t pick a side – he’s content to let the dynamic be marred by human flaws and misunderstandings, and humanise the reluctant congregation with moments of grace. The presence of the young and elderly give the more aggressive captives a chance to be redemptively kind, even while resentments are still boiling.

This is (almost) the comedy aspect of Clash. The tragic element is that, while the social microcosm are learning to adjust to each other, the waves of hurt and violence outside are gathering increasing force. The new acquaintances are no longer the biggest threat too each other, and can only watch in terror as a mass of angry young men (politically unidentifiable, crucially) take their frustrations out on everything in their path.

Seen in retrospect, the outcome seems as inevitable as a news story; while you’re watching it, though, Clash’s well-handled realism makes it seem like anything could happen.

Despite some pacing issues – it’s not easy to sustain consistently the pitch at which Clash starts – Diab’s film is gripping, and the occasionally flat script still manages to make its characters sympathetic while the camerawork makes them distinct from the crush of bodies.

If only for a moment, Clash picks out a few faces from the crowd, restoring to them their individuality and accountability.