Keeley Hawes, Michael Stuhlbarg, and Emma Appleton star in Traitors, a new post-war espionage thriller from Channel 4. World War II is over, but the Cold War is just beginning

1 CW reader is interested
Traitors, Channel 4 review Traitors, Channel 4 review Euan Franklin
Chilly, post-war thrillers make their money out of exciting confusion. Conspirators are murdered, agents have sex, and beautiful people have wild adventures against a political backdrop. It’s often hard to understand what the hell is going on, namely in the context or the details of the mission, but that hardly matters – we’re in it for the rough and intelligent ride (a ride John le Carré adaptations have enjoyed for years).

But Traitors makes everything too complicated, too obscure, and too annoying in areas striving to be simple.

Set in London shortly after WWII concluded for the British, the country is seeking more left-leaning alliances – which American operatives are terrified of. Feef (Emma Appleton), a Tory, has a long fling with a CIA spy (Matt Lauria), who encourages her to infiltrate the British government and snuff out any possible Soviets working undercover. 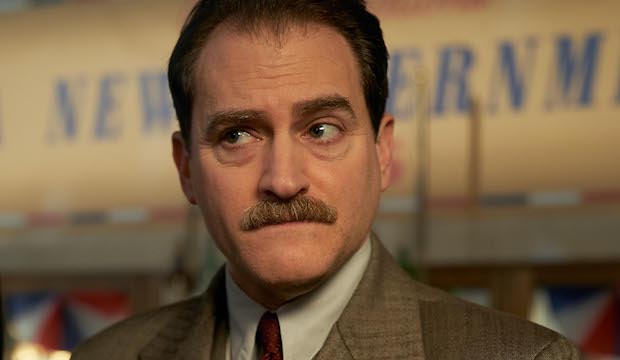 Michael Stuhlbarg (Call Me By Your Name) as Rowe, the head of Feef's mission

Dearblah Walsh wrote the teleplay, and, like her previous efforts in Outlaw King, her writing feels like it’s been cut to barely readable pieces. It’s hard to figure out who these characters are beyond their function in the story, and Walsh is desperate to speed through them like she’s running out of time.

Although last year’s The Little Drummer Girl was far from perfect, at least writer Michael Lesslie spent time unfolding le Carré’s characters. In Traitors, we’re plunged into an onslaught of images that feel like they’re being sped-up. It makes plenty of embarrassing attempts to be fast and thrilling and sexy, but the result is overloaded exhaustion. Can’t we just slow down a bit?

Traitors airs on Channel 4 at 9pm on Sunday 17th February