This special 12-hour live broadcast sees one continuous shot moving through Osea island. Sam (Jude Law) has been chosen as the father, but has to fulfil a gruelling initiation first

Although this episode was meticulously planned, the live aspect creates an uneasy, unpredictable atmosphere. It allows spontaneous details to supply the ambience. This is apparent right away, as the Camera – appearing like a concerned, phantom protagonist – slowly crosses the wet causeway to Osea island. The shapes of the clouds, the drizzle on the lens, the songs of the seagulls – these elements can’t be precisely managed.

It’s the perfect introduction to what lies ahead. Since the Camera is meant to be (or appears to be) a 12-hour continuous shot, this half-hour journey across the causeway unfolds in full. And this is the least difficult scene of nothing happening. 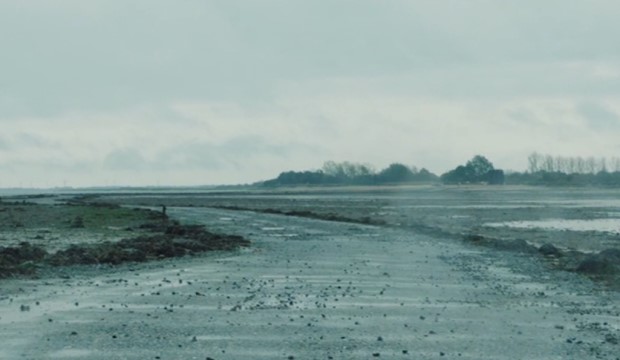 But hold on, isn’t there meant to be a plot? Yes, yes, but be patient. In the interest of brevity, this critic will skip to the important part. As seen in the last episode of Summer, Osea is in the process of appointing a new ‘Father’, who’s a kind of overseer that’ll bring peace and harmony to the island and, therefore, the world. (If you’ve been watching the series thus far, you’ll sort of understand what that means.)

Jude Law doesn’t appear until lunch time, about two hours in, when his reluctant character Sam is pulled out of the Big House to be initiated. He is their future Father. 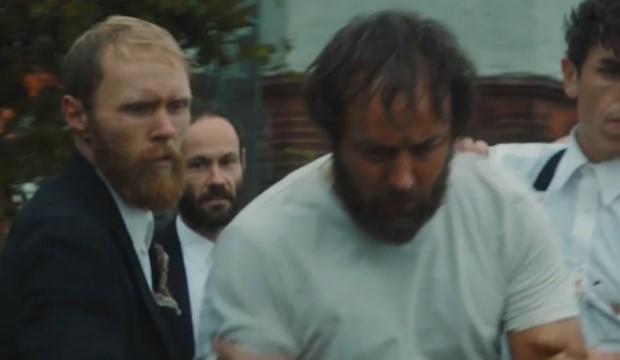 Sam (Jude Law) is pulled out of the Big House. Photo: Sky

Much of what unfolds is bloodless torture. Sam’s mocked by villagers in bizarre costumes, he’s forced to dig a hole for an hour (which you watch in full), he drags a weathered boat for what seems like miles, and he stands atop a pillar in the sea for an exhaustingly long time. It’s an extended Passion Play of sorts, enacting the sufferings of Jesus – sorry, Esus – prior to execution and resurrection.

It’s a journey that leads into the night, with Osea’s music festival blasting out ear-bleeding techno and a pastor baptising residents in a pit of liquid mud. Not an average day, then. 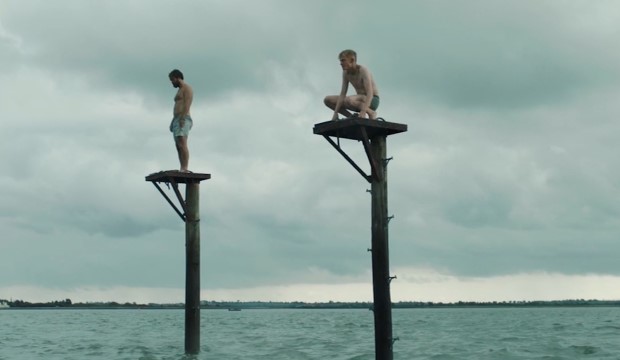 Jude Law (left), standing on a pillar in the sea. Photo: Sky

It’s worth admitting that this plot could’ve been told in an hour, under the regular mediated modes of TV storytelling. But with this extra time, you move through the world of the island, peeking into shifty characters and strange objects. It’s Osea’s character-study.

The slowness delivers a weird, perspectival ambiguity. One scene floats toward a lawn of bodies, evenly spread out. The Camera moves closer and you see they’re actually clothes waiting to be stuffed into effigies – a genius piece of visual deception in a mirage of equally beautiful visuals, which often proceed like moving paintings.

This journey through perception and into reality with a question mark makes Autumn the most fascinating TV experience of the year – maybe of the last 10. Directors Felix Barrett and Marc Munden and cinematographer Ole Birkeland have crafted a richly surreal tapestry, strangling the boundaries and weaving new possibilities. It's not for everyone, but what a ride.

The Third Day: Autumn was broadcast on Saturday 3 October from 9:30am to 9:30pm on Sky Arts. It's still available to watch on Facebook. Winter begins on Tuesday 6 October at 9pm on Sky Atlantic.