In The Third Day's third chapter, Winter, Naomie Harris enters a chilly Osea. But the community's split in two, making the island even more dangerous than before

If you sat through all 12 hours, you'd know the violence and strangeness that fogs Osea’s way of living. And you know it’s justifiable to scream when newcomers Helen (Naomie Harris) and her kids Ellie (Nico Parker) and Talulah (Charlotte Gairdner-Mihell) arrive to holiday there. 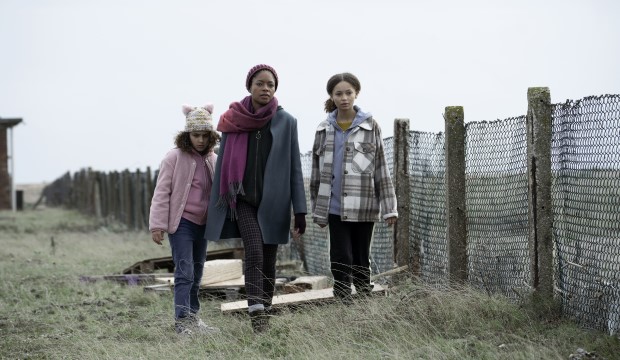 Osea isn’t as, um, friendly as it used to be. After crossing the dodgy terrain of the causeway, the approaching family see a weathered boat on shore with ‘OUT SHE DIE’ painted across the base. Buildings are painted with disturbing pictures of a man opening his wounded crotch, much like Sam’s visions of dissected animals.

There’s some kind of schism in the community, heavily suggested throughout the series but catalysed by the end of Autumn. It’s something to do with Sam’s succession to the ‘Father’ of the island. Clearly, some disagree at Sam's appointment, especially Larry (John Dalgleish) who refused a mud baptism. Is he leading a rebellion?

When Ellie approaches Larry, by chance, he talks about the Battle of Maldon (991 AD), in which the English fought and lost against the Vikings. Will a similar battle take place? A civil war? Whereas the island appeared to be bound by common purpose in Summer, the community’s division makes Osea even scarier. They can’t even control their own horror any more. 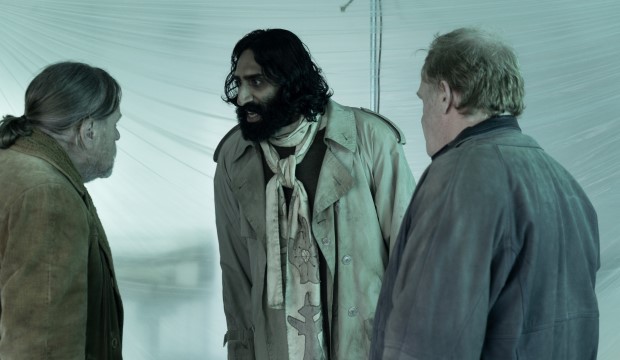 A community in crisis. Photo: Sky

Emotionally, Helen is hanging by a thread. She has a decent relationship with her kids, their arguments enjoyably puerile. Their dialogue is among the most enjoyable in the series, with all the digs and shrugs and furious love of a family in crisis. Naomie Harris is perfect in the role, able to build anxiety, to take veiled racism and abuse, while wearing the smiles of a responsible parent. But as her fear grows, those smiles begin to slip.

For a while, she’s frustrating to watch. Despite all the obvious warning signs, she insists on staying. The Third Day loves to embrace classic horror tropes and clichés while wrapping them around fully formed characters. Helen seems to be given every opportunity to leave the island – and doesn’t. She’s caring and kind, even overprotective at times, so why would she put her kids in this danger? The answer lies in the final shot, which won’t be spoiled here. Let’s just say: she has her reasons.

As with Summer and Autumn, how Winter will unfold is up in the sea-scented air. Given the directions so far, we can guess some sort of battle will take place. The friction between the two halves of the community is bound to spark some flames. Will Sam lead the army? Will Helen and her kids be caught in the middle? In this episode, you see medical equipment and malevolent stares from afar that are indicative of something portentous. This looks to be a wicked holiday...

But not to worry: Mr and Mrs Martin (Paddy Considine and Emily Watson) silently insist that Helen and the kids are safe. Yeah, right.

The Third Day: Winter airs on Tuesday 6 October at 9pm on Sky Atlantic